10 Zany (or Genius?) Plans for Green Cities of the Future

Floating cities. A building with a million residents. An oil rig turned into a tourist getaway. Some architects are dreaming of a wild green revolution. 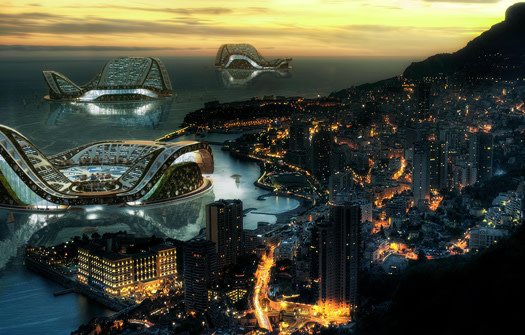 Could floating cities provide refuge for climate refugees? Can one colossal structure house 1 million people? Should offshore oil rigs be turned into luxury hotels? Around the planet, architects are pushing the limits of the possible as they explore ways to shelter and provide for a burgeoning global population without further destroying our natural world.

What follows is a run-down of some of the most inspiring and/or far-fetched ideas from architectural visionaries. Their ideas may not always seem plausible, but they provide a glimpse of a possible future in which development is driven by ecological necessity.

This image shows a floating city at night. Read on for the full details. 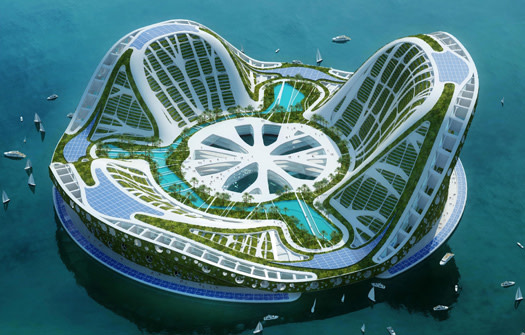 If global warming melts the world's glaciers and raises sea levels, the first to know about it will be the citizens of the Maldives, a low-lying chain of island atolls in the Indian Ocean. Belgian architect Vincent Callebaut was thinking of the Maldivians when he designed Lilypad, a floating city for climate refugees.

Each "auto-sufficient amphibious city" would house 50,000 people, and Callebaut says the cities could anchor near coastlines or float free on ocean currents. A deep-set central lagoon would collect and purify rainwater (and also act as ballast), and three mountains would support terraced housing. Artificial wetlands on lower decks would purify wastewater, and the whole city would be studded from top to bottom with solar cells and wind and tidal-power turbines. 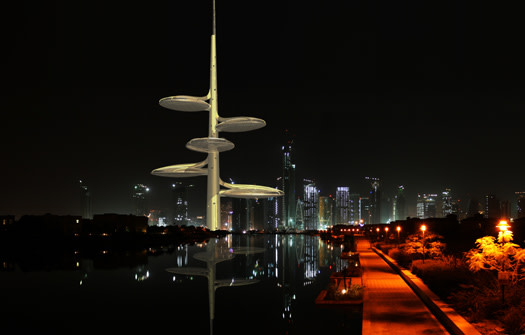 The desert city of Abu Dhabi is home to more than 800,000 people who rely on five huge desalination plants for fresh water and on imports for fresh fruit and vegetables. The Italian architecture firm STUDIOMOBILE says both these problems could be solved with its vertical seawater farm.

In this towering scheme, five "cocoon greenhouses" would be fixed on a central stalk. In each cocoon, seawater would be turned into water vapor that would cool and humidify the greenhouses, and would also be distilled to produce freshwater. While seawater greenhouses have already been tested in several pilot projects, STUDIOMOBILE's proposal dramatically super-sizes the idea. 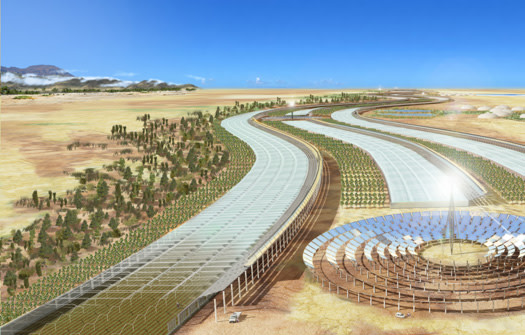 Exploration Architecture liked the seawater greenhouse concept, but it just wasn't ambitious enough. So the firm came up with an even more spectacular proposal: a solar power plant operating in conjunction with a seawater greenhouse in the world's largest desert, which would provide clean energy while also irrigating a patch of the Sahara.

As they imagine it, the Sahara Forest Project would be situated in a low-lying coastal area where seawater could be easily piped in. The water would be used in seawater greenhouses and a concentrated solar power operation, in which mirrors focus sunlight onto water boilers to push steam-powered turbines. Distilled wastewater would used to irrigate the surrounding areas, creating lush, palm tree oases where barren desert used to be. 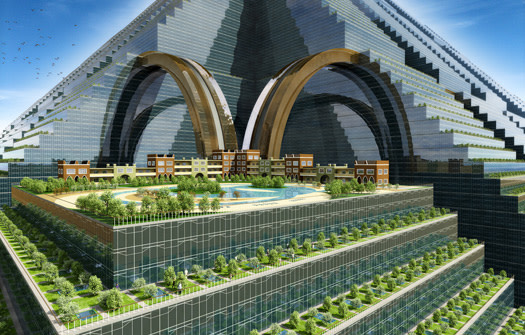 We humans continue to sprawl across the planet's surface, bulldozing the forests and mountains in our way. But it doesn't have to be that way, argues Timelinks, a sustainable design firm in the United Arab Emirates. The firm's Ziggurat is "a building-city where people, nature, and modern technology are united" in a single structure measuring about one square mile at the base, which the company says could house up to 1 million people.

Residents would commute from their living quarters to their jobs within the Ziggurat using a public transit system that's part elevator, part tram. Clean energy will be produced in sundry ways, including power generators that harness the kinetic energy of sewage flowing down through pipes. And when residents get tired of the Ziggurat, they can venture beyond its walls to the unspoiled ecosystems surrounding it. 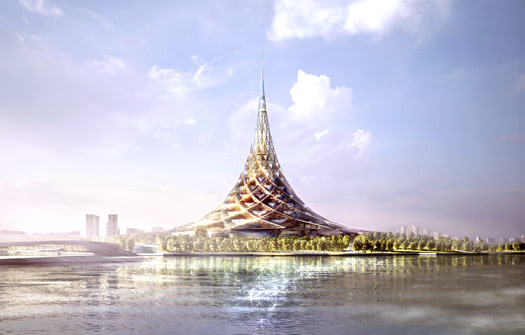 Architect Norman Foster has a track record of getting breathtaking structures built: He tossed a footbridge across London's Thames River and stuck a huge glass dome on top of Berlin's Reichstag. But his proposed Crystal Island project takes his ingenuity to a whole new scale.

On the banks of the Moscow River, Crystal Island would rise as high as the Empire State Building but spread out like a tent, covering the Nagatino peninsula with a massive structure containing apartments, hotel rooms, shops, museums, theaters, and cinemas. To increase energy efficiency, the entire building would have an outer "skin" of louvered panels that could be closed to keep out the harsh Russian winter and opened to let in cooling summer breezes. 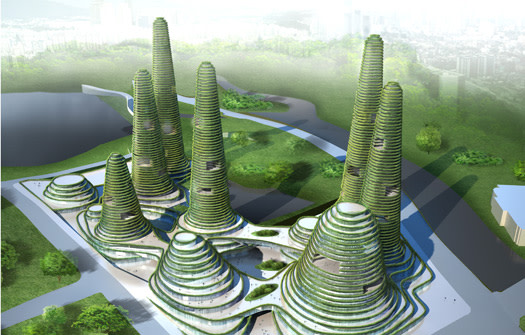 Since the turn of the millennium, the South Korean government has adopted a master planning strategy in which "power centers" packed with housing and offices are built in desirable locations to encourage new towns to grow up around them. For an entirely new town 20 miles from Seoul, the Dutch architecture firm MVRDV has proposed a network of hill-like structures that will merge harmoniously with the surrounding landscape of lakes and forests.

The new power center of Gwanggyo would feature terraced buildings with a garden on the outer edge of every floor, giving all residents access to outdoor space and growing things. The gardens will also give a green sheen to the self-sufficient town. 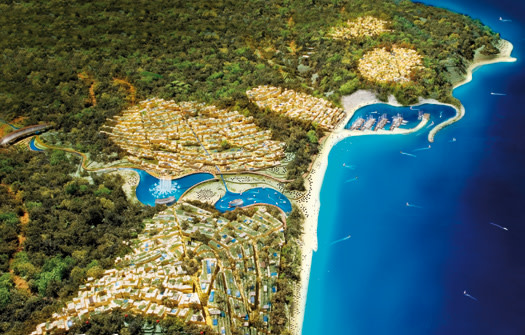 In another concept from Norman Foster and partners, a series of five hilltop towns would adorn Bulgaria's coastline and attract vacationers from far and wide. Visitors to the Black Sea Gardens would drive from inland highways and leave their cars in underground parking lots at the entrance to each village. From there, tourists and residents alike would move around the town using electric shuttle buses, communal bicycles, and the power of their own feet.

Each hill town would boast narrow streets to provide shady walkways and sunny balconies, and houses would be nestled into the hillside. At the water's edge, a marina would provide a natural gathering point and a connection to the sea. 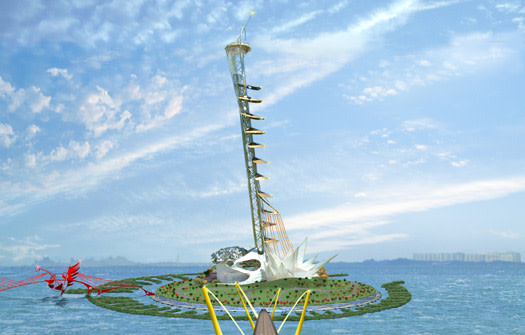 California architect Eugene Tsui first conceived of his 2,000-foot-tall tower for Oakland, but after officials balked at the idea--it would have dwarfed everything around it--he decided to bring it to Shenzhen, a booming port city in southern China.

The tower would be built on a man-made island in the bay, surrounded by mangrove swamps that would filter the polluted water, as windmills hummed on the edifice above. The tower would provide clean energy for the surrounding area, and its apex would contain restaurants and observation decks.

Tsui says that Chinese officials have previously failed to consider the environmental toll of Shenzhen's rapid growth, but notes that the tower would be an ecological symbol of a better future. 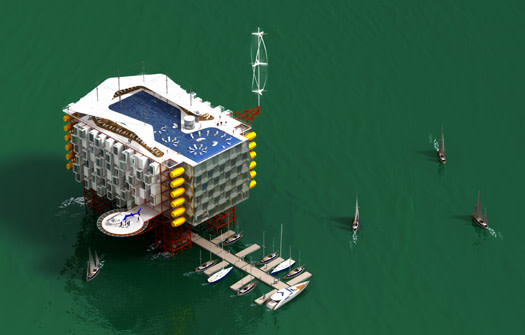 But why build a new tourist attraction when there are derelict structures just begging for a retrofit? The creative folks at Morris Architects looked at an abandoned oil-drilling platform positioned miles offshore in the Gulf of Mexico and imagined an Oil Rig Resort.

The renovation could neatly symbolize our culture's turn away from fossil fuels, the architects say, while also providing a killer locale for snorkeling, fishing, and sailing. Wind and wave energy would power the resort, and the guest rooms, modeled on barnacles clinging to the side of a ship, would have balconies that retract during bad weather.