10 Bizarre-Looking Tricks of the Weather

These may look like signs from the divine or from the aliens beyond, but actually, weather is just weird. 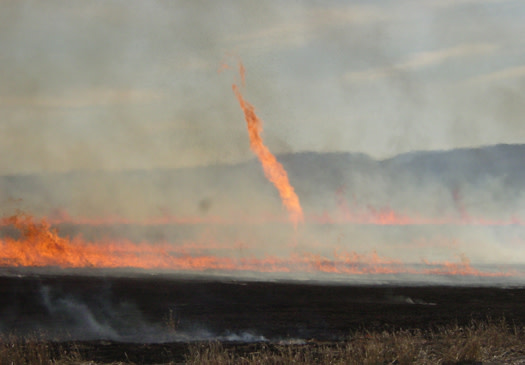 This sure was a weird winter. We've been buried under record-breaking blizzards, and for the first time in recorded history, a whopping 49 states (all but Florida) had snow on the ground at the same time. But that's nothing. Here are some truly strange and striking meteorological and atmospheric phenomena.

Cross a wildfire with a tornado and you have the catastrophic "fire whirl." The strong temperature gradient created by fires--between the hot flame and the cooler air surrounding it--can create a vortex; if the air currents and wind conditions are just right, the fire can travel upward in a whirling column. Fire whirls can extend hundreds of feet into the air, uproot trees, and cause fatalities. (A fire whirl in Japan in 1923 killed 38,000 people in a matter of minutes.) 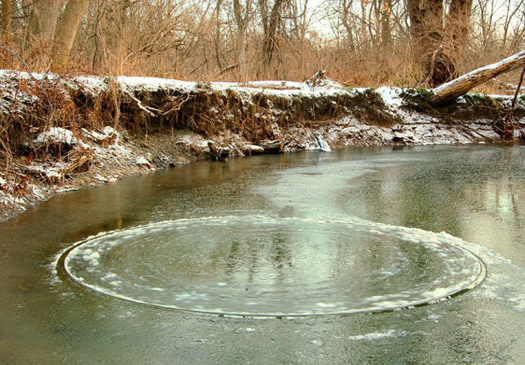 Forget crop circles. Winter's got its own mysterious phenomenon: perfect circles of ice that slowly spin in place in the water. Putting aside alien encounter jokes, there are several different theories about what causes this spectacle. The leading suggestion is that slow river currents can twist a piece of ice around; as the ice rotates, its edges are gradually worn down to form a perfect circle.

This 6-foot wide, spinning circle was discovered in Canada in 2008. 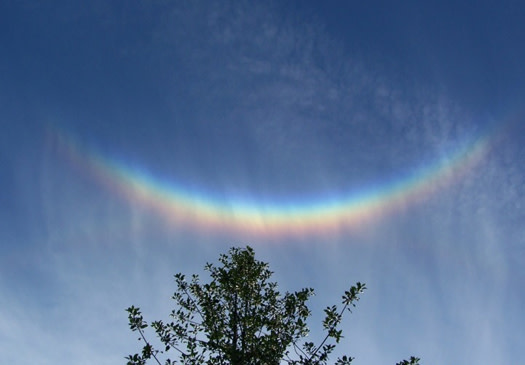 This upside-down rainbow is technically known as a circumzenithal arc.

Rainbows are formed by the refraction of the visible spectrum through drops of water. These arcs, on the other hand, form when light hits the top of ice crystals--like those contained in some kinds of clouds--and is then refracted out through the side of the crystals. 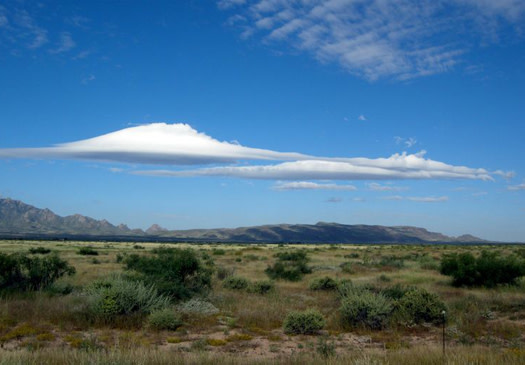 One of the least common cloud types, lenticular clouds form when mountains force air currents to travel in wave-like patterns.

Some speculate that these kinds of clouds, with their distinctive flattened, elliptical shape, have been mistaken for UFOs. Fittingly, perhaps, these clouds were photographed in southwestern New Mexico in September 2008. 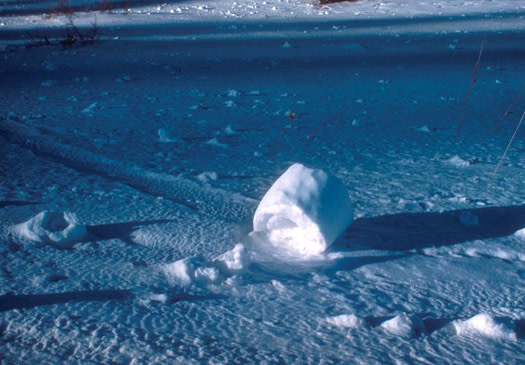 Snow rollers are a strange wintertime sighting. These cylinders of snow roll themselves, forming as the wind picks up a small piece of snow and blows it down a hill. The clump picks up more and more snow, eventually forming a cylinder.

Snow rollers are often hollow; since the center consists of loosely packed snow, it can be blown away by the wind. 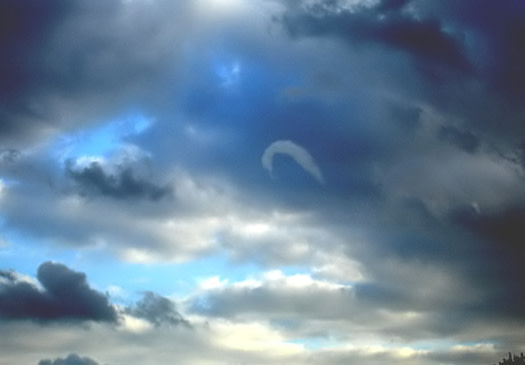 Behold, the horseshoe vortex cloud, a rare cloud formation that is exactly what it sounds like.

When such a vortex forms vertically, a tornado can result. Every once in a while, though, they can form in this strange shape, usually when a horizontal spinning air current is deformed by updraft from a cumulus cloud. 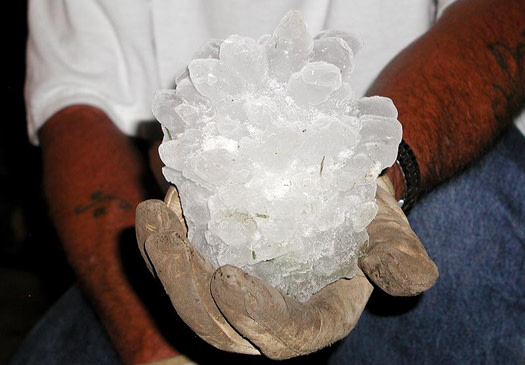 This hailstone, which measures 7 inches in diameter and has a nearly 19-inch circumference, fell in Nebraska on June 22, 2003. It is the largest hailstone ever discovered in the United States.

Hailstones are produced by severe summer thunderstorms, when frozen water droplets are tossed within a cloud and accumulate bulk until they're too heavy for the updrafts to support. They can cause serious damage to crops and property. Many efforts have been made to ward off hailstorms--in medieval Europe people rang church bells and fired cannons, and in the 20th century scientists tried cloud seeding--but nothing has been proven to work. 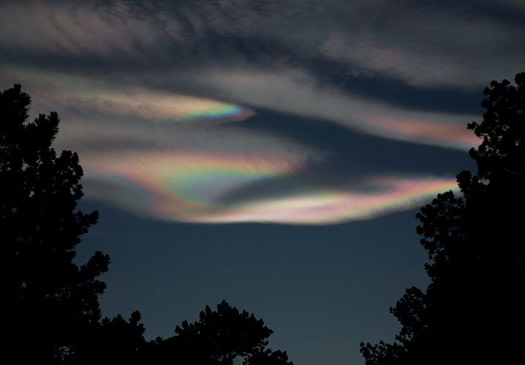 These might look a little like the northern lights, but they are, in fact, an utterly different atmospheric phenomenon known as nacreous clouds. Sometimes referred to as mother-of-pearl clouds, they form at relatively high altitudes, as far as 15 miles above sea level. That means that even after dusk, these clouds remain high enough to be illuminated by the sun.

The clouds are not uncommon in the polar regions, but they are rarely seen in the middle latitudes, as they are here, photographed in Colorado in 2006. 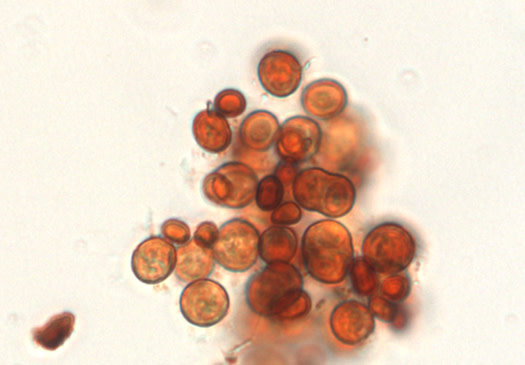 Now for a few phenomena that are even weirder. In July 2001, a strange red rain began to fall in Kerala, India. Scientists have proposed several different theories to explain the rust-colored rain; some speculated that the rain might have contained desert dust, others suggested that it might have contained fungal spores, and one pair of researchers even published a paper raising the possibility that the rain contained small particles from a meteor.

The Indian government commissioned a study [pdf] to get to the bottom of the matter, which concluded that spores from algae were indeed to blame. But the scientists had no answer to how enough spores got into the atmosphere to color the rain. 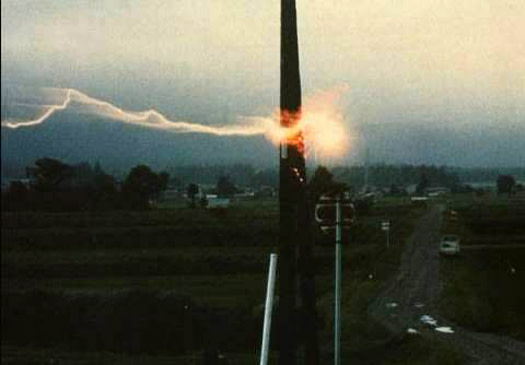 Ball lightning is a controversial phenomenon. For centuries, people have reported seeing glowing, electrically charged balls of light in the sky. Scientists, however, remain unable to explain the sightings or even verify that ball lightning exists. Experts disagree on whether even the photos are authentic.

The debatable existence of this nifty form of "unconventional plasma" hasn't stopped it from showing up in literature; it has made appearances in works ranging from The Adventures of Tintin to a Pynchon novel.