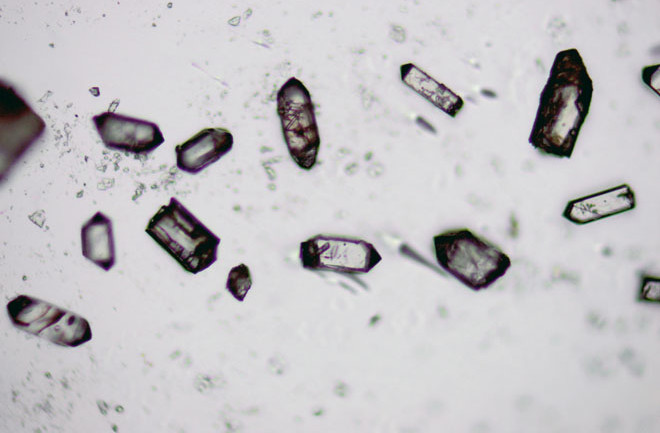 Zircon crystals from a rhyolite tuff within the Mineral King pendant, Sierra Nevada, California. Note the scale bar in the corner to get a sense of the size of the crystals. They will be analysed using a laser ablation mass spectrometer system to determine their age through uranium-lead isotopic ratios. Image: Erik Klemetti I'll be off at Michigan State University for the next few days running some U-Pb age analyses on these zircon (above) from the Mineral King area of the Sierra Nevada in California. The grains will likely be somewhere between 98 and 220 million years old (that's why we're dating them!) Zircon are pretty distinctive when you handpick them out of a crystal separate, with that districtive pyramid end (sometimes on both ends if the crystal isn't broken), flat sides (a euhedral shape -- meaning well-formed crystal) and dark edges (an optical property due to zircon's crystal structure). Each of these crystals stores a wealth of age and compositional information about the magma in which they formed and they are one of the more resilient minerals in most magma, so they can remain unaltered even if the rock in which they are hosted gets beat up, like many of the rocks trapped within the Sierra Nevada granite bodies are. Tiny little time capsules, all waiting to be extracted. So, no new posts until next week (sorry), but in the meanwhile, just enjoy how gorgeous these crystals can be.