You’re as cold as ice… but less dense 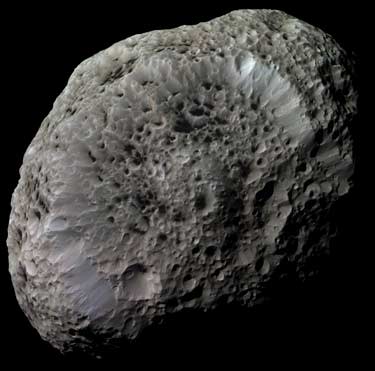 Yes, you want to click that picture. Hyperion is a moon of Saturn, and it's freaky. It's one of the largest irregular moons in the solar system at 300 km across, and the surface is simply weird. I speculated about it before, and it looks like some of my thoughts have panned out. When the Cassini spacecraft passed by Hyperion, the gravity from the tiny moon deflected the probe just a hair, and from that scientists have been able to find that the density of Hyperion is an astonishing 0.5 times that of water! For comparison, rock is about 2 - 3 times as dense as water, and even ice is 0.9 times water's density. I think this makes Hyperion the lowest density object yet found in the solar system. So why is it such a puffball? Probably it's suffered multiple low speed impacts with other bodies. This ruptured the moon, creating cracks and fissures all through it. If it got whacked by something of just the right size and speed, it could have actually broken apart and recoalesced; forming what astronomers call a "rubble pile". It would have so many holes in it that this would account for the extremely low density. Note-- I'm still speculating, but it's hard to imagine what else could have caused this moon to be so lightweight. It's covered in craters, too. The surface is so porous that when an impact occurs, it actually compresses the surface rather than blowing out material. The moon can absorb the impact better without disturbing the neighboring terrain (and any material ejected tends to escape the feeble gravity of the moon, so that it won't blanket nearby craters either). On normal moons, an impact is likely to erase several craters as the material is disturbed, but on Hyperion the impactor goes crunch, like punching a piece of Styrofoam. I wonder... when you walk on certain kinds of snow, you can feel it crunch as it compresses underfoot. Would an astronaut on Hyperion feel the same thing? I will note that I speculated that this was the case way back in that first post in 2005 (I missed the idea of ejecta leaving the moon, but I was dead on about the crunchiness of it). Maybe the Cassini crew should hire me. I'll ask Carolyn Porco, the imaging team leader (and fellow Boulderite) when I see her in August at Spacefest! OK, not really. But I may very well ask her about that weird black stuff at the bottoms of the craters; that is, if the paper which comes out tomorrow in the journal Nature doesn't mention it. When I learn more, I'll post about it.

Update (July 5, 2007): A second press release has come out, saying the black substance at the bottoms of the craters is made up of hydrocarbons.

"Of special interest is the presence on Hyperion of hydrocarbons--combinations of carbon and hydrogen atoms that are found in comets, meteorites, and the dust in our galaxy," said Dale Cruikshank, a planetary scientist at NASA's Ames Research Center, Moffett Field, Calif., and the paper's lead author. "These molecules, when embedded in ice and exposed to ultraviolet light, form new molecules of biological significance. This doesn't mean that we have found life, but it is a further indication that the basic chemistry needed for life is widespread in the universe."

That's not surprising; many outer moons contain hydrocarbons; these objects tend to be dark or reddish in color. This close-up look at how they behave will no doubt help astronomers and planetary geologists learn a lot more about the chemical nature of the outer solar system, too.