Your last chance to see Venus for the next few weeks

As I usually do when I go outside at twilight, I glanced over to the west to look for Venus... and it was much lower toward the horizon than I was expecting. I shouldn't have been surprised; in two weeks it's due for a close encounter with the Sun. On June 5/6, it'll pass directly between us and the Sun in an event called a transit. I'll have more info on that later, though you can read up about it at the Transit of Venus website. I set up my binoculars and even with such low power, Venus was an obvious crescent! I held my phone up to the eyepiece and took this shot: 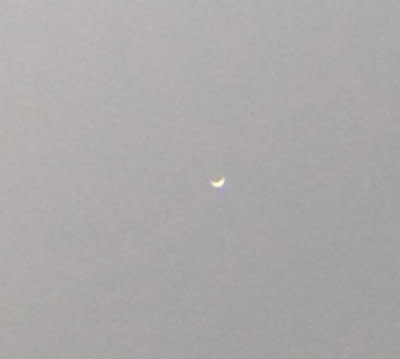 It's out of focus a bit, but you can see the phase. As Venus races past the Earth in its orbit, it gets a bit closer to us but presents a thinner crescent every day. It's moving so quickly now that you only really have a few more days to take a look before it's too close to the Sun to see comfortably. And then on June 5th it'll look a lot different!

The SciencesHow do Planets Form? NASA Wants Your Help Finding Out
Recommendations From Our Store