Your Citizen Science Idea Could Fly to Mars and Win You $20,000 from NASA! 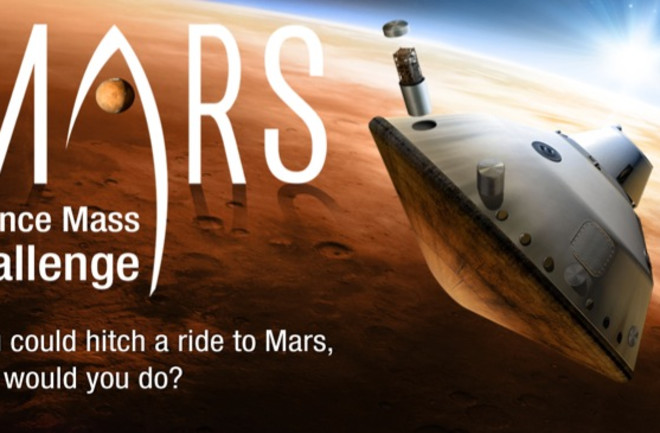 Rack your brains for a chance to win cash from NASA (Image Credit: NASA) Buckle up folks, ‘cause NASA is coming to you with a challenge. On Saturday, NASA announced at the World Maker Faire in New York that it has opened up registration for the ‘Mars Balance Mass Challenge’. The space agency has had a history of engaging citizen scientists through online crowdsourcing initiatives such as Target Asteroids!, Planet Mappers and Be a Martian and on the ground challenges such as its annual Sample Return Robot Challenge. In August this year, they partnered with ECAST (Expert and Citizen Assessment of Science and Technology) for the ‘Informing NASA’s Asteroid Initiative’ which invites the public to discuss and comment on how NASA is tackling asteroid exploration, potential asteroid threats and planetary defense. So what is the Mars Balance Mass challenge all about? The exploration of Mars is one of the agency’s major projects. Since its inception, the Mars Exploration Program (MEP) has conducted extensive studies in an effort to understand its climate, natural resources and importantly the possibility of life on Mars. In one such mission in 2012, NASA landed the robotic space probe Mars Science Laboratory (MSL) on the surface of Mars. To accurately land at a predetermined site the probe used a precision guided system which included two ejectable ‘balance masses’ made of tungsten weighing 150 kg (approximately 330 lb) each. The first balance mass comprising of two 165-pound weights was ejected before entering the atmosphere of Mars to offset the spacecraft’s center of gravity during entry. The second balance mass, made up of six 55-pound weights was expelled after atmospheric entry and rebalanced the center of gravity of the craft just before the parachute was deployed ^1,2. (You can even see images of the impact craters created by these balance weights on the surface of Mars. Pretty cool huh?)

Positioning of the ejectable tungsten balance weights on the MSL. Two blue lines represen the 150 lb balance masses ejected before entry and six 55 lb masses ejected after entry are represented by the blue circles. (Image Credit: NASA^2) So how does this relate to the challenge? In the 2012 mission, these balance masses were simply tungsten dead weights. For the challenge, the question that NASA wants your help to answer is “If you had up to 150 kg of ejectable mass prior to entry and another 150 kg during the entry and landing phase of a Mars mission, what could you do with it that was useful and advances knowledge in a scientific or technological way?” In other words, by replacing the balance masses in future missions with a useful payload, NASA is hoping to kill two birds with one stone. Perform the function of the balance masses and acquire additional knowledge. Partnering with Innocentive Inc., NASA is offering a prize of $20,000 to the winning proposal. According to their website, this is a "Theoretical Challenge" which means that citizen scientists need only to submit a written proposal, though “ideas, drawings, and detailed procedures are required.” In an official press release by NASA, Lisa May, lead program executive for NASA’s Mars exploration program said, “We want people to get involved in our journey to Mars. This challenge is a creative way to bring innovative ideas into our planning process, and perhaps help NASA find another way to pack more science and technology into a mission.” The challenge already has garnered significant interest with 215 226 active participants and counting (at the time of writing) within only two days since it was opened to the public. Participation can be on an individual basis or a team effort. For teams, Innocentive offers online workspaces known as Team Project Rooms to collaborate efficiently and document the process.

The Mars Balance Challenge is part of the launch of a larger initiative known as NASA Solve, an online platform which lists all the opportunities available to the general public. These challenges are ones that NASA needs the help of citizen scientists in solving. “NASA is committed to engaging the public, and specifically the maker community through innovative activities like the Mars Balance Mass Challenge, and NASA Solve is a great way for members of the public, makers and other citizen scientists to see all NASA challenges and prizes in one location,” said NASA Chief Technologist David Miller in the press release. Ideas for the Mars Balance Mass Challenge are not limited to any specific discipline so the (Mars) sky is the limit. Fire up your imaginations, hone your google search skills and start cracking! Sources

*** Interested in citizen science projects from NASA? Search for them using the project finder on SciStarter!