Shadows are created when a source of light is blocked. Obvious, right? Also obvious is the brighter the source, the easier it is to see the shadow cast. So you might wonder, how faint an object can you use as a light source and still be able to detect a shadow? We know the Sun and Moon cast shadows, and Venus is well-known for this as well. The entire sky is bright enough, even at night, to throw shadows under the right conditions. But what about the next brightest light source in the night sky: Jupiter? There have been claims for decades (I found one from 1905!) but I've never seen any proof. Canadian "amateur" astronomer Laurent V. Joli-Coeur wondered about this as well. So he set about dreaming up a way to do it: build a rig that would allow him to set up a "Jupiterdial" -- like a sundial, with a gnomon (a post) that would cast a shadow, but which he could aim at Jupiter -- and take a time exposure on his camera. So with some help, he built it... and it worked! Here's the result:

The hammer-shaped shadow is from his gnomon, and the light source is from Jupiter. To make sure, he rotated the rig a bit, and the shadow moved as well, indicating it was from a point source. Also, he pointed his rig well away from Jupiter and got no shadow when he took a third picture, showing it wasn't from the glow of the night sky, either. All in all, a very well-done, proper scientific inquiry. Oh -- did I mention that Laurent was 14 years old when he started this project? 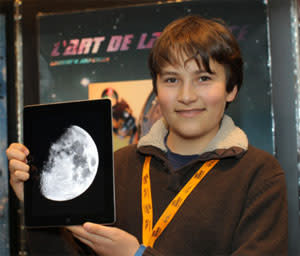 Amazing. When I was 14 I was deeply into astronomy and had my own 'scope, but I was nowhere near this sort of thing. Sure, tech is a lot better now and all that, but clearly Laurent is very clever, and has a bright (haha) future ahead of him. He's taken some very nice pictures, too, including one of the crescent Moon I like quite a bit. If you watch the news it's pretty easy to despair for our future. But it's really important to remember that there are smart kids out there who will grow up into smart adults. The future is in their hands, too. A kid today such as Laurent who shows such curiosity and the desire to explore boundaries will make a fine inhabitant of that future.

Tip o' the dew shield to Russel Bateman on Twitter

The SciencesWatch Out: Objects in the Universe are Bigger than They Appear
Recommendations From Our Store