Yes, Rockets CAN Fly in a Vacuum 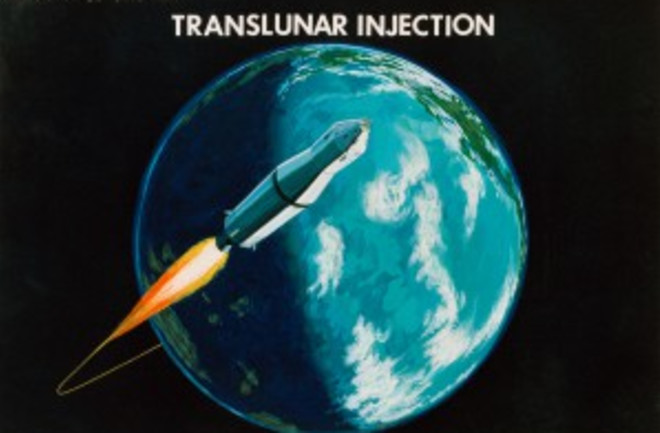 Artist concept of the S-IVB firing to send the crew to the Moon, aka the translunar injection burn. It fired in a vacuum. For real. NASA. “Rockets can’t fly in space! There’s no air for the engine to burn in space! And there’s no air for the rocket to push against in space! WE’VE NEVER LEFT EARTH!” So goes the cry of people who don’t believe we landed on the Moon — at least, this is one of their claims. But it’s wrong. In spite of what they think, rockets can and do fly in a vacuum. Fuel and oxidizer mix and ignite in a combustion chamber causing a controlled explosion that is directed out through the engine bell. This forceful expulsion of hot gas is thrust, and when that thrust is powerful enough to overcome the mass of the rocket, it lifts (ideally) smoothly off the ground. So where does this misconception come from? Most likely, from cars. [embed]https://www.youtube.com/watch?v=qWj7wBHB_rE[/embed] Most of us interact with a car engine in our daily lives, so that’s the familiar benchmark. A car engine isn’t the same as a rocket engine (if they were identical our morning commutes would be much faster!) but the general principle is the same: fuel and an oxidizer mix, compress, and ignite with a spark. In this case, we have gasoline, oxygen taken from the air, and a spark in the engine’s mechanics. With our car, that forceful expulsion of hot gas is exhaust that comes out through the tailpipe. Like exhaust on a rocket, exhaust from your car does produce thrust, just not enough to overcome the mass of the car or the friction of the tires against the road. Instead, it’s that friction of the tires that make the car move. The engines drives the wheels to turn, and as they do they “push” the road back. The road, in turn, pushes the car forward. It’s the same equal and opposite reaction! So using cars as the starting point, we see where the idea of rockets pushing off the Earth or air comes from, but the two vehicles aren’t the same. A car uses friction to gain movement via Newton’s third law and a rocket harnesses the raw power of thrust from a much bigger engine… or engines usually. But there’s another problem. Engines, we’ve just said, need air to burn, and there’s no air in space… true. But that doesn’t mean rockets magically don’t need oxygen. They just have to take it with them! On board any rocket (a chemical rocket, that is) is a fuel tank, an oxidizer tank, and something to spark an explosive reaction in the combustion chamber. Or in the case of a rocket burning hypergols the propellant and oxidizer ignite on contact. Other kids of propulsion harness the same law of physics through slightly different means. Take ion propulsion for example. An ion engine ionizes propellant by adding or removing electrons to produce ions. Ion engines typically use the gas xenon. The gas is ionized, which sends a steady stream of positively charged ions out the back of the engine. It’s not a lot, but it’s enough thrust to move the spacecraft through space — remember we don’t have air resistance or anything when we’re off the Earth. So, yes, a rocket still works in space all thanks to Newton’s third law of motion!