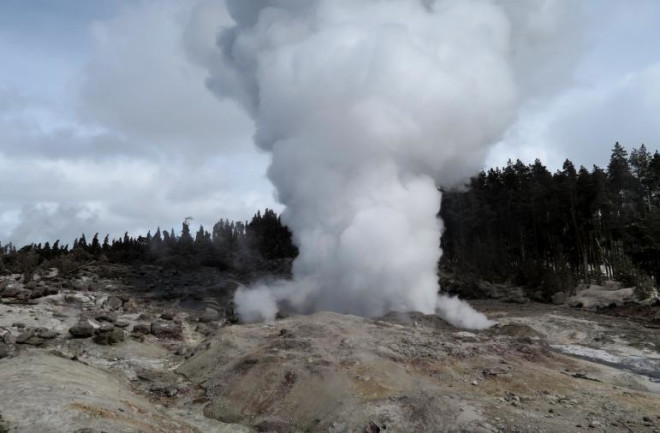 Steamboat Geyser erupting in March 2018. USGS/YVO. Over the weekend, USGS Volcanoes tweeted this:

If you're unfamiliar with Steamboat Geyser

at the Yellowstone Caldera, it is one of the largest geysers in the park. Geysers are places where superheated water from below the surface builds up pressure until it shoots out of the ground ... and then the process starts all over again. Some geysers are very regular in their eruptions, such as the famed Old Faithful

. However, some can be irregular in the time between eruptions and some may completely stop for long periods. Steamboat Geyser falls into this last category. The geyser had not erupted since 2014

, but so far this spring, the geyser has blasted hot water and steam into the air seven times

! The last time the geyser produced even three eruptions this close together was 2003, so geoscientists who watch the geyser are surprised by how often it has erupted

. The eruptions have been relatively tame by Steamboat Geyser standards, but it seems like something has changed under the geyser to cause more frequent eruptions. When Steamboat Geyser has a major eruption, it can shoot water and steam upwards of 90 meters (300 feet) over the landscape at volumes that are 10 times that of Old Faithful. However, Steamboat Geyser hasn't always been the Earth's the largest geyser. After the 1886 eruption of Tarawera

in New Zealand, where a series of craters formed that became the Waimangu Volcanic Valley, another geyser and hot spring basin. One feature that formed was the Waimangu Geyser

that would blow material 1500 meters (almost 5,000 feet) into the air! The geyser only erupted from 1900 to 1904 and did kill four observers in 1903. Of course, with Steamboat Geyser's location in Yellowstone, this sort of news of a surprisingly active geyser makes certain people get overexcited/nervous that maybe the giant volcano might be waking up. However, this is not the case for Steamboat Geyser's current activity. The last year that the geyser had multiple eruptions, the Norris Geyser Basin

where Steamboat resides, had seen an increase in the subsurface temperatures. Everything went back to normal, but possibly we're seeing another thermal change. However, there haven't been any other signs of new heat (like new hot springs) noticed so far, so it is not clear if anything like thermal changes are happening. It could also be something specific to Steamboat Geyser. Hydrothermal systems like that found at Yellowstone

are notorious for seemingly random changes that are caused by the movement of water underneath your feet. Possibly shifting faults or more water could cause the geysers (or hot springs or whatever) to become more active for a time. None of this suggests that Yellowstone is heading for an eruption. The current eruption at Kīlauea

is a great example of what we would expect before an eruption: lots of earthquakes, more release of volcanic gases, inflation of the ground surface, possibly cracks forming. The current status of the caldera set by the Yellowstone Volcano Observatory

, so nothing seems to be out of the ordinary at Yellowstone right now beyond a single geyser having a heck of a spring.