Yellowstone Volcano Observatory Gets an Upgrade 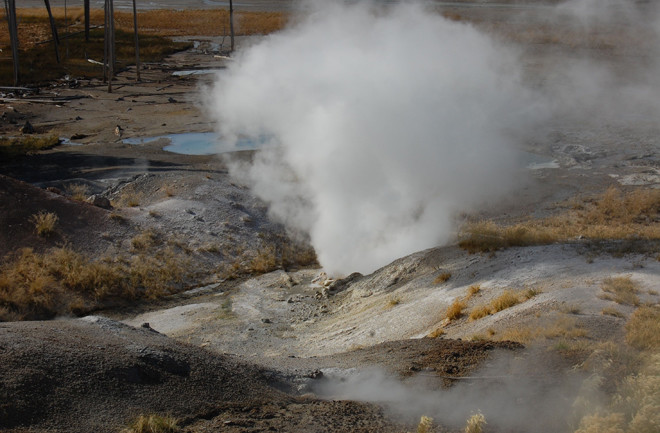 Earlier this year, I was reported on the newest of the USGS Volcano Observatories, the California Volcano Observatory. It was the first of the Volcano Observatories to debut the revamped website design for the USGS and now the Yellowstone Volcano Observatory joins CalVO with the new design. I know many of you already frequent YVO, but if you don't, it contains every bit of information you could need to follow the largest active caldera in North America. YVO is full of many realtime monitoring data, such as webicorders all over the caldera, webcams, ground deformation and water temperatures at some of the hot springs in Yellowstone. Now, all this data is constantly assessed by USGS geologists assigned to the caldera, so there isn't much in the way of changes in activity that doesn't get attention. The caldera is an active place, with several seismic swarms each year and nearly constant ground deformation (both rising and falling) of the caldera floor. This is perfectly normal for a "restless caldera" like Yellowstone. This is not to say that these changes aren't closely watched when they occur - we've never experienced an eruption at Yellowstone in human history, so we can only use our knowledge from other volcanoes to look for signs of an impending eruption. However, even if Yellowstone were to see a sharp rise in activity, the likelihood is that an eruption would be small. The most recent activity at Yellowstone are small rhyolite domes that formed in the caldera itself, so whenever people talk about the "eruptions" of Yellowstone, they likely mean the "big 3" - Huckleberry Ridge, Mesa Falls and Lava Creek Tuffs. However, the giant caldera-forming eruptions are few and very far between, so worrying about such an cataclysmic event is a little outlandish (like worrying about an asteroid hitting your house). I know I can sound like a broken record, but more type is burned (including my own) about Yellowstone when it represents a much smaller volcanic threat that volcanoes like Mt. Rainier or Mt. Shasta. That being said, Yellowstone is still a very exciting place. It is one of the only active continental hotspots on Earth - and by far the most active. It was one of the most vigorous geothermal areas in North America and as I mentioned before, the Yellowstone hotspot produced three of the largest explosive eruptions in the Cenozoic. For all these reasons and more, Yellowstone is definitely an exciting place, even without the fearmongering that comes in most media coverage.