Yellowstone: The Anatomy of a Supposed Volcanic Conspiracy 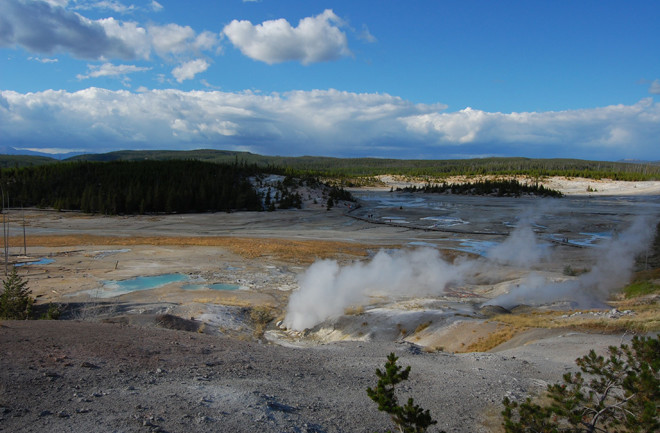 As many of my regular readers know, I have a bit of a bee in my bonnet over the media's (and public's) obsession with the Yellowstone Caldera. Now, I truly appreciate what a geologically unique and powerful location Yellowstone is today -- it is one of the few active giant caldera systems on the planet and it is located in the middle of one of the more populous (and powerful) countries on Earth. The caldera has the ability to produce a society-changing event where much of a continent could be rendered uninhabitable for years if not decades. However, all that being said, sometimes you need to just step back and take a deep breath with it comes to a "restless caldera" like Yellowstone. Watching the caldera's many webicorders and webcams on a daily basis might be a fun hobby, but when you start to take it so seriously that you no longer believe the scientific and technical truth behind the real-time data but instead become convinced that you and only you understand what is going on, well, that is when we cross the rickety bridge from interest to paranoid obsession.

I recently had a Twitter exchange with someone who will remain nameless who believed that "something was up" at Yellowstone based on some odd webicorder behavior at a few of the stations. After being told, I checked out the stations (Mary Lake and Pelican Cone) and thought that they looked like wind-related noise and telemetry/technical problems (respectively). To be sure, I shot an e-mail to folks I know at the Yellowstone Volcano Observatory and they agreed that it looked like wind (it had been stormy for the past few days across the Yellowstone area) -- and that the Pelican Cone webicorder was down, so all the data from that station for at least the past few days is just noise. For many of you who follow webicorder traces that record subtle seismicity, this should all sound familiar -- they can be very sensitive to wind, weather, trucks, buffalo and more. The problem with wind can be quite acute at times, especially depending on the specific location of the seismic station. The station are also apt to break down, especially in the bleak of midwinter in the middle of the National Park (with limited staff), and getting to these stations to fix them when the low is -27F is not likely to occur quickly. Even if these webicorders might be recording some seismicity, earthquakes are common at Yellowstone so without other types of corroborating evidence (increased carbon dioxide, sulfur dioxide emissions, increased heat flow, changes in geyser/fumorale behavior, a very sharp increase in inflation across the caldera centered near the highest seismicity), to jump to any conclusion about potential activity at Yellowstone is foolhardy. Yet this Twitter user would not believe a word of it -- no, I was "making up excuses" and "full of crap". So, why is it so hard to believe that these reasons are the source of the "anomalous signals" at Yellowstone when the preponderance of facts would suggest that there are perfectly normal and expected reasons for the webicorders to show these signals? That is where we get into the human mind's ability to convince itself of conspiracy. However, you have to ask yourself a number of questions before you start shouting that Yellowstone is about to go: What advantage does anyone (YVO, USGS, me) have in covering up rumbling at Yellowstone? I, for one, can't think of a good reason to cover it up because if Yellowstone were to erupt, it would likely be an eruption that would only affect a small region near the eruption itself -- maybe a Saint Helens-scale eruption in the caldera. If it were to go "nonlinear," then there would be little we could do about such an eruption anyway, so why pretend like it isn't going to happen? If your distrust for government is so high to think that anything they say is a lie, then you have more problems than just supposed rumbling at Yellowstone ... and once you start acting like everyone else is wrong by berating the facts/people, well, then you're toast. I know, it is easy to believe the conspiracy because it seems "exciting," but the reality of science is more exciting because it is what is really happening.