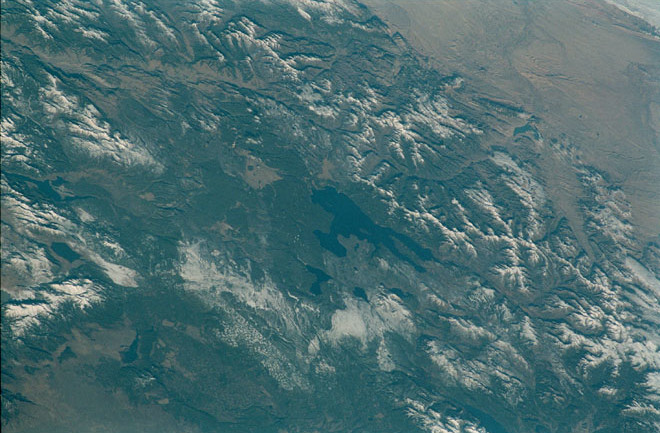 The Yellowstone Caldera (the lowlands in the middle) with Yellowstone lake, taken from STS-92 in October 2000. Image: NASA. As usual, people are trying to rabble rouse when it comes to the Yellowstone Caldera. All these rumors that the government is trying to hide evidence of an impending eruption are pure fantasy, but that doesn't stop some people from acting out their delusions to the detriment of others who fall prey to this misinformation. Yes, the Yellowstone Caldera is a massive volcano that has the potential to produce huge eruptions, but no, there are no indications right now that any sort of eruption will happen any time soon -- and I'd be surprised if we see an eruption in our lifetime (just like any volcano that hasn't had a confirmed eruption in the last ~70,000 years). However, we're always learning more about the caldera and its underpinnings. A new study by Jamie Farrell and others in the Geophysical Research Letters examined the geometry and properties of the Yellowstone magma reservoir using seismic data from earthquakes registered on the Yellowstone Seismic Network between 1984-2011. These seismic waves travel at different speeds depending on the material that they are passing through, so small changes in the arrival of seismic waves at different seismometers can be used to deduce the composition of said material. This means that examining seismic waves from tens of thousands of earthquakes can produce an image of the interior of the Earth -- a process called tomography. Farrell and others (2014) took this massive collection of seismic data and applied models to determine what the likely composition of the material beneath the caldera is. They did this by examining anomalies in the speed of seismic waves, where low velocity zones correlate with areas that could harbor magma, hydrothermal fluids, gas or other fluids. They can then render a models of the areas (see below) that have low velocity ... and then interpret whether they think that is the magmatic reservoir or hydrothermal areas (or neither).

Seismic profiles underneath Yellowstone, where red are zones of lower velocity. These zones are magma/mush or hydrothermal features (heated fluids). Image: Farrell and others (2014) Based on these data, Farrell and others (2014) have modeled a large, shallow zones of lower seismic velocity that they interpret as the magmatic system beneath the Yellowstone Caldera (see above). This isn't surprising as it has been imaged before. However, these new data also reveal a zone extending from the northeast boundary of the caldera that they interpret as a zone of shallow magma or hydrothermal fluids (or both). So, the magma body at Yellowstone might extend outside the known boundary of the caldera. Now, before people get all uppity about that, this is what you might expect if you consider how much North America has moved since the last large eruption (~640,000 years ago). The Yellowstone hotspot is stationary and North America is moving across it, burning a path known as a hotspot track. As time goes by, the focus of magmatism at Yellowstone should be moving to the northwest. Overall, Farrell and others (2014) think that the total volume of the Yellowstone magmatic system is ~200-600 cubic kilometers of melt (the range reflects the uncertainties in their models), which is much more melt than previous estimates. That sounds like a lot ... and it is. This volume is smaller that two of the three largest Yellowstone eruptions, but within range of the 1.3 million-year-old Mesa Falls Tuff that erupted ~280 cubic kilometers of rhyolite ash and volcanic debris. However, there is a big catch. Farrell and others (2014) estimate that this melt is stored in a mush that is only 5-15% molten -- that is to say, 85-95% of the reservoir is solid. This makes all that magma extremely difficult to mobilize to eruption, as mushes will likely behave like a solid until ~40% melt. This new estimate is also much lower than the previous estimate that was ~32% melt. This means that Yellowstone is far below the bar for an eruption based on new models of buoyancy-driven eruptions. So, the Yellowstone Caldera magmatic system might be larger than we previously thought, but much of that magma looks to be locked into a mush that is much less molten ... and means its harder to erupt. As the scientists at the Yellowstone Volcano Observatory said after this study was publicized at the American Geophysical Union meeting last December: "The new findings do not imply increased geologic hazards at Yellowstone, and certainly do not increase the chances of a "supereruption" in the near future". All is well-and-good at the world's largest caldera system, so don't buy into those "sky is falling" Chicken Little's out there who like to get their kicks from every blip at Yellowstone. . The caldera is being watched, but right now, it is just business as usual.