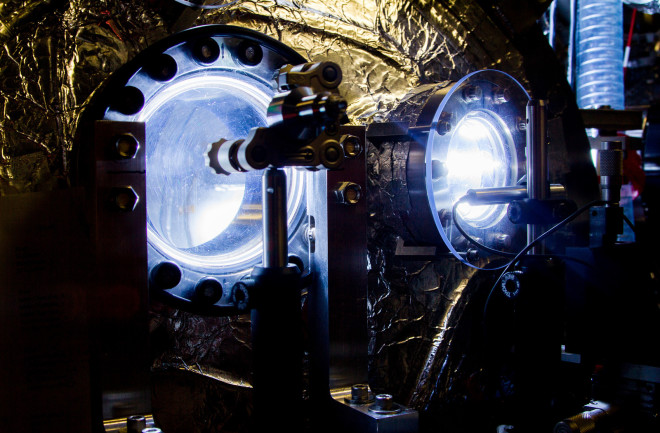 The LCLS Coherent X-ray Imaging Experimental Station. (Credit: Nathan Taylor/SLAC) When researchers want to take pictures of very small things, like individual molecules, they have to get creative. When scales shrink to seemingly imperceivable levels, images must be captured using indirect techniques that record how the subject being photographed interacts with its environment. One way to do this is by observing how a beam of particles disperses around the object. Working backward, researchers can then infer what the object in question looks like.

The particle beams that do the heavy lifting for this kind of imaging require sophisticated equipment to create. At the SLAC National Accelerator Laboratory at Stanford University, their linear accelerator stretches out for two miles, focusing beams of charged electrons onto minuscule targets at extremely intense energies. In a paper published Tuesday in Nature, SLAC researchers observed peculiar behavior among atoms subjected to their X-ray beam, and they're calling it a "molecular black hole." The Linac Coherent Light Source (LCLS) at SLAC is used to take pictures of organic molecules and biological processes that take place at scales of only a few atoms. A beam of electrons bounces off the molecules in a predictable way, giving researchers an idea of their structure. This happens in the brief instant before the sample is destroyed by the electron beam's intense energy, something the researchers call "diffraction before destruction." Understanding how the molecules behave as the beam passes through is critical to obtaining precise measurements.

From The Inside Out

Working with atoms of xenon and molecules containing iodine atoms, the researchers saw something unexpected occur. The beam ripped through the outer shells of the atoms and stripped away the innermost electrons, leaving a gaping void between the nucleus and the outer electrons. The overwhelmingly positive charge this created then sucked in all of the surrounding electrons with enough strength to not only gather its own electrons, but also steal them away from surrounding atoms. As predicted by the laws of physics, this kind of electron theft doesn't happen in nature because the forces involved are too great. Done fast enough, and with enough power, however, the naked nuclei overwhelm the grip of neighboring atoms and siphon off electrons, in a process, the researchers say, that is similar to a black hole consuming a star. “When we have really, really intense X–rays like we do there’s enough X–rays that you knock out one electron and before there’s time for recombination you knock off another and then knock off another and so on and so forth,” says LCLS staff scientist and study co-author Sebastien Boutet. “What that ends up doing is stripping most of the inner shells and then that very highly charged molecule unexpectedly sucked in a bunch of electrons from neighboring atoms as a consequence." The molecular version doesn't work the same way as a cosmic black hole, which relies on immense gravitational forces to suck in matter, but the observed effect is similar. Understanding how the beam interacts with atoms of this size, which often show up in their experiments, will help researchers fine-tune their images. The accelerator is currently undergoing an upgrade which will allow for a drastic increase in the number of beam pulses per second, expanding the machine's imaging capacity. The more precision researchers can achieve while working at scales of just a few hundred nanometers, the more they will see.