I spend a lot of time in my upcoming book Death from the Skies! making the case that for the most part, astronomical dangers to life on Earth — especially from explosions called gamma-ray bursts — are incredibly rare, and not worth fretting over too much.

Note: Let me be clear up front, since folks tend to worry about these things: I’m going to talk about some frightening things in this post, but my personal opinion as someone who has actually studied this stuff is that we are in no real danger. The object I’ll be describing is pretty interesting, but there are way too many uncertainties about it to cause any panic for now. So remain calm, keep your arms and legs inside the blog entry at all times, and enjoy. If you want more reassurance, just skip to my conclusion below. 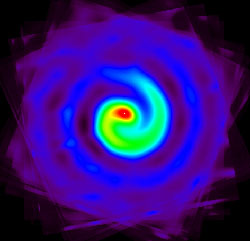 Up until now, I hadn’t heard of WR 104. This is a binary star located 8000 light years away, more or less toward the center of our galaxy. The two stars are both whoppers; one is a massive O star, which will someday detonate in a tremendous supernova. However, at that great distance, it won’t do anything more than be a bright light in the sky.

The other star in the system is a bit of a worry, though. It’s what’s called a Wolf Rayet star, a massive, luminous star that is on the brink of exploding as well. In general, these also blow up as supernovae and, from 8000 light years away (80 quadrillion kilometers) it wouldn’t pose much of a threat.

But what if it explodes as a gamma-ray burst?

GRBs are a special type of supernova. When a very massive star explodes, the inner core collapses, forming a black hole, while the outer layers explode outwards. Due to a complex and fierce collusion of forces in the core, two beams of raw fury can erupt out of the star, mind-numbing in their power. Composed mostly of high-energy gamma rays, they can carry more energy in them than the Sun will put out in its entire lifetime. They are so energetic we can see them clear across the Universe, and having one too close would be bad.

Enter WR 104. The brighter of the two stars might, just maybe kinda possibly, be ready to go GRB on us. It’s not at all clear if it can, and there is reason to believe it can’t (young stars like this one tend to have characteristics that make it very hard for them to form an actual GRB). Also, even if it does blow up that way, the beams are a double-edged sword; yes, they pack an unbelievable punch, but they’re narrow. A GRB would have to be aimed precisely at us to damage us, and the odds of that are pretty low.

Except that for WR 104, it’s possible the star does have us in its sights.

The only way to know which direction a potential GRB’s beams will blast out is to look for some signs in the system of symmetry; a disk of gas, for example, would orbit the star’s equator, so the poles of that disk would be the direction the beams would follow. WR 104 does have a feature that allows us to determine its orientation — a vast spiral of material being ejected from the system.

The picture above was taken using the Keck infrared telescope in Hawaii. It shows the material being ejected. Both stars have strong winds of material they blow, like super-solar winds. These winds collide, and flow outward from the binary. The streaming gas forms a spiral pattern in the same way a rotating lawn sprinkler shoots out water. The gas doesn’t actually move along the spiral arms; that’s a bit of an illusion caused by the rotation of the system (comets sometimes show this same pattern).

University of Sydney astronomer Peter Tuthill, who has been studying WR 104 since it was discovered in 2000, has also created a dramatic movie showing the spiral pattern generated as the two stars orbit each other. The animation shown here is an older one — a newer one that is much cooler is available, but at 400kb I’ll simply link to it — but it gives you an idea of what’s going on. The thing to note is that we really are looking at this spiral almost face-on, more-or-less down the pole of the system (it appears to be tilted by about 12 degrees from face-on, but it’s difficult to measure, and could be tilted by anything from 0 – 16 degrees — Tuthill’s technical paper has details). It’s hard to say exactly, but it’s close enough to make me wonder.

One thing is that it would be incredibly bright. How bright is actually hard to say; GRBs are notoriously variable in brightness, and there may be quite a bit of dust between us and the system that would absorb a lot of the visible light. The major concerns from a GRB at this distance are two-fold: the impact of the high energy radiation, and the impact of subatomic particles called cosmic rays.

Models of a GRB exploding at roughly the same distance indicate that the immediate impacts are damage to the ozone layer, and the creation of nitrogen dioxide, which is basically smog. Gamma rays emitted by the burst would hit ozone molecules and shatter them, and models indicate that a GRB at this distance could deplete the ozone layer by 30% globally, with local pockets depleted by 50%. It would take years for the ozone to recover from that. Note that the ozone holes we have been dealing with the past few years are actually depletions of less than 5%. Obviously, this is a big deal.

Also, the gamma rays would break apart molecules of nitrogen in our air, which would reform as nitrogen dioxide, a reddish-brown gas that is essentially smog. This could potentially block sunlight, cooling the Earth. That may sound nice, given the reality of global warming, but in fact we’d rather not have something like this happen when we don’t understand all the implications. Plus, nitrogen dioxide is water soluble, and would precipitate down as acid rain.

So all that would be bad.

Worse, the flood of subatomic particles from such a GRB may in fact be more dangerous. These cosmic rays hit the air and create fast particles called muons, which would rain down over the Earth. How bad is that? Actually, it’s pretty uncertain; the number of variables involved is large, and the modeling of this is notoriously difficult. It’s not even clear that the cosmic rays from a GRB at this distance would even reach us, and if they did, what exactly would happen. The worst-case scenario is pretty bad — large scale mass extinctions — but I am not sure anyone really believes those models. The best case scenario is that they never reach us at all, so the range is a bit wide. There’s just too much we don’t know. Another issue is that the distance to WR 104 is uncertain. It may be 8000 light years, but other astronomers think it may be as close as 5000 light years. That does make a difference, since the damage it can inflict is sensitive to distance. Farther away is better! Tuthill’s team thinks 8000 light years is a better estimate, so that’s good. Finally, we don’t know when such a star will explode. It could be tonight, or it may be thousands of years from now. So it’s not worth losing sleep over this! To wrap up: WR 104 is an interesting system. Both stars are guaranteed to explode one day. If they are just regular old supernovae, then we are in no danger at all, because they are way way too far away to hurt us (a regular supernova has to be about 25 light years or closer to hurt us, and WR 104 is 300 times farther away than that). It is possible that one of the stars may explode as a GRB, and it’s possible it’s aimed at us, but we don’t know. And we don’t know exactly what effects it would have on us. So if it’s less than 10,000 years from exploding and if it blows up as a GRB and if it’s aimed at us and if there isn’t much junk between us and it, then yeah, we may have a problem. But that’s an awful lot of ifs. Given all these uncertainties, and having researched the dangers of GRBs extensively for my book, I won’t be losing any sleep over WR 104. For now, this is just an extraordinarily cool object, and it’s worth keeping an eye on — certainly for its astronomical interest alone! But as for it being a Death Star, I think it’s way way too early to tell.