Would You Move Back Into a Town Destroyed by a Volcano? 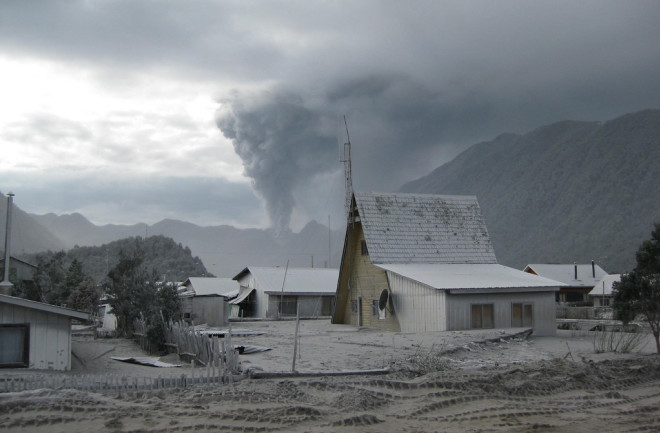 Building buried in ash from the 2008 Chaitén eruption, with the volcano in the background. Taken July 2008, Wikimedia Commons. It has been nearly 11 years since the surprise eruption of Chaitén in Chile, one of the largest explosive eruptions in the 21st century. The volcano remained active for a full 3 years and the volcanic ash and debris would be washed down the river valleys during heavy rains. In the end, parts of the town of Chaitén would need to be abandoned due to the influx of debris from the eruption. Yet, only a decade later, the areas that were abandoned during the eruption are being rebuilt -- a decision that shows the tension between human memory and geologic realities. The 2008 eruption of Chaitén started out big. The initial salvo from the volcano reached over 10-19 kilometers (35,000 to 55,000 feet) into the air and for most people (including volcanologists), it was the first they had heard of the Chilean volcano. At the time, it was thought that Chaitén hadn't erupted in thousands of years. More recent work done since the 2008 eruption found that the volcano last erupted in ~1640 AD, which goes to show how quickly a volcano can appear to have been quiet for a lot longer than it really has. That eruption in 1640 was about as large as the 2008 eruption -- a VEI 4. Looking even further back, Chaitén produced VEI 5 eruptions (so, 10 times larger) ~5,100 and 8,800 years ago. This was a volcano with a nasty history.

Before (left) and after (right) Landsat images of Chaitén. The after image shows the delta of volcanic debris in the bay and the large dome that filled the caldera during the 2008-11 eruptions. USGS. Over the course of the three years of activity at Chaitén, a massive rhyolite lava dome formed in the caldera created by previous eruptions. If you look at the before and after Landsat images (above), you can clearly tell that a prior dome had formed, likely in the 1640 eruption. However, the 2008-11 activity has filled that crater even more with debris. Images taken by the Aqua satellite show the ash that was deposited all over the region from the eruption. This material can linger in the rivers and streams for decades or longer, only to be remobilized during floods. As the eruption continued, all that volcanic debris came rushing down the Rio Chaitén into the town of the same name. In late May 2008, a few weeks after the eruption began, a volcanic mudflow (lahar) flooded the entire town. A glance at the differences between a 2001 and 2016 satellite image of the town show how much change (above). A large fan of debris extends out into the bay and the river itself taken a different route -- instead of around the town, it goes right through it. Even the river channel shows that it is still full of the grey volcanic debris that washes down from the volcano -- and that material can be moved years after the eruption merely due to heavy rains and flooding.

Before (left) and after (right) images of the town of Chaitén. The new path of the Rio Chaitén along with the large fan of debris are clearly seen. Rebuilding Chaitén With the renewed activity at Chaitén, the decision was made to evacuate the entire town of a few thousand. At first, the government was planning to rebuild Chaitén in an entirely new location, further from the volcano and ideally, out of harms way from future eruptions of this scale. However, that plan seems to have been abandoned and instead, after a study of the potential for habitation, the town is being rebuilt exactly where it stood before. In fact, construction is happening directly on the debris from the 2008 (and prior) eruptions (below) without much of a real plan to protect the town from future eruptions. The government is spending millions of dollars to build a new port facility for the town now that the debris has build out into the bay so much further.

To a volcanologist, this is confounding. We have a volcano that has a record of repeated explosive eruptions that wiped out part of a town only 11 years ago, yet officials are already planning to rebuild in place. Don't get me wrong, this has happened before. The ruins of Pompeii

and Herculaneum are underneath modern cities in Italy like Naples because over the centuries people forgot about the towns buried by Vesuvius. Homes destroyed during the 2018 eruption of Kīlauea

in Hawaii were built on lava flows that were erupted as recently as 50 years ago. Why do we do such things? Why do people move back? Part of the problem is the wide divide between human perception of time and geologic time. "Sure, the volcano hasn't erupted in decades. That must mean we're safe?" For humans, 50 years can be a lion's share of a lifetime but for a volcano that might be active for hundreds of thousands of years, 50 years is nothing. Can we think to prepare for events that might occur 100 years down the road when today, things are quiet? The other part of the problem is that people are linked to place. Very rarely do you see people displaced by a disaster and not try to return after their perception of the hazard has passed. We see this in places other than volcanoes: we rebuild from earthquakes, hurricanes, floods, tornadoes without much thought to how likely a recurrence of that disaster might be. Even in slower disasters, like sea-level rise, we choose to try to protect what exists rather than move to an entirely new location -- humans become attached to where they live. The last is money. The people who want Chaitén to remain in place

are the people who had invested the most in the town -- business owners, land owners. Moving the town would be a massive loss to them, even with government assistance. The threat of more volcanic activity is outweighed by the economic loss, at least in the short-term. So, are Chilean officials doing a disservice to the people of Chaitén by allowing them to rebuild in the same place? More importantly, are they putting them directly in harm's way? This is where it gets very difficult. A volcanologist looks at this and says clearly "yes"

. Chaitén is still a potentially active volcano and the town lies in the path of debris that would come from almost any future eruption. However, volcanologists can't guarantee when that next eruption might be. Maybe Chaitén doesn't erupt for another few hundred or thousand years. Does that mean that the town of Chaitén needs to be permanently abandoned if it takes 8 generations before the next eruption? Where do we draw the line with risk? Even if it is only 100 years, this is beyond the lifespan of pretty much everyone currently living in the town. Managing risk is challenging. How long do you pay for people to live in places with high geologic risk, like the North Carolina barrier islands or southern California or Indonesia? We live on a very geologically active planet, so finding places to live devoid of hazard is nearly impossible. However, is rebuilding on volcanic deposits a decade old really the best decision? Chaitén becomes a bit of an experiment now, where the reconstructed town will need to weather what the volcano might throw at it. Hopefully the cost is in dollars and not lives.