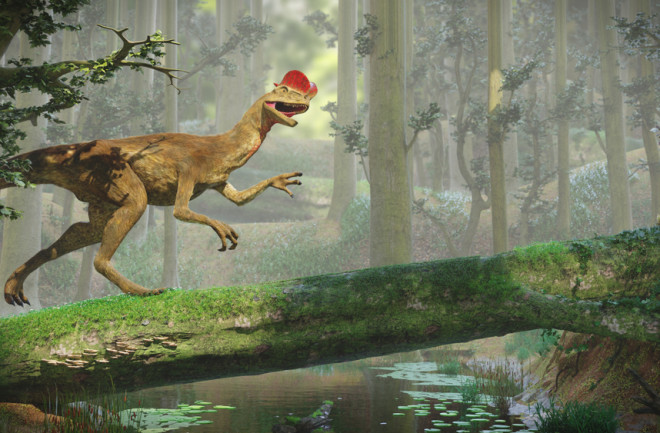 If you were just going by the 1993 blockbuster Jurassic Park, you might think that the dinosaur Dilophosaurus was pretty spry. In a now-infamous — and scientifically dubious — scene, the Early Jurassic predator dodges behind a tree while playfully evading one of the film’s villains. Moments later, it darts up a stream of cascading water before unfurling its vibrant neck frill and spitting venom in the man’s face.

Paleontologists know that Dilophosaurus didn’t have colorful neck frills, nor did they spew black goo to subdue their prey. And while the double-crested creature is depicted as roughly human-sized on screen, it actually weighed a whopping 900 pounds and spanned more than 20 feet in length some 190 million years ago. Still, the filmmakers may have been onto something regarding the therapod’s agility; thanks to its powerful legs, it could reach speeds up to 20 mph.

But was the Dilophosaurus fast enough to beat eight-time Olympic gold medalist Usain Bolt in a 100-meter dash?

It may sound like a strange hypothetical at first. But that’s the question that University of Toledo physicist Scott Lee recently posed to his undergraduate students in introductory physics, according to a paper published in The Physics Teacher in March. “I’m always looking for new and interesting things that will excite the students,” says Lee. “Everyone, at some point in their life, has been interested in dinosaurs, so I always try and bring [these] concepts [into the classroom].”

Like many other dinosaur aficionados, Lee’s fascination with the prehistoric beasts started at a young age, ever since he began finding fossils with his family growing up. Years later, in the early 1990s, he found a book by zoologist Robert McNeill Alexander — Dynamics of Dinosaurs and Other Extinct Giants — that uses physics principles to theorize how dinosaurs might have moved throughout the world. “That inspiration of applying physics to actual animals was interesting to me,” says Lee.

Plenty of other physicists have been just as fascinated by the biomechanics of dinosaur movement — particularly when it comes to calculating the running and walking speeds for prehistoric touchstones like Tyrannosaurs rex. For example, one study published in 2017 calculated that T. rex could only reach a maximum speed of around 12 mph; any faster, the researchers speculated, and the predator’s bones would have shattered. (Sorry again, Jurassic Park fans, but it almost certainly couldn’t have outrun a speeding car.) More recently, scientists created a 3D reconstruction — alongside a spring-suspended biomechanical model — of a T. rex tail to calculate that the animal likely lumbered along at just under 3 mph, according to a paper published in Royal Society Open Science in 2021.

Lee points to the variety of approaches that researchers can use to model such predictions. “We have the bones from many dinosaurs; with the Dilophosaurus and Tyrannosaurus rex, we have essentially complete skeletons,” he says. "By looking at modern animals, you can then get an idea of how big the muscles were to then calculate how big of a force you could apply to the leg of a dinosaur to model how fast it would go.” Other researchers have used robotics to model their predictions. “But, of course, this is just theoretical work,” Lee adds. “We don’t have any actual proof of how these things were.” When creating his own hypothetical for his students, Lee says that he chose Dilophosaurus because its top speed comes out much closer to Usain Bolt’s than, say, the more-famous T-rex. “I wanted to have something that’s surprising,” he says, “so it becomes a question of, 'Who’s going to win?' ”

The Race is On

For many students just starting to learn about physics, the difference between speed and acceleration isn’t always intuitive. “They tend to think of that as being the same thing — if you accelerate fast, you’re going to go fast,” says Lee. “Well, that’s true; but they’re actually very distinct concepts.” In preparing his exercise, Lee wanted to create a situation where the speed between two subjects was roughly the same, but because the accelerations were different, so was the outcome. So, a race between the world’s fastest human sprinter and a similarly-speedy dinosaur was born.

Lee was able to draw on more than just earlier studies that probed dinosaur locomotion. There’s actually a robust body of research analyzing Bolt’s speedster status. In 2008, when the Jamaican sprinter changed history at the Beijing Olympics by setting a new world record for the 100-meter dash (9.69 seconds), he was so far ahead of his competitors that he visibly slowed down before crossing the finish line. Physicists at the University of Oslo calculated that Bolt would have finished in about 9.55 seconds if not for his end-of-race celebration. Several years later, after Bolt broke his own record at the 2009 World Championships in Berlin, physicists at the National Autonomous University of Mexico found that his acceleration at the start of the race was 9.5 meters per second squared.

In tackling the exercise, the students applied concepts of kinematics — like displacement, as well as speed, velocity and acceleration — while modeling out the race using spreadsheets. They ultimately concluded that Bolt would easily outstrip Dilophosaurus, leaving the Early Jurassic predator in the dust by 2 seconds.

The acceleration (in meters per second squared) of Usain Bolt (left) and Dilophosaurus (right) during a theoretical 100-meter race. (Credit: Scott Lee)

As Lee emphasized to his class, the key factor was indeed acceleration. Following Newton’s second law of motion, where acceleration is dependent upon an object’s mass and force, Bolt’s smaller size would give him an early leg up. “Dilophosaurus has bigger muscles and can generate a bigger force, but that force goes up against the cross-sectional area of the muscle,” says Lee. “So the bigger something gets, yes it becomes stronger, but its acceleration becomes less. That’s why Dilophosaurus, because it’s so much more massive than Usain Bolt, accelerates a lot slower.” Lee compared the race to other examples in the animal kingdom today, like how lionesses leverage their acceleration to catch quicker prey.

In the future, Lee hopes to keep his students engaged by modeling similarly-enticing exercises. Right now, he’s using data collected from thousands of fossilized tracks to find the fastest-known dinosaur — and pit that dinosaur against a cheetah. But, continuing the trend set by his earlier lesson, Lee says that the exercise will show that even the speediest dinosaur was still slower than the fastest animal today.