Would Steroids at the World Cup Ruin the Beautiful Game? 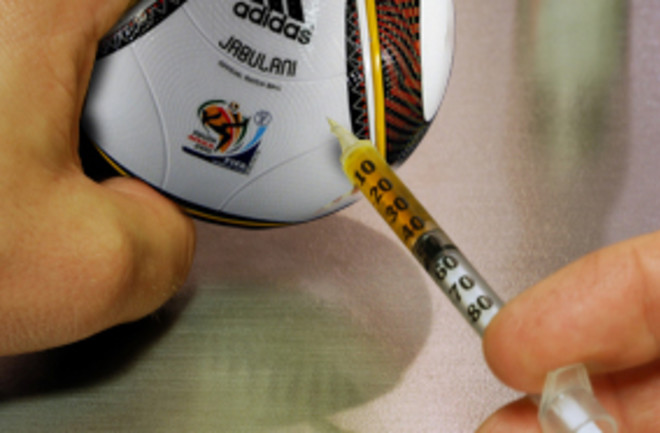 What would it be like if the World Cup allowed players to take steroids? Would it change the beautiful game? I'm not suggesting anything like "The All-Drug Olympics" (which remains one of my all time favorite SNL skits), but that scenario seems unlikely, given that most franchises wouldn't want their hundred-million dollar investments burning out after one game. We know most major athletes use various legal and not-illegal drugs, steroids, and substances to train, perform, heal, and recover as well and as fast as possible. So why is it alright for Olympic gymnasts to get cortisone injections for inflamed joints but wrong for baseball players to take steroids to increase muscle recovery times? Why is it alright for Tour de France riders to refuel intravenously overnight but wrong for them to inject their own blood back into their bodies? Where do we draw the line? Two world-class minds--Julian Savulescu, Uehiro Professor of Practical Ethics, and John William Devine, with the Oxford Center for Bioethics--will be debating the resolution "Performance enhancing drugs should be allowed in sport." Savulescu is an absolute titan in the bioethics field (check this 2005 Guardian interview) and a huge proponent of human enhancement (he edited a book by the same name) so Devine is a brave man for taking him on. Given that Devine's PhD thesis was on the "Challenges to Virtue in Political Office," a pretty thorny topic, I believe he will rise to the occasion. The debate will consist of three parts, and the opening salvo has already occurred. Savulescu's case for allowing drugs is quite convincing. Using the World Cup and Le Tour de France as his examples, Savulescu contends that heavy "within the rules" modification and enhancement already occurs. After explaining just how easy it is to circumvent to drug tests and still get serious benefits, he concludes:

There are only two options. We can try to ratchet up the war on doping. But this will fail, as the war on all victimless crimes involving personal advantage have failed (look at the war on alcohol, drugs and prostitution). Or we can regulate the use of performance-enhancing drugs.

The regulate vs ban debate is a common one, but Savulescu goes on to specify it's relevance to the unique world of sport:

The rules of a sport are not God-given, but are primarily there for 4 reasons: (1) they define the nature of a particular display of physical excellence; (2) create conditions for fair competition; (3) protect health; (4) provide a spectacle. Any rule must be enforceable. The current zero tolerance to drugs fails on the last three grounds and is unenforceable. The rules can be changed. We can better protect the health of competitors by allowing access to safe performance-enhancement and monitoring their health. We provide a better spectacle if we give up the futile search for undetectable drugs, and focus on measurable issues relevant to the athlete's health.

Devine opposes using the example of the rise of the power-serve at Wimbledon ruining the game by drawing all the focus onto a single ability instead of well-rounded competition:

Doping poses a similar threat to the balance of excellence in different sports. Lifting the ban on doping would unduly elevate in importance the capacity to metabolise performance-enhancing substances. In addition, the effects of their use on the performance of athletes may elevate certain excellences like power and speed at the expense of others, in a similar way to that which occurred in Wimbledon. Thus, the importance of other excellences in performance would be diminished in a way that is inconsistent with the purposes around which the sport is organised.

Rebuttals from both sides are forthcoming on the 17th of June and a final exchange, complete with comments from readers, will go up on the 24th.