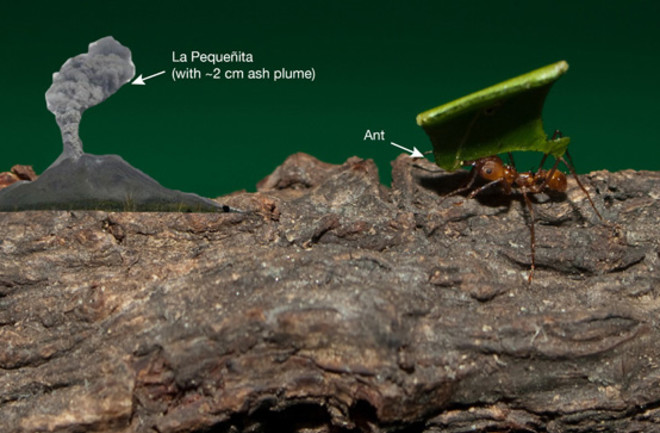 La Pequeñita, the world's smallest volcano, was recently discovered in Colombia. This eruption was seen on Aprl 1, 2014. Image: Modified from William Warby, Flickr This might be some of strangest news I've seen in a while, but apparently the world's smallest volcano has been discovered in the forests of southern Colombia. A group of scientists from the Universidad de Bolivar in Pasto were studying the habits of some of the ubiquitous leaf cutter ants when they stumbled across a tiny volcano in the middle of their field area. The lead scientists, Dr. Fernando Valenzuela was stunned by the tiny volcano: "it couldn't have been more than 3 cm tall, but it even had its own little plume!" The scientists have dubbed the volcano La Pequeñita and local Colombian authorities have set up a 10 cm exclusion zone around the volcano. They quickly brought in a team of volcanologists who were working on Galeras. Dr. Jake Peralta was equally surprised by the discovery: "I've never seen anything like this. It looks like any other arc volcanoes I've studied, but it fits in the palm of your hand ... not that I'd pick it up based on the ash plumes and pyroclastic flows I've observed." Peralta and his colleagues will continue to study the volcano to figure out how it can operate on such a small scale ... and whether it means a larger volcano will follow as this one grows. "The biggest question is where is this magma coming from for La Pequeñita. The volcano appears to be on the side of a log, so we might be seeing an entirely new way to form volcanoes from decaying trees." The group has submitted an abstract for the upcoming EGU meeting on their work at La Pequeñita.