World Science Festival: Will Scientists Ever Know Everything? 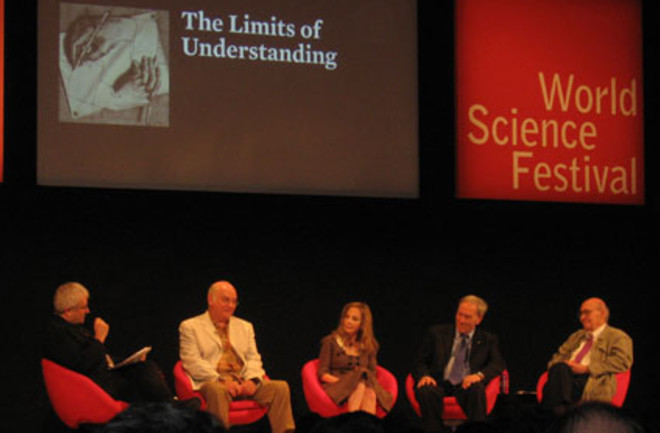 A mathematician, a philosopher, a physicist, and an artificial intelligence expert get together to define the limits of human knowledge. Chaos ensues. That’s the short version of Friday evening’s World Science Festival discussion, The Limits of Understanding, where panelists Gregory Chaitin, Rebecca Goldstein, Mario Livio, and Marvin Minsky bravely tackled the scientific and philosophical implications of Gödel’s incompleteness theorem for a packed house. Gödel’s work has perplexed thinkers for decades, but the on-stage team dispensed with the basics pretty quickly. As philosopher Goldstein put it, Gödel’s infamous proof from 1931 revealed that “there are true propositions [in mathematics] that can’t be proved.” Livio took a stab at incompleteness via analogy to physics: “We physicists look for a theory of everything in physics; Gödel showed that there is no theory of everything in math.” In keeping with the theme of a theorem that overflows with philosophical implications, the ensuing conversation leapt from Gödel’s proof to evolution, the effectiveness of mathematics at describing the universe, and even the nature of consciousness. (Consciousness, Minsky insisted, is not a single thing, but is actually a catch-all term philosophers and psychologists use for 26 distinct problems about the human mind that they don’t fully understand. It was around this time that the moderator, Nobel-prize-winning biologist Paul Nurse, announced that he was “giving up” on corralling the discussion.) One of the more interesting ideas that crept up was whether, in the wake of Gödel, math can reveal any objective, independent truths that exist “out there” in the real world, or whether it’s just a system of rules built by humans, relying on our peculiar perceptions of the universe. Livio proposed a compromise: “Are we discovering mathematics, or inventing them? It might be an intricate combination: We invent concepts and then discover the relations among them,” he said, pointing to the square root of negative one—the imaginary unit—as an invention that opened up whole new realms of discovery in math. As for Gödel, mathematician Chaitin’s take was probably the most honest and salient: “Eighty years later, we still don’t know what the hell Gödel proved,” he said. The audience seemed happy to agree with him on that one. Related Content: Discoblog: World Science Festival:Waiting for Einstein's Gravity Waves Discoblog: World Science Festival: The Science of Star Trek Discoblog: World Science Festival: Telling Scary Stories of Strangelets Discoblog: World Science Festival: Listening to Illusions of Sound Discoblog: World Science Festival: The 4 Ways to Find E.T.