World Science Festival: What Are the Coolest Jobs in Science, and How Do You Get Them? 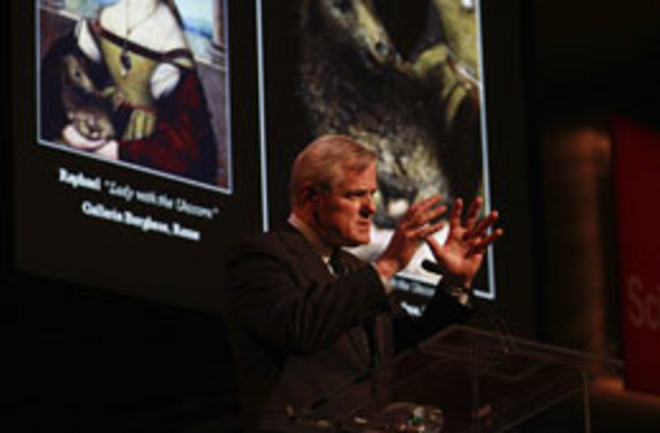 At Friday's "Cool Jobs" panel at the World Science Festival, a microbiologist, parasitologist, bioengineer, and biologist demonstrated that science is in fact not only important but also pretty darn cool. The four panelists presented themselves and their work in very different ways. Microbiologist Hazel Barton showed pictures of herself completely covered in mud while studying microbes in caves. Bioengineer and "Da Vinci Detective" Maurizio Seracini played a trailer for a documentary on his discovery of a long-lost famous mural by the mysterious painter. Biologist Tyrone Hayes provided vivid examples of the impacts of pesticides on frogs. Dickson Despommier showed architectural drawings of vertical farms—a topic we've touched on before. But even more inspiring—especially for somebody who already knows that science is cool, which we do—was how the guests explained their career progressions. Barton stressed that she had taken a meandering path to become a microbiologist, originally focusing on biology because she hated physics, chemistry, and math. Seracini had studied biomedical engineering as an undergraduate and then attended three years of medical school and one year of architecture school before employing new imaging technology to the field of art history. Power had always loved frogs—the first book given to him as a child was about the amphibians—but seeing the effects of pesticides on amphibians had led to public health advocacy on behalf of farm workers. Despommier said he wanted to learn as much as he could by staying in school and teaching. Unfortunately, delivering all that inspiration took a long time. Although host Majora Carter did a good job posing interesting questions to each presenter, there was no time for questions from the audience—something essential if the goal is to make science more accessible. Related: Discoblog's Full Coverage of the 2009 World Science Festival