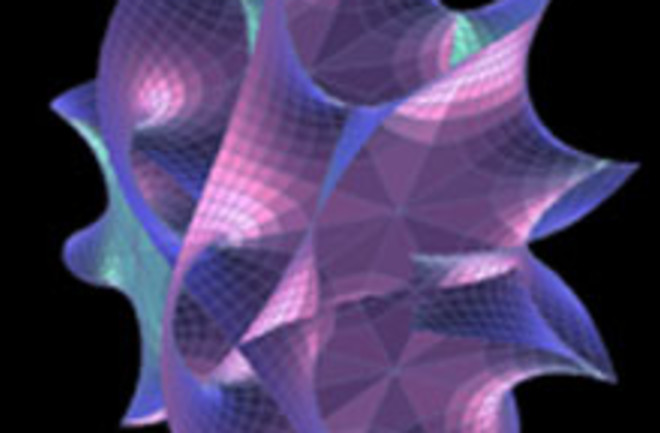 On stage at the World Science Festival on Saturday night, festival co-founder Brian Greene recalled the early days of string theory--the theory that brings together competing ideas in physics by postulating that there exist six or seven extra dimensions beyond space and time. Greene was a graduate student in physics when string theory got its start, and remembers waking up early each morning to run to the mailbox in search of news of harmony and peace; that is, for signs that the long, obdurate conflict between general relativity and quantum mechanics was resolving itself into a beautiful universe of tiny vibrating strings. That was in the 1980s. Now, almost thirty years later, the conflict continues, and the strings—though beautifully imagined by artists and scientists—still haven’t made themselves apparent in the form of a testable prediction. This is a big problem for skeptics like Lawrence Krauss, who insist that untestable scientific theories are—well, not really science. But Krauss, presumably out of deference to his host, didn’t say that on stage on Saturday. Instead, he took a soft approach, presenting the audience with a picture of an anthropological find, a 33,000-year-old wood carving of a half-man, half-lion creature. “Who knows what the artist was thinking when he—or she—created this?” he mused. Perhaps the artist had seen a lion before, and had also seen people, and had imagined the existence of a combination-type-creature. “Maybe that’s what string theory will look like in another 33,000 years,” Krauss suggested. Greene said he thought string theory was “a touch more well-motivated than the lion-human,” but agreed that human understanding is a pitiful thing (especially when limited by the senses). The most effusive string theorist on the panel was Shamit Kachru, who described himself as "still excited"--more like the young, mailbox-happy version of Brian Greene, ever optimistic for the arrival of proof. John Hockenberry, the panel’s moderator, asked Greene if he thought experimental evidence would come during his lifetime. “I’d be surprised,” said Greene. “And in your lifetime?” Hockenberry asked Kachru. “…I’d be surprised,” conceded the young physicist reluctantly. “I’d be surprised if we weren’t surprised,” concluded Krauss, before the lights went down. Related Content: Discoblog: World Science Festival: Will Scientists Ever Know Everything? Discoblog: World Science Festival: Waiting for Einstein’s Gravity Waves DISCOVER: The Man Who Plucks All the Strings, an interview with Brian Greene DISCOVER: String Theory in Two Minutes or Less (videos) Image: World Science Festival