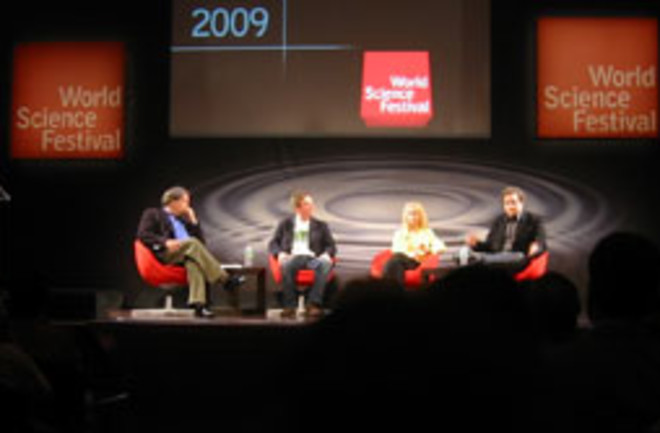 Friday night’s "!@#$% Traffic: From Insects to Interstates" panel during the World Science Festival had all the makings of a giant show-and-tell: a merrily provocative title, a wildly diverse collection of topics, and a lineup of much-talked-about speakers. In introducing the session, held at New York University’s Kimmel Center, festival co-founder Brian Greene called traffic an "annoying problem." But before long it was harder to care about the annoyance, in the face of the fascinating paths the speakers described to cure it. The stage was set by Iain Couzin, a mathematical biologist who studies collective behavior in, well, everything: swarms of ants, locusts, cells in tissues and tumors, schools of fish, pedestrians. Where you’d least expect it, he finds simple rules governing how the members of different biological systems move around and interact. Ants that lay down pheromones that others can follow—and so create roads "where and when they need them, on the fly"—are, he said, "one of the wonders of the world." Impressively, the panel didn’t just ponder the questions presented by traffic, but leaped into real life problems and solutions. Anna Nagurney (who, like Couzin, studies a dizzying list of systems—the Internet, global supply chains, electric power distribution, and financial networks among them) was grateful for the opportunity to talk about the recent shutdown of stretches of Times Square—done not just to create pedestrian-friendly spaces, but, amazingly, to trim the travel time of drivers, too. That traffic pattern, she said, illustrates a paradox discovered by Dietrich Braess in 1968. Think of it like this, she explained to DISCOVER after the session: Say drivers who need to get from 48th St. and 9th Ave. to 40th St. and 5th Ave. have three routes to pick from: red, green, or blue. The street cutting diagonally is Broadway. The trouble with the blue/Broadway route is that it loads up the first part of the red route, and the last part of the green. Take away Broadway, and the blue traffic is forced to pick red or green, not both. So, if theory serves, everybody—reds, greens, and former blues—gets where they’re going faster. (If you want to see that in equations, not words, go here.) Of course, politely explaining this to a driver isn’t going to get her off Broadway, ’cause everybody’s looking out for themselves. And, unfortunately, none of it works unless lots of people make the switch. So shutting down Times Square may have helped everyone to cooperate. The third panelist, Mitchell Joachim, was decidedly less earth-bound in his solutions for humanity’s transportation needs. Think jet packs, cars coated in air pouches, or a ferry "powered by the human buttocks." He envisions cars that are "nerf-like" and "social," communicating with each other and with "intelligent" streets (not so unlike ants and their pheromone trails) to allow the system to come up with communal solutions on the fly to move traffic more efficiently. In other words, in Joachim’s world, you wouldn’t have sole control of your car—a notion that drove moderator Robert Krulwich to gasp, "Are you an American?" Judging from the laughter each time Joachim flashed slides of massive vehicles that looked like piles of marshmallows or blimps, the audience was entertained by his ideas. Asked by DISCOVER what he thought about all the laughter, he said, "If they’re laughing, that means they bought it, they think it’s great, and that it seems like a realizable solution. A New York crowd would have done something else if they didn’t believe it…We’re so upset with the current system, that the only response at this point is aggression or humor. The solutions that we need are rather broad in their stroke." Related: Discoblog's Full Coverage of the 2009 World Science FestivalImage: Megan Talkington