Weightlessness takes a heavy toll on the health of our astronauts 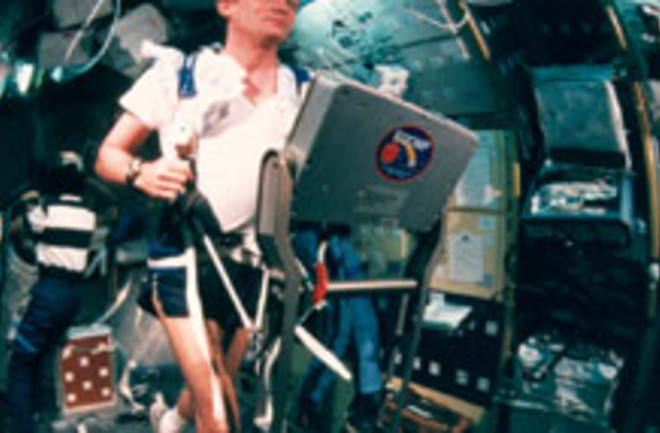 Astronaut Norm Thagard exercises to reduce bone loss during his 1995 space shuttle mission. Stimulating muscle with low-level vibrations may do the job even better. | Courtesy of NASA/Russian Space Agency

Sign up for our email newsletter for the latest science news
The latticelike material in these photomicrographs is trabecular bone—low-density bone that is especially vulnerable to osteoporosis. In these images, the femur of a sheep treated 20 minutes a day for a year (A) shows a third more bone growth than an untreated sheep (B). | Courtesy of Clinton Rubin/SUNY at Stony Brook

A few days after the space shuttle Columbia exploded in the Texas sky last February, Sally Ride, the first American woman in space, addressed the tragedy from a shuttle veteran's point of view. "There is no astronaut in the nation who is not well aware of the delicate nature of the flight," Ride said. "Every astronaut who goes up knows the risk he or she faces."

Spaceflight poses risks for astronauts even when it doesn't end in disaster. Crews on the International Space Station spend months at a time weightless, and without the grounding force of gravity, their bodies go into a tailspin. Most get motion sickness their first few days aloft when signals from the eyes conflict with confused messages from the inner ear and other gravity-sensing organs. Blood and other fluids that would be drawn into the legs and feet on Earth begin to pool in the chest and puff up the face. The heart weakens because it no longer has to work as hard. Muscles that stabilize the legs and spine become more feeble too. Especially troubling is the deterioration of bone that occurs in the absence of gravity. A postmenopausal woman at risk for osteoporosis loses about 2 percent of her bone mass each year; orbiting astronauts lose that much each month.

"While weightlessness seems like everyone's dream of how to maneuver through life without much physical expenditure, it's actually a medical nightmare of gigantic proportions," writes former NASA consultant William Evans, author of the conditioning program AstroFit.

In the four decades since human spaceflight began, scientists have struggled to understand the effects of weightlessness on the human body and to come up with strategies for combating them. Space station astronauts, for example, now spend up to two hours a day working out while strapped to a treadmill with bungee cords. But exercise offers minimal protection against extraterrestrial wasting, which remains one of the main factors limiting manned space travel. An astronaut who braved the nine-month trip to Mars, for example, would probably arrive too weak or wobbly to walk. Even shuttle crew members who may be up only a week or two often need days of recovery before they can run, drive, or stand up without getting dizzy. Their brittle bones take much longer to rebuild.

"You have all these changes as the person becomes more of a space creature than an Earth creature," says human-factors specialist Malcolm Cohen of the NASA Ames Research Center in Moffett Field, California. "It's not so bad, as long as the person stays weightless. But then they have to come back to Earth."

Cohen and others think the cure could be hypergravity: a force stronger than Earth's gravitational field delivered to astronauts on a centrifuge. A centrifuge operates on the same outward-pushing principle as a salad spinner. An arm turns horizontally from a central hub, and if a person lies on the arm with his head toward the pivot point, the outward-pushing force translates into a downward push from the head toward the feet that challenges the heart, muscles, and bones much as standing on Earth does. How much force the device supplies depends on how fast it spins and how long the arm is. The typical human can withstand 2 to 3 g's (1 g is the measure of the gravitational field on Earth), and researchers believe a few minutes of hypergravity in space might be able to make up for days of free floating.

"The basic idea is to use short blasts of g to reverse some of the adaptations to weightlessness," says space physiologist Charles Oman of the Massachusetts Institute of Technology.

A centrifugelike device was first flown on Skylab in the 1970s to study the neurovestibular system—the network consisting of the eyes, the inner ear, and the brain centers that govern balance, perceive body position, and activate motion sickness. The last centrifuge went up on a shuttle in 1998. Scientists have become more interested in centrifuge studies as it's become clear that existing countermeasures don't adequately maintain heart and muscle tone, stop bone loss, or maintain the vestibular system. Even strapped to a treadmill with bungee cords, an astronaut running in space bears no more than 60 percent of his terrestrial weight.

In studies at NASA Ames last summer, four people spent 22 hours each in a room at the end of a 28-foot arm that turned at a rate of up to 10 rpm, generating up to 11/2 g's. Cohen measured their heart rates and blood pressures while they were lying down, sitting, and standing up—before, during, and after the experiment. He wants more data and more volunteers ("It's not a pleasant experience," he admits) before releasing the results. At MIT, Oman and his colleague Larry Young pay subjects $10 an hour to ride a bed-length centrifuge for several hours. Oman thinks that centrifuges could help train the neurovestibular system to adapt more readily to weightlessness, allowing astronauts to move between Earth, space, and other planets without days of debilitating motion sickness. As a case in point, Oman notes his experience with NASA's so-called Vomit Comet. The modified KC-135 jet flies in a parabolic wave pattern more than 30,000 feet over the Gulf of Mexico, first climbing steeply for 10 seconds, generating up to 2 g's, and then diving for another 10 seconds, during which the passengers experience nearly weightless free fall. The cycle can be repeated 60 times in an hour. First-timers gave the plane its nickname, Oman says, but frequent fliers like him get used to the ride.

Biomedical engineer Clinton Rubin of the State University of New York at Stony Brook has discovered that high-frequency vibrations may also strengthen bones. Two years ago he reported that sheep held on a vibrating platform 20 minutes a day, five times a week for a year built up more new bone in their legs than a control flock. He hopes to launch a similar experiment testing humans in space in 2006. He says the treatment feels like "standing on a sidewalk when a heavy truck goes past. We are trying to trick the bones into thinking the muscles are active."

Bone-building drugs might also help prevent bone loss during extended space travel. But countermeasures that target one physical system aren't as appealing as those, like the human centrifuge, that address a number of systems at once. And space physicians still need to find ways to limit other hazards of human spaceflight that don't have anything to do with weightlessness, such as disturbed sleep and exposure to cosmic radiation. These issues of astronaut health "must be dealt with now before fundamental decisions are reached concerning the appropriate time for humans to move away from Earth on voyages of exploration," Ronald White, former associate director of the National Space Biomedical Research Institute in Houston, wrote in a recent paper.

Whether or not NASA commits to a manned Mars mission, it plans to install new telescopes in space by 2020 that will be 1 million miles away—a one-month round-trip from Earth. Some experts say the instruments will need human mechanics to service them.