Model Minority? No, Thanks!:

In reality, Indian Americans, much like other immigrants, have diverse experiences and backgrounds.

Indian Americans are doctors, engineers and lawyers, as well as small business owners, domestic workers, taxi drivers and convenience store employees. Community members hold a range of immigration statuses and include naturalized citizens and H-1B visaholders, guestworkers and students, undocumented workers and green card holders. Some have access to higher education while others struggle to learn English in a new country. As with all communities, Indian Americans do not come in the same shape and form, and cannot be treated as a monolith. 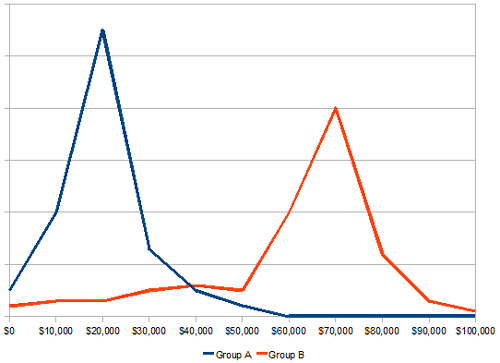 Both groups are characterized by income diversity. But that doesn't negate the fact that they differ a great deal in their distributions. Appeals to vague qualitative terms in rhetoric are useful because they obscure these details. On the other hand, what if I was to say that Mexican Americans exhibit a great deal of diversity, so we shouldn't characterize them as an "at risk" group when it comes to outreach for higher education? I suspect then the same individuals who go qualitative when confronted by inconvenient facts will reveal themselves to be very aware of quantitative social statistics! Rigor in the service of me, not thee! Check out this prose:

Comparing Indian Americans with Mexican Americans, as Richwine does ("In sharp contrast to Indian Americans, most U.S. immigrants, especially Mexican, are much less wealthy and educated than U.S. natives, even after many years in the country) is an example of the sort of constructed division between immigrant communities that creates cultural and ethnic hierarchies. The use of the model minority label results in placing Indian Americans "above" other communities based on certain factors such as educational aptitude or work ethic - which are clearly shared across ethnic and cultural lines. It further isolates Indian Americans and makes it challenging to build solidarity that naturally arises among communities that share common experiences as immigrants and people of color in America.

Shorter: Eyes on the prize, whitey is evil.