Will We Ever Travel Faster Than Light, a la Star Trek? 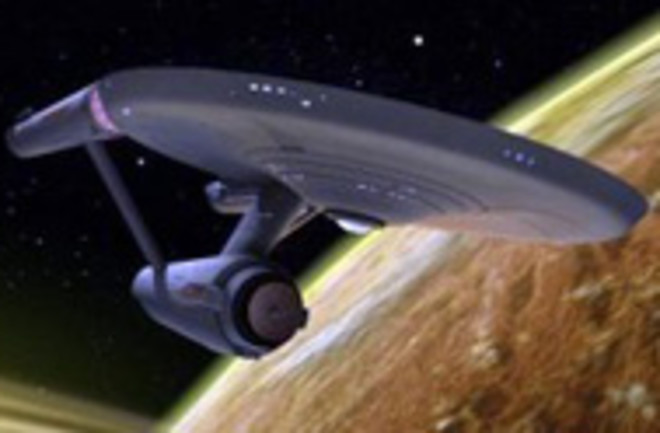 Just because Albert Einstein said that the faster-than-light travel is impossible isn't any reason to stop trying for it, a number of Star Trek-loving theoretical physicists have declared. To achieve the starship Enterprise's fabled warp speed, they propose simply bending the rules of physics a bit. The speed-of-light speed limit, they argue,

only applies within space-time (the continuum of three dimensions of space plus one of time that we live in). While any given object can't travel faster than light speed within space-time, theory holds, perhaps space-time itself could travel. "The idea is that you take a chunk of space-time and move it," said Marc Millis, former head of NASA's Breakthrough Propulsion Physics Project. "The vehicle inside that bubble thinks that it's not moving at all. It's the space-time that's moving" [SPACE.com].

But how do you move a bubble of space time around the universe? For an answer, researchers Gerald Cleaver expands on a theory first proposed in 1994 by Mexican physicist, Michael Alcubierre. It might be possible

to expand space behind a vehicle, say the Enterprise, and shrink space in front of it, thereby creating a bubble that could move through Einstein's space-time fabric at speeds much greater than the speed of light.... Cleaver, who earned his doctorate at the California Institute of Technology, in the heart of surfing country, likens it to "surfing a wave" [ABC News].

The bubble, Cleaver says, could theoretically be created by manipulating dark energy, which was thought to play a role in the accelerating expansion of the universe. Says Cleaver:

Got all that? Oh yes, and this may all be happening in the 11th dimension. And it would take a bit of an energy surge to get the space-time bubble going. Cleaver estimates

that the amount of energy needed to influence the extra dimensions is equivalent to the entire mass of Jupiter being converted into energy. "That is an enormous amount of energy," Cleaver said. "We are still a very long ways off before we could create something to harness that type of energy" [Photonics Online].