Will Human Teleportation Ever Be Possible?

As experiments in relocating particles advance, will we be able to say, "Beam me up, Scotty" one day soon? 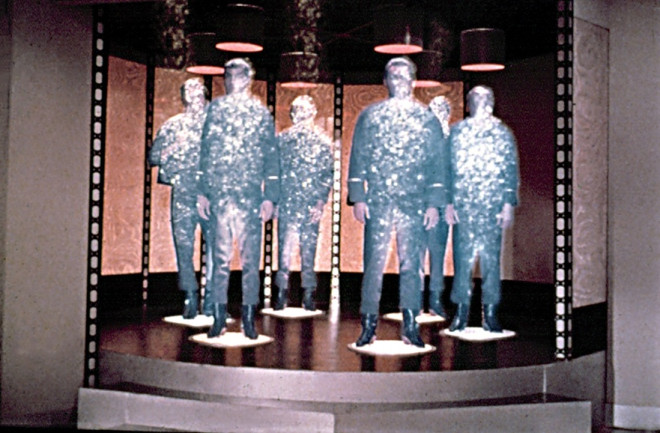 Star Trek-style teleportation isn't as crazy as it sounds, though it would depend on intricate quantum information systems, as developed by physicist Alex Kuzmich. (Credit: Paramount/Everett Collection)

Lately it seems like the research world has launched into a full-throttle game of “what superpower would you choose?” For those who desire invisibility, engineers are developing exotic materials that can bend an object’s light completely out of view. For would-be telepaths, neurobiologists are working on ways to read one person’s brain wave patterns and transmit them into another person’s head.

My personal favorite, though, is perhaps the most outrageous fantasy power of all: teleportation, the ability to arrive without traveling. Imagine being able to dematerialize from your living room and show up the next moment in Venice or the Amazon rainforest or the rings of Saturn (wearing an appropriate space suit, of course). The idea is so seductive that it has been a mainstay of science fiction since the early days of Star Trek and Doctor Who, but it also seems an affront to common sense.

Fortunately, common sense doesn’t guide the rules of quantum physics, as evidenced by a brief 1993 paper with a mouthful of a title: “Teleporting an Unknown Quantum State Via Dual Classical and Einstein-Podolsky-Rosen Channels.” In it, a team led by Charles Bennett of IBM’s T.J. Watson Research Center demonstrated how to link two particles together a certain way, and keep them linked even at great distances.

That connection, known as quantum entanglement, has a remarkable power. It enables someone holding one of the particles to send, instantaneously, a chunk of information — the “unknown quantum state” in the paper’s title — to someone else holding the other particle. Because of that weird quantum connection, the information goes from one person to the other without physically passing between them. It arrives without traveling.

Relocating information from one particle to another may not sound a lot like, “Scotty, energize,” but at a fundamental level, they are two versions of the same process. Every atom in Captain Kirk’s body is a set of data (type of atom, location, energy state and so on); the captain as a whole is just an enormous collection of those data sets. Teleport all the relevant information to the surface of a planet, and you can re-create Kirk exactly as he was aboard the ship.

Well … maybe. Teleportation technology has progressed rapidly since 1993, and it is now being tested in the lab. But as the crew of the Enterprise repeatedly discovered, human teleportation is hard to do right and easy to do wrong. There may be better, simpler ways to attain that type of superpower.

Even a limited form of teleportation could be a revelation. Physicists are hard at work developing a quantum computer, a related technology that processes information using individual atoms or particles instead of transistors. Such a computer could vastly outperform traditional processors on certain types of calculations: cracking codes and solving complex equations, for instance.

More exciting, a quantum computer could lead to the first fully realistic simulations of quantum phenomena. All of biology, chemistry and nanotechnology fundamentally operate at the quantum level. Being able to understand those processes on their own terms would be a giant leap.

Teleportation is a key enabling technology for quantum computing because it allows you to extract the information the computer produces without disturbing the rest of the system. No teleportation, no results. Last year, a team led by physicist Alex Kuzmich, then at the Georgia Institute of Technology, demonstrated a practical form of information teleportation by entangling a computer’s atoms and photons (particles of light) on demand. Once you can do that, you can take advantage of that quantum connection to beam data out of your quantum computer and get it exactly where you need it.

And once you can build a quantum computer, the possibilities keep going. Kuzmich and others envision entire “quantum networks” that would link together multiple computers and provide high-speed communications between them. If you think that idea sounds vaguely familiar, you are right; it’s a quantum version of the Internet.

A primary reason to go down this path is security. Working with entangled particles requires incredible delicacy, but that also makes it incredibly private. If anyone tries to eavesdrop on an entangled message, the very act of unwanted listening disrupts the whole teleportation process. Any message sent over a quantum Internet is therefore perfectly secure — or as perfect as anything known to humanity. Heartbleed bug? No problem.

Yeah, yeah, yeah. If you are anything like me, you want to know about the unlimited form of teleportation, the kind that beams people from place to place. Let me temper your enthusiasm with two considerations, one philosophical and one technological.

First, extracting all the information from Captain Kirk’s body (or yours) requires knowing the physical state of every atom, which would require total disintegration. Each time Kirk steps into the transporter, then, he is committing suicide and then getting reborn at the other end. Second, the amount of information required to re-create him is staggering — about 4.5 x 1042 bits, by one estimate, determined recently as part of a highly entertaining graduate physics project at the University of Leicester.

Nobody knows how to collect and transmit that much information. And remember how the slightest disturbance ruins quantum entanglement? The process of reassembling your atoms would inherently scramble the information. At this point, it’s suicide at one end without rebirth at the other. Kirk might as well put on a red shirt first.

The teleportation situation becomes much less bleak if you bend the definition a bit, however. As many a video game player has noticed, the human brain has a remarkable ability to project itself outside the body and into other objects or virtual spaces. NASA is exploiting that ability with Human Exploration Telerobotics, a project that lets astronauts “inhabit” robots in locations that are fatal or inaccessible. A mechanical astronaut will soon be strolling outside the International Space Station. In the near future, you might be able to experience space exploration vicariously through a Mars rover or mechanical arms poking at a distant asteroid.

If that’s too much of a cheat for you, how about a DNA fax machine? Biotech guru J. Craig Venter proposes that if we find microbial life on Mars, we could sequence its genome locally, transmit the information and rebuild the organism here on Earth. In principle, Venter notes, the process could go the other way: It would be possible to send human DNA, along with an appropriate incubator, to distant planets and synthesize people at the other end. Then your clone could start setting up shop on a world orbiting Alpha Centauri B.

Cloning still doesn’t fulfill the full superpower fantasy of teleportation, I realize. No, what you ideally want is a complete mind-upload to your distant doppelganger, so that you/he/she can really be there. That would reduce the teleportation problem from “probably impossible” to “wildly difficult.” That still leaves the problem of the brain’s enormous information content. But if you accept that information is the only thing that defines your mind, the task seems feasible. No longer do you need to assemble atoms meticulously in the right locations; just the facts will do.

Note a fascinating common thread through all these possibilities. Whether you regard yourself as a pile of atoms, a DNA sequence, a series of sensory inputs or an elaborate computer file, in all of these interpretations you are nothing but a stack of data. According to the principle of unitarity, quantum information is never lost. Put them together, and those two statements lead to a staggering corollary: At the most fundamental level, the laws of physics say you are immortal.

How about that for a superpower?

This article appeared in print as "The Ups and Downs of Teleportation."