Wilderness vs. Monitoring: The Controversy of a New Seismic Network at Glacier Peak 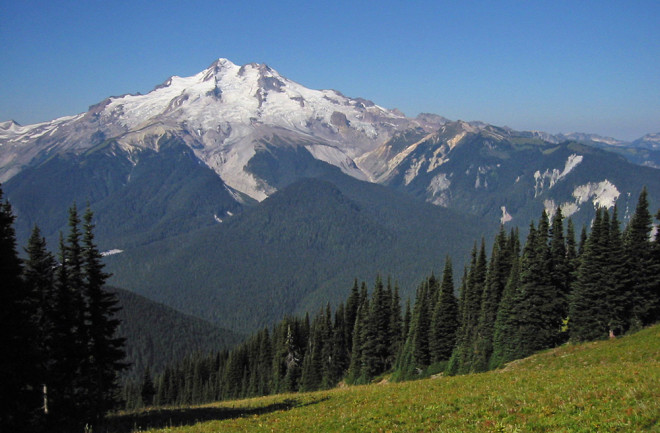 Glacier Peak in Washington. Wikimedia Commons. One of the most potentially dangerous volcanoes in the Cascades is Glacier Peak in Washington. It produced the one of the largest eruptions in the past 20,000 years in this volcanic range that spans from British Columbia to California. Multiple eruptions around 13,500 years ago spread ash all the way into Montana. Over the last 2,000 years, there have been multiple explosive eruptions that have impacted what became Washington state and beyond. Put on top of that the many glaciers on the slopes of Glacier Peak that could help form volcanic mudflows (lahars) during a new eruption, and you can see that Glacier Peak is a real threat. Yet, even with this hazard posed by the volcano, there is very little in the way of monitoring equipment on the volcano. Currently, there is a lone seismometer on Glacier Peak to measure earthquakes, one of the most important pieces of information needed to monitor volcanoes. A single seismometer is better than no seismometer, but it can only give us so much information. Without a network of at least 3 seismometers (a"seismic network"), we can really only measure if earthquakes are occurring at the volcano and not exactly where and how far beneath the volcano the temblors are happening. This is what is installed at a truly restless volcano like Mount St. Helens. These two pieces of information -- location and depth -- are vital for understanding what might be happening at Glacier Peak if any earthquake swarm were to happen. Otherwise, we might have difficulty differentiating between earthquakes happening due to fault motion near the volcano or shallow changes in the hydrothermal system in the volcano rather than magma moving into the volcano from deep below.

The lone seismometer at Glacier Peak. USGS. So, it might seem to be a no-brainer that new USGS seismic stations should be set up on Glacier Peak. However, that's where things get messy. Glacier Peak is within designated US Forest Service Wilderness area, so modification and use of the land are very tightly regulated and restricted. This is rightly so -- we need to protect our wilderness from encroaching development or resource exploitation by people who don't value a wild America. The problem becomes that a seismic station, a fairly small installation that might have a 3 by 3 meter footprint, still disrupts wilderness as installing it requires the seismometer to be buried and secured to a stable platform (like rock or poured concrete). Additionally, although many stations are solar, they do require back-up batteries that need to be changed ... and if there are no roads and trails in the wilderness, getting material to the station is next to impossible. In order to perform repairs and resupply batteries, helicopters will be needed, so ideally, a helicopter pad near the seismic stations is needed for safe operation. This is a bigger deal as a helicopter pad might take up a few hundred square meters. It is this sort of disruption that has the Wilderness Watch speaking out against the installation of new seismic stations at Glacier Peak. UPDATE: Here is some more detail on why this is all needed:

In a northerly, (sub)alpine setting, stations that need to be autonomous and deliver high-quality (likely broadband) data in real-time, all-year will have steep power demands (~1500 lbs of Pb-acid batteries) as well as a need to be hardened against the elements.

The Wilderness Act is fairly specific about what is and isn't allowed in Wilderness Areas like the Okangan-Wenatchee National Forest where Glacier Peak resides. The USGS applied for a permit from the USFS in order to build and maintain the seismic stations and this permit was approved. However, Wilderness Watch says that the permit as stated is in violation of the Wilderness Act

because it doesn't provide sufficient cause for a disruption like seismic stations and helicopter access. This is a challenging issue to resolve. Wilderness Watch is likely apprehensive of any transgressions of the Wilderness Act considering the current presidential administration. Such a permit that, in their eyes, violates the Wilderness Act

, could open the door for development in other Wilderness Areas. So, they stand opposed to this seismic station. However, the USGS likely did not arbitrarily decide on the location of the seismic stations. In order to run an effective seismic network that can give volcanologists and seismologists the data they need to determine location and depth of earthquakes, the stations have ideal locations in terms of relative position and distance from the volcano. These are likely all within the Wilderness Area around Glacier Peak. In the end, a seismic network is clearly needed at Glacier Peak -- and likely all Cascade volcanoes. However, the wild locations of many volcanoes means that these bits of technology will intrude of what is seen as untouched wilderness. That being said, the potential danger that could happen if we are caught off guard by an eruption far outweighs what is likely a small impact on the Wilderness Area. Although their hearts are in the right place, wilderness organizations need to also think of the broader needs of the scientific community when it comes to potential massive hazards like an eruption of Glacier Peak.