Astronomers have now calculated the likelihood that the signal came from another advanced civilization — and the numbers don't look good. 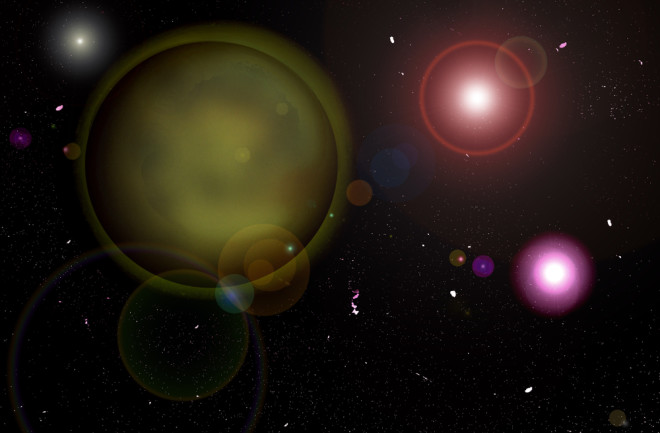 On April 29, 2019, the Parkes Radio Telescope in Australia began listing to the radio signals from the Sun’s nearest neighbor, Proxima Centauri, just over 4 lightyears away. The telescope was looking for evidence of solar flares and so listened for 30 minutes before retraining on a distant quasar to recalibrate and then pointing back.

In total, the telescope gathered 26 hours of data. But when astronomers analyzed it in more detail, they noticed something odd — a single pure tone at a frequency of 982.02 MHz that appeared five times in the data.

The signal was first reported last year in The Guardian, a British newspaper. The article raised the possibility that the signal may be evidence of an advanced civilization on Proxima Centauri, a red dwarf star that is known to have an Earth-sized planet orbiting in its habitable zone.

But researchers have consistently played down this possibility saying that, at the very least, the signal must be observed again before any conclusions can be drawn. Indeed, the signal has not been seen again, despite various searches.

Now Amir Siraj and Abraham Loeb from Harvard University in Cambridge, Massachusetts, have calculated the likelihood that the signal came from a Proxima Centauri-based civilization, even without another observation. They say the odds are so low as to effectively rule out the possibility — provided the assumptions they make in their calculations are valid.

The new signal was found by researchers at the Breakthrough Listen project, an international collaboration of astronomers searching for evidence of extraterrestrial intelligence and funded by the billionaire Yuri Milner. They called the signal Breakthrough Listen Candidate 1 or BLC1.

The signal is interesting because narrowband tones do not generally occur in nature, which instead tends to produce broadband noise. But BLC1 has all the characteristics of a technosignature — one that originates from a technologically-capable civilization.

By far the most likely origin is Earth. Most signals of this kind are quickly attributed to radio interference from nearby mobile phones, microwave ovens, passing cars, aircraft and satellites and the like.

But the team analyzing this signal have yet to find an obvious source. And they say the frequency of the signal drifts slightly over time, a phenomenon consistent with a signal from a rotating or orbiting body. This has increased the intrigue.

This principle has a storied past. It is named after the 14th century astronomer Nicolaus Copernicus, who suggested that the Earth did not sit at the center of the universe and instead orbited the Sun. Almost 30 years ago, the astronomer Richard Gott used the same principle to show with 95 percent confidence that our species is likely to survive for at least 200,000 years but no more than 8 million years.

The basic idea is that humanity had a beginning and will eventually come to an end. We currently sit somewhere on the timeline in between but at no special place or time, not particularly near the beginning or the end. In mathematical terms, we are unlikely to be in the first 2.5 per cent of humanity’s existence nor in the final 2.5 per cent. So with 95 percent confidence, we must be in the middle.

Then it’s just a question of slotting in the numbers. We know our species is about 200,000 years old which must be at least 2.5 per cent of the total. That suggests with 95 per cent confidence that humanity should be around for at least another 200,000 years but not longer than 8 million years.

Indeed, Gott used the same argument to suggest that the chances of finding evidence of intelligent life elsewhere in our galaxy is tiny, even if we assume that these civilizations must exist. Given that we have only been radio-capable for just over a hundred years, the chances of this period overlapping with another civilization’s similar capability is tiny. “A targeted radio search of 1,000 nearby stars is not likely to succeed,” says Gott.

Siraj and Loeb apply the same argument to the likelihood that our civilization’s radio capability overlaps with another civilization’s capability on Proxima Centauri. And the numbers are not promising. They conclude that if the Breakthrough Listen Candidate 1 was produced by a technologically advanced civilization, this would violate the Copernican Principle by eight orders of magnitude. “This rules out, a priori, Breakthrough Listen Candidate 1 (BLC1) as a technological radio signal from the Alpha Centauri system,” says Siraj and Loeb.

Indeed, given the huge number of potentially habitable planets in the galaxy, the idea that two neighboring stars should host advanced civilizations at the same time seems extraordinarily unlikely.

Unless there are other factors at work. One such factor is panspermia — the idea that life is seeded from space. That increases the chances of neighboring stars hosting advanced life at the same time. However, this argument is complicated by the fact that life emerged on Earth some 4.5 billion years ago before the Sun and Proxima Centauri became neighbors.

Of course, the Copernican Principle cannot rule out entirely the possibility that the signal heard at Parkes is from another civilization. It’s just that the possibility of it being a stray signal of terrestrial origin are many orders of magnitude more likely. In the meantime, all astronomers can do is point their radio telescopes back at Proxima Centauri and wait.

Ref: The Copernican Principle Rules Out BLC1 as a Technological Radio Signal from the Alpha Centauri System: arxiv.org/abs/2101.04118