Why The Birds Are in Trouble 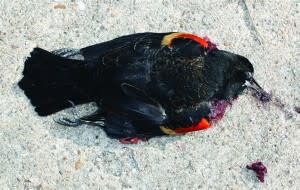 A surprising number of people contacted me during the past week about the recent mass wildlife deaths reported all over the world and posted across the internet. Some say it's a sign of "End Times" (

) and others wonder what's changed in the environment. John Roach has got the full story, including an interview with conservation biologist Stuart Pimm about the real reason we should all be concerned: Although such events are relatively routine (just not typically reported),

one in six bird species is threatened with extinction.

That's a pretty big deal. In fact, it's just the kind of crisis that should be making headlines. So if you work at a newspaper, write a blog, or choose content for other media, please consider reporting the real story here....