Why Portland Is Wrong About Water Fluoridation

When new medical treatments are implemented, when new drugs are introduced into the populace, there is always some hesitation. There are (hopefully) some clinical trials to back up the new intervention, but the long-term implications are often unclear. Water fluoridation doesn’t have this problem. For over 65 years, it has been rigorously tested as a public health measure, and considered one of the most successful measures of the last 100 years, alongside others like recognizing that tobacco use is a health hazard.

Simply put, the refusal of water fluoridation doesn’t have any scientific support. A review on fluoride’s effect on IQ out of Harvard was waved about as the main scientific opposition, but has since been thoroughly refuted

. Decades of studies in different cities in different states, involving millions of people, have concluded that there is a safe level of fluoride—one part-per-million—that can be added to water for enormous benefit to our teeth and oral health with little to no adverse effects. Without a study to stand on, the main opposition to water fluoridation seems to be political. It is almost understandable that Portland could stand up to health experts and refuse fluoride. Part of the American experiment was letting states decide for themselves what’s best for them and giving citizens the freedom to criticize government action. But the opponents of water fluoridation are boxing with a ghost. There are no known victims of water fluoridation. There are no cities receiving a toxic concentration of the ion. Water fluoridation isn’t just the addition of fluoride; it’s the regulation of fluoride in the water supply. The ion occurs naturally in ground water in varying levels, some that are in fact too high. When this is the case fluoride is actually removed from the water to get the greatest benefit. Arguing against having a regulated supply of fluoride in your water is like an anemic refusing to take iron supplements. The doctor isn’t trying to add enough iron to your blood so that Magneto could pull it out; she is trying make sure the levels in your blood are right for health. “Keep Portland Weirdly Out Of Touch With Modern Medicine” Portland is a lovely, if a little rainy, city replete with greenery, mountains, and some of the most interesting nightlife you will ever see. But chemophobia is in the air. Fluoride—an aggressively electronegative atom with an extra electron—has been singled out for scrutiny with a smear campaign. The charge against this negatively charged particle uses propaganda laced with a high concentration of fear-inducing terms and mischaracterizations to rally a small but highly vocal base. 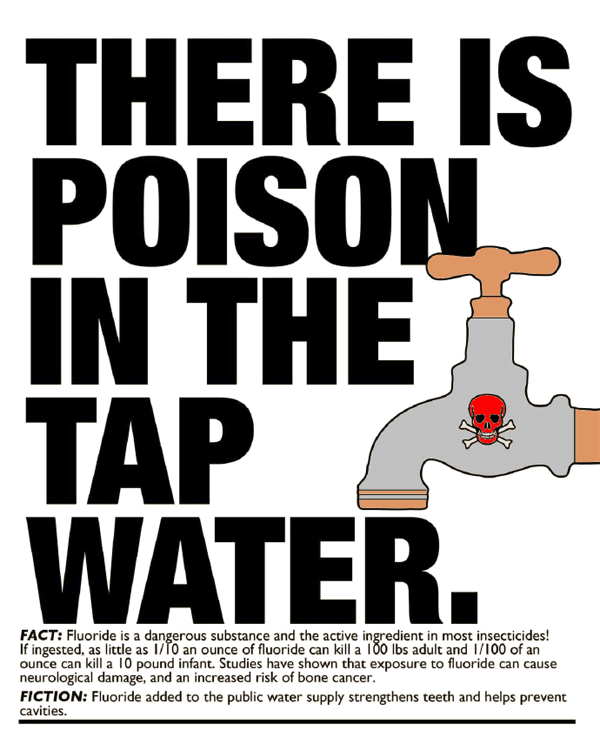 Because there is no evidence that a regulated amount of fluoride in our water is causing harm—the reality is just the opposite—graphic posters like this one on the right color the conversation. Poison? Insecticides? Bone cancer? Why would Portland fluoridate if this poster were right? But it isn’t. The fear of fluoride follows the same playbook for mischaracterizing chemicals. First, the chemical is labeled “toxic,” but it isn’t mentioned that everything is toxic in the appropriate amounts. Advil and Tylenol are toxic at high enough concentrations, as is water. Many chemicals are harmless within a range of toxicity, and many are beneficial up to certain point. Next, the chemical’s dangerous effects at massive concentrations are stated. But 1/100 or 1/10 of an ounce of fluoride would never be in a glass of tap water in a regulated area—indeed, you are much more likely to find dangerously high levels of fluoride in unregulated water supplies. One part-per-million is the recommended dose, and so one ion floats among a million water molecules. What happens at higher doses can be terrible, which is precisely why you won’t find those levels in regulated water supplies. The final effort is to link the chemical to other scary things that contain it. This may come as a surprise, but it shouldn’t scare you—your body produces formaldehyde. It does so naturally, but the chemical doesn’t damage or kill you. It’s all about the dose; it makes the poison. Just as a natural amount of formaldehyde in your body isn’t a cause for alarm, neither is a regulated, and proven beneficial, amount of fluoride in your water. And the fear is selective. Where is the anti-chlorine lobby? Chlorine is a chemical—also an ion—added to water, also considered one of the greatest public health measures in history. It too is proven to reduce disease and create a more healthy population. Chloride has all the attributes that make fluoride “scary.” When an identical situation produces almost no blowback, it speaks to the basis of fluoride fear. It’s not science. Posters and information campaigns like the one above have caused more damage to the reputation of chemicals than yesterday’s vote. The chemophobia playbook has tattered edges and frayed bindings. The game plan for destroying public support for a chemical is tired, disparaging, inaccurate, and it worked in Portland. Chemical Conspiracy “Portland is wrong about fluoridation” is exactly what a government shill would say, isn’t it? The claims against fluoride are overblown, the science deems it safe, so what’s left are the conspiracy theories claiming it to be a mind control agent or a dumbing-down recipe fed to the helpless sheeple. Though a conspiracy is nigh impossible to refute

Fluoridation conspiracy theorists can’t trust the government to safely add/remove something to/from their water—as they do for chlorine, cryptosporidium cysts, carbon-based solids, oil, grease, arsenic, lead, and selenium—but will give the government the benefit of the doubt when it comes to policing every shred of information on fluoridation for the last 65 years. As with most conspiracies, pulling on the thread unravels the theory. And if water fluoridation is a grand conspiracy, at least it’s a safe and cost-effective one. The CDC estimates

that every $1 invested in the practice saves approximately $38 in dental costs. The freedom to question the government that makes America great is a banner that shades our most cherished values. Sometimes, the shadow creeps too far. Should we have the freedom to refuse a critically important public health measure? When the enshrinement of autonomy bleeds into areas where personal opinion is the lowest form of evidence, it leads to perplexing questions about whether or not we have a right to be less healthy by choice. Portland has the right to keeps fluoride out of its water because the battle cry of American freedom trumps a data point on a graph. Even when surveys of 1^st-3^rd grader’s dental health recommend water fluoridation

, the issue is contorted and amplified into a political screech with unpleasant lows

and cringe-worthy highs. Portland remains out-of-step with dental health by choice, by political motivations, and by often-valid concerns over government intrusion. Yesterday’s vote was a failure of science communication, and it falls on public health officials to rectify that, to take back the word “chemical.” Perhaps re-framing the conversation in terms of dental health or water fluoridation as regulation, not just addition, could help. Until political questions are seriously informed by scientific answers, fear and freedom beats facts. Science can lead a man to fluoridated water, but it can’t make him drink. -- Image Credit:Panoramic X-ray