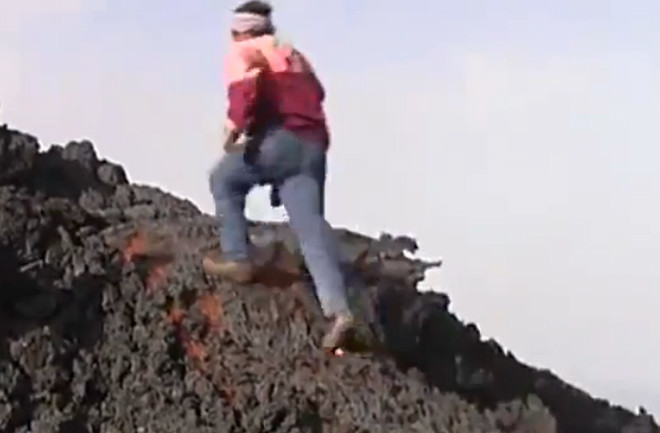 Walking on lava: not a great idea, but not as deadly as it seems. Image: video capture / YouTube. So, there has been some buzz about a video of a fellow "running up a lava flow." Now, normally I try to ignore videos of people doing things that are generally perceived as idiotic -- and running up a lava flow fits nicely into that category. However, upon watching the video, I realized that although he sure did run up the lava flow, it actually wasn't as crazy as it seems. DISCLAIMER: This isn't to say you should ever do what this guy did. Don't. There are many things you could do and survive but shouldn't because there are very high probabilities that you'll get hurt. This guy beat the odds. Anyway, here is the video: I've tackled the issue of someone falling into a lava lake before -- you wouldn't sink like Gollum in Return of the King, but you probably wouldn't like the experience much either as you explode from within when the water in your body turns to steam. I have even tackled how you might walk on lava (check it out -- I have changed my tune somewhat). The biggest thing most people don't realize is just how viscous lava is. It isn't like water, where if you step into a pool, you sink to the bottom because the water lacks any strength to hold you up. Lava does have strength and speaking from experience, lava, even when red hot, does offer a lot of resistance when you try to pull some out as a sample. The cooler lava gets, the more strength it gets as the silica tetrahedra that make up much of the lava bond into polymers or form minerals like olivine, pyroxene or plagioclase feldspar (amongst others). All of this increases the viscosity of the magma and gives it the ability to not yield when a force is applied. Taking a look at the video, the lava flow in question is moving pretty slow and has a dark crust on it. This means it is likely pretty cool -- in fact, it looks like it is a`a lava, which is even more viscous than the pahoehoe many people associate with lava flows. Crust forms quickly on lava flows because there is a high temperature gradient between the lava (at ~1000°C) and the air (~25ºC), so the lava hardens into a semi-flexible crust. Based on where the guys are standing, the lava flow isn't likely very large because the guy who doesn't run up the flow doesn't seem concerned to be standing only a few feet away. The flow itself looks confined to a small channel surrounded by solidified lava. My guess is that this little flow is fairly far from the vent (source). Now, I'm not sure why he chose this route to get up the ridge (well, beyond showing off), but if that flow has a decent crust (which it does) and is moving fairly slow (which it is), and if you move quickly, your weight isn't going to be enough to cause you to sink into the flow. The big caveat here is that if the crust is uneven and you hit a thinner part, you could find yourself with more lava on your boot that you'd like (that is, more than "no lava") or worse, trip and stick your hand on the flow surface that is still likely very hot when you fall. From the looks of the video, the guy took five, maybe six, steps on the flow and was back up on solid lava by the time he reached that next level and stopped. You might notice a small flash near his shoe at his last step (especially in the slow motion version) -- his shoe looks like it had started to combust briefly. Beyond this, you can tell that the flow is radiating a lot of heat because he moves off to the side quickly after making the sprint -- and trust me, after sampling lava at Kilauea, it is hard to describe just how hot it is near an active lava flow, even a small one.

Lava flows on Mt. Etna seen on February 21, 2013. Even from this vantage, the thickened crust on the lava flows is evident as the narrow flows move downslope. Image: Dr. Boris Behncke / Flickr. Apparently this video was taken by "lava artists" during some recent activity at Mt. Etna. Lava flows from Etna can travel far downslope in channels, forming thick crusts that could support a person -- as they did here. However, as we know, many eruptions at Etna are much more explosive in their character (at least at first) and lava flows tend to follow or occur simultaneously with these paroxysms. So, running up a lava flow is possible without much in the way of dire consequences if you (a) pick the right lava flow -- cool and slow; (b) you step lively and (c) get lucky. This hobby is up there with base jumping from tall buildings and surfing a volcano in terms of smart ways to spend your time, but really, lava flows are some of the least dangerous (to people) of the hazards from a volcano.