"Why Is The Sun So Hot?" Is a Real Question Scientists Still Have

Despite decades of high-quality observations, many details about our sun are still unknown. 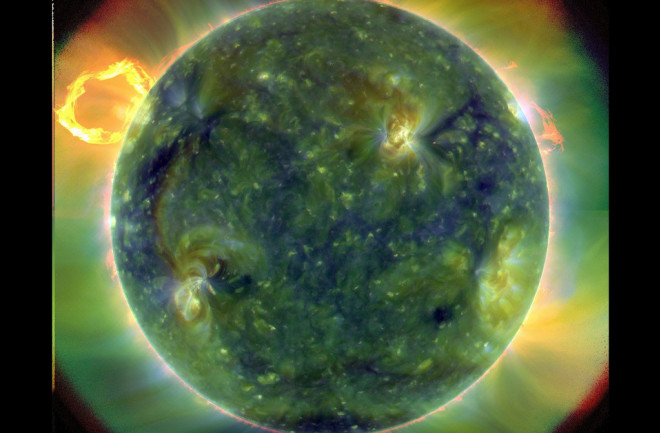 The fact that the sun is hot should not be news to a single person. The sun’s surface is about 10,000 degrees Fahrenheit, which seems toasty enough. But surrounding the sun is an atmosphere of sorts called the corona. This envelope of superheated gas — plasma, actually — measures more than 3 million degrees. And scientists are still trying to figure out how this outer layer is so much hotter than what lies beneath it.

The part that confuses scientists is quite simple: Since the sun’s heat source (which they do understand) is at its core, it should more or less cool as you move farther away from the center. But this isn’t what they observe. So, even with the sun right there, it’s not enough to explain how the corona is so much hotter than other layers. And before we move on, it’s probably a good reminder that heat is actually a measurement of how fast atoms are moving. So solar physicists are mostly looking for ways to accelerate this material, in a way that somehow happens only in the sizzling corona.

The sun’s corona appears during solar eclipse, when the rest of the sun is hidden from view. (Credit: NASA/Rami Daud)

Despite its heat, the corona is usually hidden from view thanks to the intense brightness of the rest of the sun. Even complex instruments have trouble studying it without being overwhelmed by light from across the sun’s surface. But that doesn’t mean its existence is a recent discovery. It appears in rare but predictable occurrences that have fascinated people for millennia: total solar eclipses.

In 1869, astronomers took advantage of just such an eclipse to spy on the sun’s suddenly visible outermost layer. They even pointed a spectrometer at the gauzy light in order to fingerprint the elusive material. They spotted an unfamiliar green line that appeared to be a totally new element: coronium. Seventy years later, scientists realized it was actually the familiar element iron, heated to never-before-seen millions of degrees. This is hundreds of times the measured temperature of the sun’s surface, and was immediately baffling.

An early theory posited that acoustic waves (imagine the sun’s material compressing and expanding like an accordion) could be responsible for agitating the corona in much the way a wave can hurl water droplets at high speed onto the shore. But solar probes haven’t been able to find such waves carrying enough power to explain the observed coronal heat.

So for almost 150 years, it’s remained one of those small but irritating mysteries of science: scientists are quite sure their temperature readings of both the surface and the corona are reasonably correct, and more certain about the basic physics that the farther you are from a heat source, like a campfire, the cooler the temperature should be. The facts are assured, but the explanation has proved elusive.

The sun emits powerful solar flares, captured here in a composite image from a year’s worth of observations. (Credit: NASA GSFC/SDO/S. Wiessinger)

Magnets: How Do They Work?

Part of the problem is that we don’t understand a lot of the small-scale happenings on the sun. We know it does its job of heating our planet, and we know generally how. But the scale of the materials and forces at work simply don’t exist in a more accessible laboratory, and getting close enough to the sun to study it in detail is difficult, to say the least.

The answer to most questions about the sun these days seem to boil down to some version of the sun being a very complicated magnet. The Earth also spins its own magnetic field. But the Earth, despite oceans and underground magma, is still much more solid than the sun, which is just a big ball of gas and plasma. So the Earth spins more or less like a solid object.

Not so the sun. The sun spins, but because it’s not solid, its poles and equator spin at different rates. The sun also bubbles material up and down through its layers, like a pot of boiling water. The effect is a tangled mess of magnetic field lines. The charged particles that make up the sun’s outer layers travel these lines like trains on highspeed railways. These lines snarl and reconnect, releasing massive amounts of energy (solar flares) or leaving twists full of charged particles free to fly off those rails into space at ludicrous speed (a coronal mass ejection). But it’s possible that underneath what we see, the sun is undergoing near-constant nanoflares — tiny flares spiking to tens of millions of degrees that cumulatively could give rise to the corona’s hellish temperatures.

A longer-standing explanation have been waves. Heat, after all, is just particles moving very quickly. The faster particles move, the hotter they are. So much the way an ocean wave can send water crashing to the beach at high speeds, scientists thought waves through the sun’s interior might fling the sun’s outermost layer out. But for decades now, scientists have been able to measure that acoustic waves(imagine vibrations travelling through the sun like sound waves travel through air) don’t carry enough energy to be the source. But the sun is full of many different kinds of waves, so other kinds are still on the table — including Alfvén waves, which travel specifically in plasma and along magnetic lines, just the environment solar physicists are most interested in.

We have many satellites already tracking the sun, but the Parker Solar Probe, launched this year, is just starting its observations. It will continue observing until 2025. Scientists hope that by getting the closest-ever view of the sun, it will answer these questions about nanoflares or Alfvén waves or, as some already suspect, an even more complicated combination of both mechanisms.