The complicated, confusing and thrilling search for alien life. 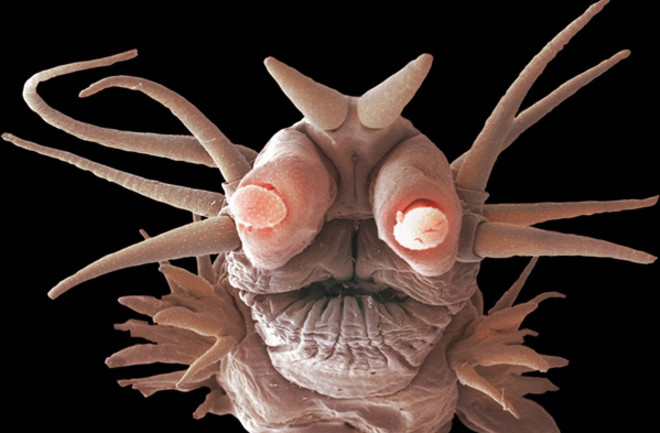 This alien-like creature is actually an ocean worm (Nereis sandersi) that lives near ocean-floor hydrothermal vents in the Atlantic. | Philippe Crassous/Science Source

In the movies, first contact with aliens unfolds with great drama. Often, extraterrestrials arrive with laser guns blazing; in more benevolent scenarios, they show up in the form of hooded Vulcans, glowing-fingered empaths or black-box artifacts buried on the moon. Regardless, the main message is clear: We are not alone in the universe.

In reality, the discovery of alien life will come with a lot of ambiguity and skepticism. How can I be so certain? Because it has already happened. Twice.

In 1976, the twin Viking 1 and Viking 2 landers touched down on Mars and initiated the most ambitious effort ever undertaken to seek life on another world. The robots scooped up soil and ran four experiments. In one of them, a sample was incubated in a nutrient broth. It immediately emitted a belch of a carbon-containing gas (most likely carbon dioxide), and for a staggering moment it looked like Viking had found an alien biosignature — chemical proof of biology in action.

Then came the gloomy realization that the chemicals of the Martian surface could produce the same effect without the aid of microbes. The other Viking experiments came up empty; NASA’s official verdict was “no evidence of life at either landing site.”

Gilbert Levin, the researcher who designed the belch test (technically the “Labeled Release experiment”), never accepted that conclusion. “Gil’s absolutely convinced that he discovered life on Mars,” says Paul Davies, head of Arizona State University’s Beyond: Center for Fundamental Concepts in Science, where Levin was an adjunct professor before retiring. “My feeling is that Viking is unfinished business. Everyone rushed to say, ‘Oh, well, that can’t be right.’ At the very least, you’d think that the experiment should be repeated.” Many other researchers now agree, especially in light of the recent finding that Martian soil contains chlorine compounds that could have obscured any organic material.

Almost two decades later, Mars starred in another alien-life drama. In August 1996, NASA convened an urgent news conference in Washington, D.C., where a team of scientists presented evidence of fossil microbes and biochemicals in an Antarctic meteorite originally from the Red Planet. President Clinton declared that the finding “speaks of the possibility of life.” Once more, an excited swoon rapidly gave way to widespread questions and critiques, even ridicule. And once more, the proponents did not back down. Astrobiologist David McKay of NASA’s Johnson Space Center went to his grave last year convinced that the meteorite contained traces of Martian bacteria.

Chastened by those two prominent misfires, life-minded scientists have stepped back from the Viking approach. “NASA dresses up its Mars missions with the word life all over, but they don’t actually go looking for life now; they’re looking to see whether the conditions might once have been conducive for life,” Davies says. The $2.5 billion Curiosity rover has demonstrated that warm streams once flowed on the Red Planet, for instance, but it is not equipped to find microbes, either living or dead.

Improving on Viking’s results will require bringing samples back to Earth, where researchers can analyze them in far sharper detail. That could happen sometime in the next decade. NASA is drawing up plans for the Mars 2020 rover, an updated version of Curiosity that would launch in (yep) 2020 and collect samples for eventual return. Russia and the European Space Agency are collaborating on a way to bring back bits of Mars soil sometime in the 2020s. And China’s official Xinhua news agency reports that the nation also wants to launch a similar mission before 2030.

Meanwhile, the number of potentially habitable locales in the solar system has grown. Now astrobiologists talk excitedly about at least two key destinations in addition to Mars: Jupiter’s moon-size satellite Europa and the much smaller Enceladus, which orbits Saturn.

Europa has a global ocean locked away beneath a crust of ice; deep below, the moon’s internal heat might create hospitable conditions, akin to hydrothermal vents at the bottom of the mid-Atlantic ridge and East Pacific Rise on Earth. Last December, the Hubble telescope found hints of water vapor venting from Europa’s surface, suggesting that the ice surface is thin and dynamic. That discovery electrified the team working on a proposed Europa Clipper mission designed to take a closer look — though, like Curiosity, the spacecraft would focus on studying the local environment, not on finding microbial E.T.

In some ways, Enceladus presents an easier case. This 500-kilometer-wide ice ball shoots out large geysers of ice crystals, which apparently originate from underground lakes near the satellite’s south pole.

Since the geysers are ejecting material from the lake up into space, a probe could simply take a few passes through the plumes, sweep up samples and fly them back home for study in terrestrial labs. Peter Tsou, a former NASA engineer who has drawn up a concept for such a mission, calls it the low-hanging fruit of sample-return-style alien-biology studies. As of this writing, however, it has no funding.

Studying creatures that live in extreme climates gives researchers insight into the sort of life that could survive below the icy surface of Europa, illustrated above. | NASA/ESA/K. Retherford/SWRI

Let’s be optimists for a moment and suppose that in the next decade Mars, Europa and Enceladus all get thoroughly tested for life. Hell, let’s be unrestrained, giddy dreamers and suppose that all three experiments come back with positive readings. Even then, the results may be frustratingly tentative.

If we find only fossil remains, the burden of proof will be almost overwhelming, as McKay and his colleagues learned the hard way. Complex organic compounds and things that look a lot like bacterial shapes form readily, without the hand of biology. Even if we recover a cache of living alien microbes, that won’t necessarily settle the issue. Terrestrial germs can easily sneak into a lab sample and contaminate it. Worse, asteroid impacts could have produced a more fundamental type of contamination, tossing bacteria-infested rocks from planet to planet billions of years ago.

As a result, the real-world version of first contact may fail to answer the deepest question: Is Earth an anomaly, or is it part of a huge community of living worlds? “We’re still completely in the dark about what transformed non-life into life,” Davies says, “and if we don’t know what the process is, we can’t estimate the odds.”

Fortunately, there is a way to investigate that question here and now, without the expense and excruciating schedule of a space mission. “If it’s the case that life emerges readily in Earth-like conditions, then, surely it should have started many times over right here on Earth,” Davies says. Maybe some local aliens still live among us, and we just haven’t recognized them yet. Finding the spawn of a second genesis would be a revelation. Any process that can happen twice can probably happen a million times, or a billion, in locations throughout the cosmos.

To single out life-as-we-don’t-know-it, Davies suggests looking for microbes that thrive at extreme temperatures or depths. One particularly telling result would be finding organisms that use mirror-image versions of the familiar biomolecules, making their metabolism incompatible with that of any known living thing. “I think that would be open and shut,” he says.

This kind of backyard search is the perfect project for an era of shrinking budgets but expanding insights. “Back in the ’60s, when I was a student interested in life beyond Earth, I might as well have professed an interest in looking for fairies. Now, most scientists have the preconception that life’s out there all over the place,” Davies reflects. “Can we test that? It doesn’t require too much effort. It just requires people to be open-minded.”

[This article originally appeared in print as "Why is E.T. MIA?"]