Why Has the Sun Developed a Huge Hole? 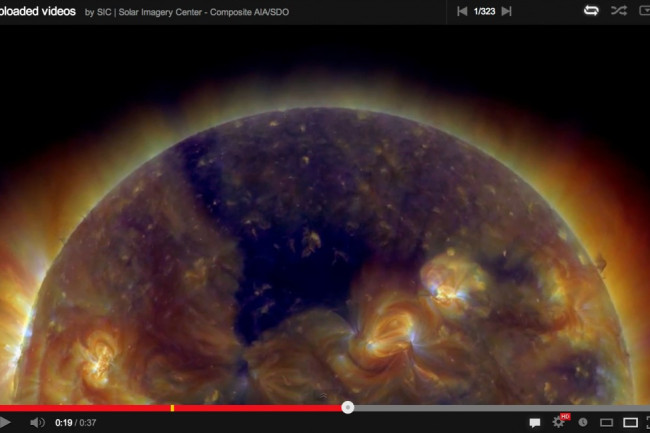 A hole in the sun's corona, or outer atmosphere, is visible in this screenshot from an animation of images from NASA's SOHO spacecraft. It's the roughly triangular dark region in the image, which emphasizes light in the ultraviolet part of the electromagnetic spectrum. Click on the image to watch the animation. (Source: NASA/SOHO) |See updates below | In case you haven't heard about it, a huge chunk portion of the sun's corona has indeed gone missing. But even if you have heard about this so-called "coronal hole," click on the screenshot above. It'll take you to a new animation of the phenomenon posted to the web today by NASA. It's really dramatic. | Update 7/31/13: After posting this piece, I had second thoughts about my use of the word "chunk" in the original headline (which read "Why is a Huge Chunk of the Sun Missing") and in the first paragraph. A huge portion of the sun's corona, or outer atmosphere, has indeed gone missing. (See the explanation below.) But the word "chunk" implies that a really thick piece of the sun is gone. That's not true. So I've changed the headline and the first paragraph to reflect this. | The animation consists of images sent back to Earth by NASA's Solar & Heliospheric Observatory spacecraft, or SOHO. The large, roughly triangular dark area is the coronal hole. The animation above dates to July 16th. Click here to see another animation, covering July 20-22. Corey Powell, who writes the awesome "Out There" blog here at Discover, was interviewed about the phenomenon today on the Fox News program America's Newsroom. Check out the interview in its entirety here. Corey's money quote:

You'll notice that part of the sun is missing . . . This part that's missing, the reason it's dark, is that whole chunk of the sun basically ripped off, blew out and is coming our way at about 2 million miles an hour.

Some explanation: The sun can develop a coronal hole when a portion of its magnetic field fails to loop back onto the surface, as it usually does. This allows more solar material to escape into space. In other words, it makes the solar wind even windier. That's the stuff that's flying out into space. The region looks dark because there's simply less hot and bright solar material left behind. Corey was quick to point out that formation of coronal holes isn't unusual. But to be sure, this one is larger than most. Measured from one side to the other, the hole is about 80 times as wide as the Earth. "So this is an incredible chunk of the Sun that's flying out," he said. Earth is shielded from the material in the solar wind by it's magnetic field. But when solar material hits the field, it can jostle it in a way that causes disruption to satellites, power lines and industrial equipment. And sometimes that disruption can be pretty severe. Not to worry. I checked the forecast from the Space Weather Prediction Center from today (July 30), and nothing terribly dramatic appears to be in store, at least for the next few days:

The geomagnetic field is expected to be at quiet levels on days one and two (31 Jul, 01 Aug) and quiet to unsettled levels on day three (02 Aug).