Why Habitable Exoplanets Are Bad News for Humanity's Future

Kepler-186f is the first planet almost exactly the same size as Earth orbiting in the “habitable zone.” 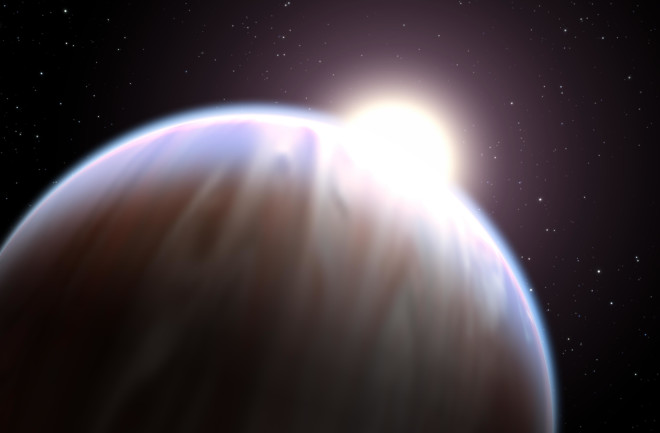 Last week, scientists announced the discovery of Kepler-186f, a planet 492 light years away in the Cygnus constellation. Kepler-186f is special because it marks the first planet almost exactly the same size as Earth orbiting in the “habitable zone” — the distance from a star in which we might expect liquid water, and perhaps life.

What did not make the news, however, is that this discovery also slightly increases how much credence we give to the possibility of near-term human extinction. This because of a concept known as the Great Filter.

The Great Filter is an argument that attempts to resolve the Fermi Paradox: why have we not found aliens, despite the existence of hundreds of billions of solar systems in our galactic neighborhood in which life might evolve? As the namesake physicist Enrico Fermi noted, it seems rather extraordinary that not a single extraterrestrial signal or engineering project has been detected (UFO conspiracy theorists notwithstanding).

This apparent absence of thriving extraterrestrial civilizations suggests that at least one of the steps from humble planet to interstellar civilization is exceedingly unlikely. The absence could be caused because either intelligent life is extremely rare or intelligent life has a tendency to go extinct. This bottleneck for the emergence of alien civilizations from any one of the many billions of planets is referred to as the Great Filter.

What exactly is causing this bottleneck has been the subject of debate for more than 50 years. Explanations could include a paucity of Earth-like planets or self-replicating molecules. Other possibilities could be an improbable jump from simple prokaryotic life (cells without specialized parts) to more complex eukaryotic life — after all, this transition took well over a billion years on Earth.

Proponents of this “Rare Earth” hypothesis also argue that the evolution of complex life requires an exceedingly large number of perfect conditions. In addition to Earth being in the habitable zone of the sun, our star must be far enough away from the galactic centre to avoid destructive radiation, our gas giants must be massive enough to sweep asteroids from Earth’s trajectory, and our unusually large moon stabilizes the axial tilt that gives us different seasons.

These are just a few prerequisites for complex life. The emergence of symbolic language, tools and intelligence could require other such “perfect conditions” as well.

Or Is the Filter Ahead of Us?

While emergence of intelligent life could be rare, the silence could also be the result of intelligent life emerging frequently but subsequently failing to survive for long. Might every sufficiently advanced civilization stumble across a suicidal technology or unsustainable trajectory? We know that a Great Filter prevents the emergence of prosperous interstellar civilizations, but we don’t know whether or not it lies in humanity’s past or awaits us in the future.

For 200,000 years humanity has survived supervolcanoes, asteroid impacts, and naturally occurring pandemics. But our track record of survival is limited to just a few decades in the presence of nuclear weaponry. And we have no track record at all of surviving many of the radically novel technologies that are likely to arrive this century.

Esteemed scientists such as Astronomer Royal Martin Rees at the Cambridge Center for the Study of Existential Risk point to advances in biotechnology as being potentially catastrophic. Others such as Stephen Hawking, Max Tegmark and Stuart Russell, also with the Cambridge Center, have expressed serious concern about the exotic but understudied possibility of machine superintelligence.

When the Fermi Paradox was initially proposed, it was thought that planets themselves were rare. Since then, however, the tools of astronomy have revealed the existence of hundreds of exoplanets. That just seems to be the tip of the iceberg.

But each new discovery of an Earth-like planet in the habitable zone, such as Kepler-186f, makes it less plausible that there are simply no planets aside from Earth that might support life. The Great Filter is thus more likely to be lurking in the path between habitable planet and flourishing civilization.

If Kepler-186f is teeming with intelligent life, then that would be really bad news for humanity. For that fact would push back the Great Filter’s position further into the technological stages of a civilization’s development. We might then expect that catastrophe awaits both our extraterrestrial companions and ourselves.

In the case of Kepler-186f, we still have many reasons to think intelligent life might not emerge. The atmosphere might be too thin to prevent freezing, or the planet might be tidally locked, causing a relatively static environment. Discovery of these hostile conditions should be cause for celebration. As philosopher Nick Bostrom once said:

The silence of the night sky is golden … in the search for extraterrestrial life, no news is good news. It promises a potentially great future for humanity.

Andrew Snyder-Beattie works at the Future of Humanity Institute at the University of Oxford. This article was originally published on The Conversation.