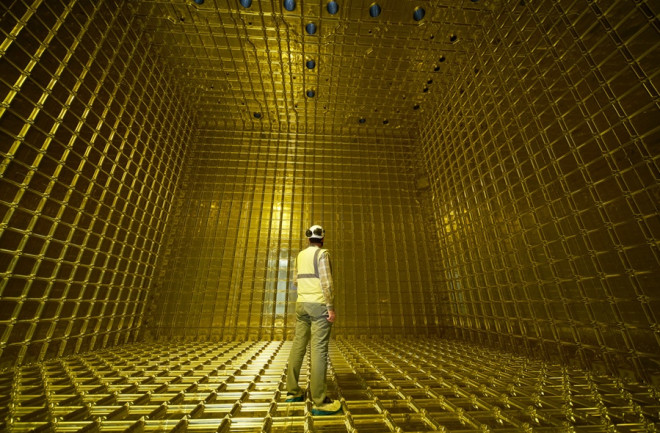 Seventy-thousand tons of liquid argon, trillions of particles moving at nearly the speed of light, an abandoned mine-turned-lab a mile underground, over 1,000 scientists and more than a billion dollars — all to catch what optimistic calculations suggest will be a single particle each day.

It’s a staggering amount of effort, but a search for some of the most elusive particles in the universe may just be worth it.

The objects in question are neutrinos, often called ghost particles. They’re far more present than the nickname suggests, though. Trillions pass through you every second — you just never notice. They’re so lightweight, their odds of interacting with other particles are enormously slim; it takes extraordinarily sensitive equipment to even detect them.

But that evasiveness makes neutrinos a tempting quarry for physicists.

“There are more neutrinos in the universe than there are protons or neutrons, or anything like that, by a factor of about a billion,” says Deborah Harris, a physicist who studies neutrinos at Fermilab, just west of Chicago. “If your goal as a field is to understand the universe, you need to understand neutrinos.”

To that end, Fermilab, along with the Sanford Underground Research Facility in South Dakota, is starting a new project called the Deep Underground Neutrino Experiment, or DUNE. The goal is to track and study the shadowy particles like never before.

Currently set to begin in 2026, the experiment will be an important step forward for researchers studying neutrinos. It starts with a new particle accelerator, still in development at Fermilab. The complex machines are a crucial tool for physicists studying the universe’s smallest bits of matter, allowing them to examine the particles in a controlled environment. Inside, a series of electromagnetic fields will accelerate individual protons up to nearly the speed of light. Then, still underneath Fermilab’s grounds, the protons will ram into a block of graphite, producing a shower of particles. As these particles decay, a stream of neutrinos is produced. A sensor will gather data on that stream before it shoots off, traveling through Earth’s crust, toward South Dakota, 800 miles away.

There, buried deep underground at the defunct Homestake Mine, will be four warehouse-sized tanks filled with supercooled liquid argon. The hope is that some of the neutrinos made at Fermilab will strike the nucleus of an argon atom, releasing a burst of light and a cascade of electrons that scientists can track.

“Neutrino physics, so far, has been basically more a sort of counting experiment,” says Angela Fava, a neutrino physicist at Fermilab. “You’re classifying interactions and counting how many you have.” But DUNE, she says, will let them begin to tell these interactions apart.

Of particular interest will be monitoring a peculiar trait of neutrinos: They change type, or flavor, as they travel. For example, the neutrinos made at Fermilab, nearly all of which will be of a flavor called muon, could arrive in South Dakota as muon neutrinos, or either of the two other flavors, tau or electron neutrinos.

By comparing the departing and arriving flavors and other data, the researchers hope to glean further insights into how the particles behave as they move through space. Most tantalizing would be hints of a potential fourth kind of neutrino, the “sterile neutrino” — so-called because, if it’s real, it doesn’t seem to ever interact with matter. But if there are subtle disparities in the type of particles observed at the near and far detectors, those might hint at the sterile neutrino’s existence. Such a neutrino would be a candidate for dark matter, an invisible substance physicists are all but certain pervades our universe, yet have never detected.

Answers to such questions will have to wait until DUNE comes online, however, and challenges remain. Some are practical, like the fact that the particle accelerator is still in development, and others are simply logistical. For instance, transporting 70,000 tons of argon — which needs to stay cool in transit in order to remain in its liquid state — to South Dakota and then underground is a task never before attempted. While the researchers are confident they’ll figure it out, it won’t be easy. But that’s only fitting: When looking for ghosts, things rarely are.

[This article originally appeared in print as "Fermilab's Ghost Hunt."]