Why Do Bird Eggs Come in So Many Shapes? 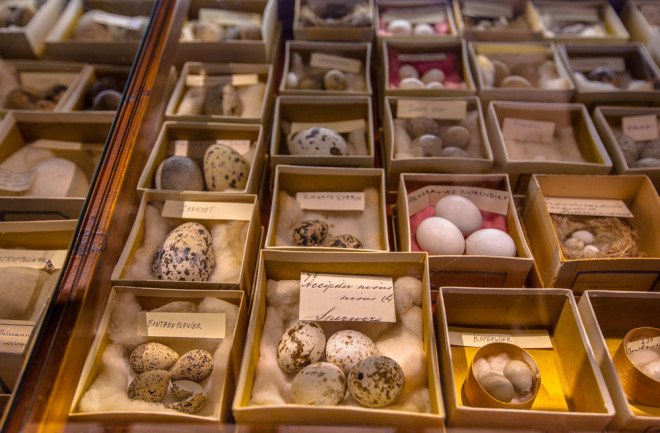 Various bird eggs on display at Natura Docet Wonderryck Twente in The Netherlands. (Rudmer Zwerver/Shutterstock) When something is described as egg-shaped, the ubiquitous hen’s egg typically comes to mind. But for birds, eggs come in myriad shapes: owl eggs look like ping-pong balls, hummingbird eggs are shaped like jelly beans, swift eggs are pointed at one end like a pear. So what's the reason? Biologists have been asking that question for quite some time, and their hypotheses are perhaps just as varied as the eggs themselves. Scientists in the past have concluded that cliff-dwelling birds lay conical eggs that roll in tight circles, so as to not fall out of the nest. Egg shape could make incubation more efficient. Even Aristotle weighed in on the egg conundrum, asserting—among many assertions—that long, pointed eggs are female while more rounded eggs are male. But for biologist Mary Caswell Stoddard of Princeton University, the answer might be more simple: egg shape is determined by flight ability. "We find that good fliers, birds that seem to be adapted for strong powerful flight, tend to lay more asymmetric or more elliptical eggs, and this came as quite a shock to us," Stoddard wrote in their study, published Thursday in the journal Science. To arrive at this conclusion, her team examined more than 49,000 eggs from 1,400 different bird species and classified them by shape. Then, in addition to a trove of biometric data, they turned to museum specimens to calculate birds' hand-wing index (HWI), a method used gauge flight ability. They then constructed a family tree of 1,000 bird species, and found that different groups of birds appeared to have characteristic egg shapes, and HWI was the thread that tied them together. The common murre spends a lot of time in the air, and its eggs are elongated like teardrops. An ostrich, on the other hand, sticks to the ground and its eggs are more oval-shaped. Adept fliers possess aerodynamic, compact bodies, so they may have evolved to lay streamlined eggs that can fit through their narrow pelvises, Stoddard posits in the paper. It’s a rather intuitive conclusion that ties a neat bow on a question that’s stuck around for centuries. Rather than linking egg shape to its function in the nest, Stoddard’s team looked to the bird.