Initially a cosmic curiosity, the night sky was eventually decoded by ancient peoples, making astronomy one of (if not the) oldest science. 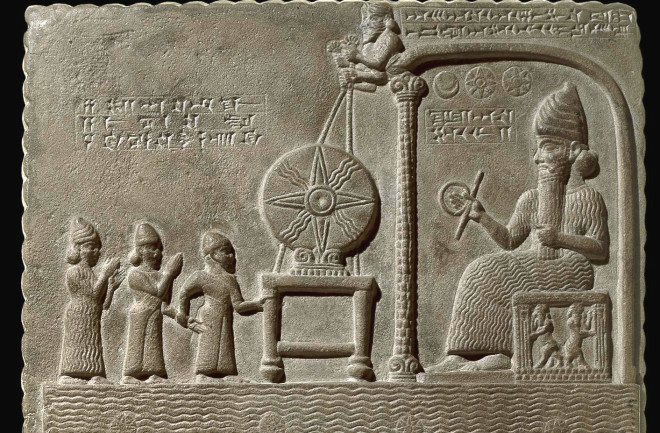 This roughly 2,800-year old Babylonian tablet shows priests at the shrine of the Sun-Temple at Sippar, home to a sun-worshiping cult. In the field above the Sun God, you can see the sun and moon, as well as an eight-pointed star, each a symbol of an ancient deity. Below their feet is the "heavenly ocean." (Credit: The Trustees of the British Museum)

Millions of years ago, ancient humans living on the African savanna likely gazed up in wonderment at the bright moon and star-filled sky. This cosmic backdrop wasn't too different from the one we see today; but how they interacted with it almost assuredly was. It wasn’t until humans came to view the stars as tools that we became masters at understanding their movements.

By some 7,000 years ago, a group of nomadic people living on the African savanna became the first-known humans to record the motions of the stars at a site called Nabta Playa. This cattle-worshiping cult of hunters and gatherers built the world’s oldest stone circle to track the arrival of the summer solstice, as well as the seasonal monsoons they depended on for water and food.

"This was the dawn of observational astronomy," J. McKim Malville, a professor emeritus at the University of Colorado and archaeoastronomy expert, told Astronomy earlier this year.

It would be millennia before such rigorous observations were applied to other fields like biology, chemistry, geology, medicine and more.

The Origins of Astronomy

Thousands of years after the construction of Nabta Playa, similar moments would play out all around the world. Our species was evolving from stargazers to scientists.

Sure, ancient humans still projected their myths and gods into the heavens. But they also meticulously recorded observations and noted changes, then tied those changes to the behavior of the natural world. This allowed them to predict vital aspects of the future, like when the rains would come or when it was time to harvest a crop.

As time went on, civilizations around the world came to increasingly rely on those who could interpret the motions of the night sky. The world needed astronomers.

This ancient Babylonian cuneiform tablet describes a surprisingly modern method to track the path of Jupiter. Babylonian astronomers plotted a 60-day portion of Jupiter’s wandering path across the sky on a graph, with time plotted on one axis and how many degrees Jupiter’s path shifted each day on the other. The figure on the resulting graph described looks like a trapezoid, and the area of that trapezoid is the total amount Jupiter moved over 60 days. (Credit: Trustees of the British Museum/Mathieu Ossendrijver)

How the Stars Got Their Names

The history of Western astronomy was born in Mesopotamia. Here, astronomy appeared alongside the dawn of agriculture in the so-called Fertile Crescent, a thin sliver of the Middle East historically thought to be the birthplace of both farming and writing. As ancient civilizations exploded in Sumer, Assyria, and Babylon, so did the study of the stars.

And while modern Europeans may have adopted the constellations used by the Greeks, those constellations were already ancient in the days of Aristotle. So, in fact, we can track the origins of today’s constellations back all the way to Babylon.

The Babylonian people had an interesting tradition of star maps. They kept two separate sets of constellations for wholly different purposes. One set was used to track farming dates and mark ancient celebrations. But another was devoted to recognizing the gods. It was this god-marking set that ultimately made its way to the Greeks, forming the foundations of our modern 12 constellations of the zodiac.

The Babylonians didn’t only draw pictures of the sky, either. They etched them into rock. By 3,200 years ago, they had carved the first known catalog of stars into stone tablets.

Yet, the titles given to some of those stars seem to have even older origins, apparently coming from the Sumerian people. This implies that formal knowledge of the stars stretches back to before recorded history.

These developments weren’t unique to the West, either. Similar histories played out on different timelines in varied cultures across the world. And that’s why many historians consider astronomy to be the oldest science.