Why Astronomers Are Riveted By the Search for Nothing 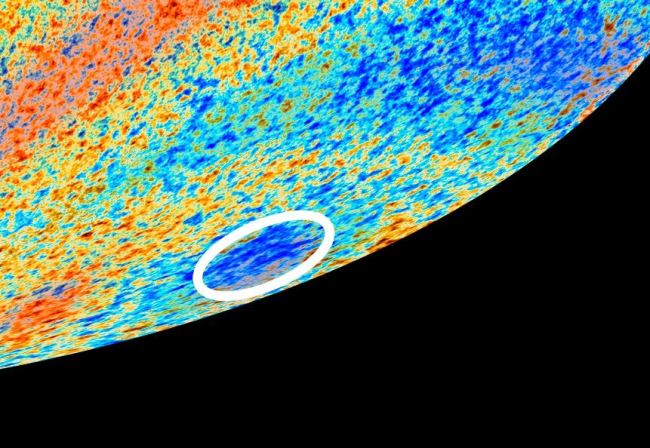 Astronomers have found evidence of a giant void that could be the largest known structure in the universe. The “supervoid” solves a controversial cosmic puzzle: it explains the origin of a large and anomalously cold region of the sky. However, future observations are needed to confirm the discovery and determine whether the void is unique. The so-called cold spot can be seen in maps of the Cosmic Microwave Background (CMB), which is the radiation left over from the birth of the universe. It was first discovered by NASA’s Wilkinson Microwave Anisotropy Probe (WMAP) in 2004 and confirmed by ESA’s Planck Satellite. For more than a decade, astronomers have failed to explain its existence. But there has been no shortage of suggestions, with unproven and controversial theories being put forward including imprints of parallel universes, called the multiverse theory, and exotic physics in the early universe. Now an international team of astronomers led by Istvan Szapudi of the Institute for Astronomy at The University of Hawaii at Manoa have found evidence for one of the theories: a supervoid, in which the density of galaxies is much lower than usual in the known universe.

To understand the effect of a void, imagine the universe is like a Swiss cheese, with holes – voids – corresponding to empty spaces devoid of matter and gravitational pull. When a photon, a particle of light, from the CMB encounters a void it will lose energy but regain it as it exits. However, since we believe that the universe is constantly expanding, the photon will exit into a medium that is less dense than before it entered the void. Lower density means weaker gravitational pull on the emerging photon. This means that the photon cannot make up all the energy it lost and ends up with a little less energy – and hence lower temperature – than light from regions on the sky that did not pass through the void. This process explains why the spot is 70 μK colder than the surrounding chilly CMB radiation, which is 2.7 K in whichever direction one looks on the sky. Tiny fluctuations imprinted by processes in the early universe do exist in this remarkably even temperature distribution, but they typically only differ by 18μK. 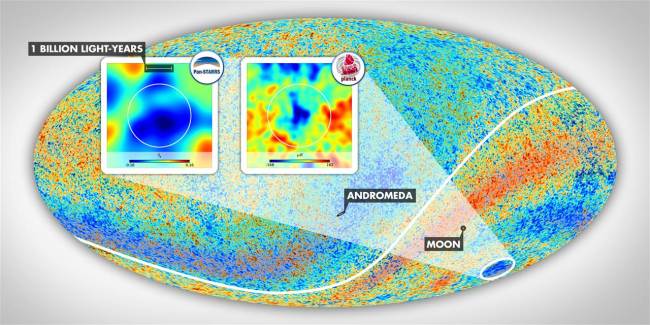 The cold spot in the cosmic microwave background radiation, which is a snapshot of the light from the big bang, that researchers have failed to explain for over a decade. Credit: ESA Planck Collaboration But it isn’t the first time researchers have claimed to find a supervoid that explains the cold spot. In 2007, radio astronomers announced they had found a low density region when they counted the number of radio sources towards the direction of the cold spot but competing studies at visible wavelengths appeared to dispute their findings. Other studies searched for voids at particular distance – or redshifts – towards the direction of the cold spot but found no convincing evidence of any deficit in galaxy counts. To count the galaxies closer to home and check for the existence of a nearby void required a significant increase in the area of the sky astronomers could survey. This capability came with new catalogs of objects identified in wide-field all-sky surveys.

Istvan and his team used two sets of data by matching objects discovered at infrared wavelengths by NASA’s Wide Field Survey Explorer (WISE) with colors in visible light measured by the robotic telescope Pan-STARRS1 to make a tomographic map of the distribution of galaxies in the cold spot. A dip in the numbers of galaxies in the center of the cold spot signaled the presence of the largest known structure in the universe – a supervoid stretching 1.8 billion light years across the sky when universe was 11.1 billion years old – which is relatively recent on cosmic timescales. This is an exciting result – but the study is complex, with a number of errors that can creep in due to various assumptions. Understanding the density of the universe on near and far sides of the void is more challenging than one might expect and the simple assumption of a single, giant void is – as the authors point out – likely to be naive. More detailed maps of the supervoid will help determine whether it has substructure within it.

But future observations mapping different regions of the sky will also check how rare the void is. The chance of an accidental alignment between the cold spot and the supervoid seems small, but not impossible. The race is therefore on to find other voids in order to confirm the supervoid’s relationship with the cold spot. The team already have plans to use the Dark Energy Camera -– which recently shed new light on dark matter – to investigate another candidate void near the constellation Draco. Ultimately, understanding the nature of voids and cold spots might require modifications to our favorite cosmological models or perhaps even models of gravity itself. The discovery is exciting not just for cosmologists, but also for technologists. In the future, new facilities – such as the Large Synoptic Survey Telescope – will survey the whole sky every few nights for a decade. Mining the torrent of data that will allow astronomers to search for large-scale structures such as voids and clusters and to make discoveries of new explosive or time-variable objects such as supernovae and gamma ray bursts. Combining these approaches in a new era of data-driven discovery may open new, exciting windows on our universe.