Why Are There Deadly Rockfalls at Yosemite? 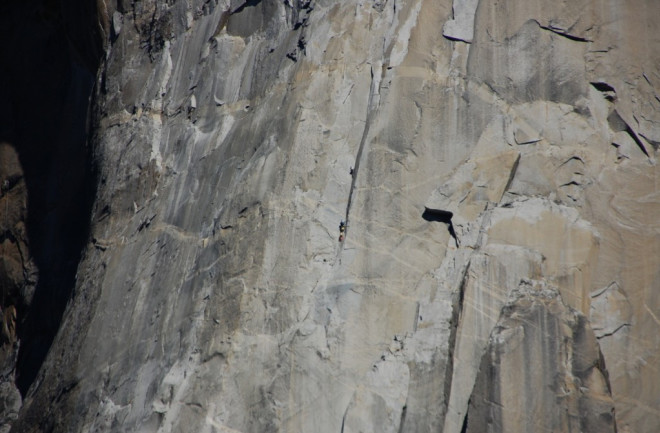 Climbers on the shear granite face of El Capitan in Yosemite National Park. You can see areas where fresh (white) rock is exposed that likely experienced a recent rockfall. Image: Erik Klemetti, September 2012. The last few weeks have seen multiple rockfalls at Yosemite National Park in California, one of which produced a fatality to a climber on the iconic vertical wall. Yesterday, another rockfall that was ten times bigger than the fatal one earlier in the month occurred that injured a park visitor. So, why are these rock falls so common in Yosemite Valley? It all comes down to the fact that steep rock walls are not as permanent as they might seem.

#BREAKING: Another rock fall near #ElCapitan in @YosemiteNPS. My photographer and I witnessed the whole ordeal, it was so loud, thunderous. pic.twitter.com/6J3xmieMet

Most of Yosemite Valley is lined with the remnants of magma bodies. El Capitan and Half-Dome are chunks of granite (or related rocks) that crystallized deep underground

-- likely over 3 kilometers down -- during a time when a chain of volcanoes ran down the proto-California coastline. The solidified remains of the magma bodies that drove that volcanism are the beautiful granite that makes the valley so stunning. However, that granite isn't stable

. Well, let me qualify that. Granite

is stable -- the Sierra Nevada itself is testament to that strength of the rock. However, granite doesn't like being at the surface. It was formed under high pressure underground and processes like weathering, erosion and uplift bring that rock to the surface over millions of years. That granite encounters conditions very different than where it formed once it gets to where we can see it: the pressure is thousands of times lower, the temperature is hundreds of degrees cooler and there is all this stuff that keeps happening to it: rain! wind! animals! plants! frost! snow! boulders! It is an unpleasant place to be for granite. So when the glaciers came through and carved Yosemite Valley, leaving these barren, steep slopes of granite, they also left an inherently unstable situation. Granite will naturally begin to split

as it is exposed to the low pressure of the Earth's surface. That makes cracks in the rocks. Water or animals or plants roots get into those cracks and can help expand them. That water can work on destroying the rock multiple ways. Mixtures of water and natural acids can dissolve the minerals, making the rock weaker (geologists might call it "rotten"). Water can also get into cracks and freeze ... and when it freezes, it expands, widening the cracks. Eventually, that slab of rock isn't attached to the rest of the granite and gravity can take over, causing it to fall. Maybe an earthquake or big rainstorm or the sun beating down on the rock causing it to expand and contract every day can help the process along. Then you get a rockfall, leaving new rock exposed (see below) to start the process all over again.

The whole Yosemite Valley is at high hazard for these rockfalls, especially underneath the stark cliffs. Without any vegetation to protect the rocks, the granite can be exposed to all the nastiness of the Earth's surface and eventually, those slabs will fall away. You can see an NPS video on rockfalls here

. Unfortunately, it is really hard to predict

exactly when that might happen. There are some ways we can start to make models of the places with the highest likelihood (a "hazard map

"): carefully mapping the the cliffs, measurements of cracks in the rock walls using LIDAR or gauges, GPS measurements of parts of the cliffs, video surveillance looking for the start of falls. However, the only real way to be safe is to try to stay away from places of danger. Which, of course, is a big problem for pesky humans

. Climbers love the challenge of the sheer cliffs at Yosemite

. Cabins sit at the bottom of these gorgeous geologic features. People want to be there even in the face of the potential that thousands of tons of rocks may come tumbling down on them while they climb or sleep. You can see in the photo of yesterday's rockfall that the area that the climber passed literally fell away. If you are under that, you are likely out of luck. Maybe if you are far enough away to hear/see the rockfall begin, you can get out of the way, but once they start, they move fast and are carrying potentially millions of cubic feet of rock

#BREAKING Reports of a second rockslide near El Capitan in Yosemite. No word yet on whether anyone was hurt in this slide. (Ryan Sheridan) pic.twitter.com/YrVg98u72J — Fox26 News (@KMPHFOX26) September 28, 2017

in Yosemite and produced hazard maps, showing where rockfalls have happened and where the highest likelihood of falls

might be in the park. They can happen in all seasons

, although early spring and late winter, with there abundant water, tends to have more rockfalls. The NPS has worked to reduce the usage of some places

that have a higher occurrence of rockfalls so that we don't have a large tragedy such as a rockfall heading through cabins full of visitors at night. There really isn't any way that rockfalls can be prevented at Yosemite National Park -- they are part of the geologic process where rocks are destroyed at the Earth's surface, only to be reburied as part of the rock cycle. The best way to prevent deaths or in juries is to be knowledgable of the hazard and try to avoid putting yourself into harms' way. Now, not everyone is going to follow the advice of geologists and park officials to play it safe, but that is where society has to step in and decide how much value we want to put on keeping people safe.