Who Owns the Rocks? 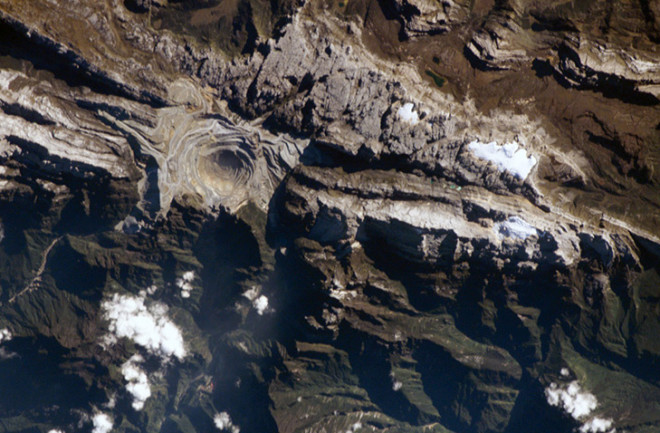 The Grasburg Mine in Indonesia. The pit itself is 4-km and sits near the top of Puncak Jaya. Small glaciers can be seen to the right of the mine. NASA Earth Observatory. Who owns the land beneath your feet? That might seem like a simple question, but what about the stuff beneath the surface? The rocks and minerals ... and resources? Who owns those items of potential value and who gets the profits if that resource is exploited? These questions have existed for centuries and are still being bitterly fought around the globe as certain resources become more scarce and new resources are sought. What "worked" in the 1800s doesn't work in the 21st century and it could have some major repercussions for how we access the mineral resources we need. An article in Bloomberg News recently detailed how many large mineral, metal and petroleum deposits around the world are no longer controlled by large multinational corporations. Instead, the countries that host these deposits are taking back control so they can reap the profits of the subsurface. Just this past week, Freeport-McMoRan, a company based out of Phoenix, agreed to divest in its mining properties in Indonesia, allowing for 51% control by local concerns (PT Freeport Indonesia) ... and by "agree", I mean they were leaned on heavily by the Indonesian government to allow for more local control of mining and profits from mining. Freeport still operates and is "in charge" of the Grasburg mine in Papau that is the top gold and third highest copper producing mine in the world. The mine also produces significant silver, so you might understand why control over the mine is so important when so much value is locked in the rocks of Puncak Jaya. Acacia (part of Barrick Gold), a gold mining firm working on deposits in Tanzania, is in a bitter conflict with the Tanzanian government over payment for the rights to work gold deposits. The government contends that Acacia owes taxes worth at least $190,000,000,000 (four times the GDP of the country!) over gold exports and has now banned the export of unprocessed gold ore. This means that Acacia is stuck with ore and no real way to get the gold out. In response, they have started to limit their production in the country. However, it goes beyond that. The mine (and many large mines) have a legacy of environmental damage. The Grasburg mine itself likely plays a role in the destruction of a rare equatorial glacier that exists on Puncak Jaya. More importantly, when you mine for metals like copper, gold and silver, this isn't like what you might imagine with gold nuggets. These metals are likely disseminated in the rocks so that tonnes of material has to be extracted, crushed and processed to produce grams of metal. All that waste has to go somewhere and that somewhere is usually the land around the mine. This creates what are called "tailings" piles that can

have side effects like producing acid mine drainage, where rain water causes sulfuric acid to be produced as it reacts with the leftovers, or damage to watersheds as sediment is carried downslope in rivers.

In many cases, these large mines have local workers but many foreign managers, so relations between the labor and management can become intense. This is doubly so when it is perceived that the local people are being ignored and exploited by a large international company. This might lead to strikes or violence -- and this violence can go back and forth between local citizens and security hired by mining firms. In many places, mining has occurred since long before the arrival of foreign companies, so balancing local miners with big money firms is challenging. In attempts to have more say in how the mines are operated and bring more money to the local or national economy, countries will want a larger stake in the mines themselves. This can go as far as nationalizing a segment of the mining industry like what happened with oil in Mexico (Pemex) and copper in Chile (Codelco). However, such nationalization is rare these days -- instead, governments work to build partnerships with companies to make sure they get their fair share of what they consider the wealth of the nation. In the case of Freeport and Indonesia, that is exactly what happened. Indonesia had the resource, Freeport had the expertise ... and you can guess which is worth more. Indonesia agreed to extend Freeport's lease on Grasburg from 2021 to 2041 and the local branch of the company got a majority stake in the mine. This doesn't come without consequence. Recently, Indonesia also took control of some important gas and oil fields and put the national petroleum firm Pertamina in charge of the field. However, there is now concern that Pertamina doesn't have the expertise or resources to fully exploit those fields. They have now started to reach out to international firms to help shore up the ability to extract the oil and gas, but this is difficult to do when local control is paramount in the current political climate. Countries want their cut of the mineral wealth hiding beneath their feet. However, it can be challenging to take over and exploit such resources without the help of international corporations -- especially before the right expertise has been developed in a country. Sometimes it works, like Codelco in Chile. Sometimes it doesn't, as shown by what is happening in Indonesia with gas and oil. Mineral resources are the lifeblood of many countries, so determining who controls that wealth will be challenging as countries look to protect their resources.