A new preprint called “A systematic bias in DTI findings” could prove worrying for many neuroscientists. In the article, authors Farshid Sepehrband and colleagues of the University of Southern California argue that commonly-used measures of the brain’s white matter integrity may be flawed.

The technique in question, diffusion tensor imaging (DTI), uses an MRI scanner to measure the diffusion of water molecules at different points in the brain. In white matter, water diffusion is constrained by the nerve fibres (myelinated axons) which run in particular directions. So by measuring the tendency to diffuse in some directions more than others (‘fractional anisotropy’), we can infer how many (healthy) axons are in a certain location.

The problem, according to Sepehrband et al., comes from the perivascular space (PVS) – fluid-filled areas surrounding the blood vessels in the brain. Depending on the size of the PVS and the resolution of the DTI scan, water within a PVS could appear to be either directionless or directional, the authors say, and can introduce an insidious bias into studies of white matter.

Given the relatively fast diffusivity of the water expected in PVS, even a small portion of PVS in an imaging voxel can have a substantial effect on the voxel averaged DTI measures

Sepehrband et al. illustrate this concern with simulations and analysis of real DTI data. Their key result is that commonly-used DTI measures are contaminated with PVS bias, and that ‘free water estimation’ (FWE), a popular method intended to prevent contamination of DTI, is not enough to prevent this.

However, all is not lost, because the preprint also introduces a new data analysis method called tissue tensor imaging (TTI) which, the authors say, is able to estimate and correct for the PVS signal. 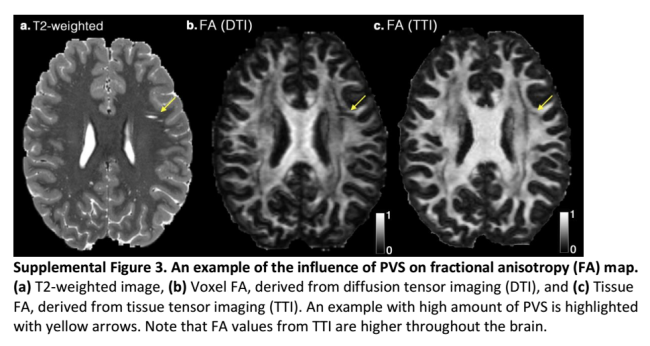 The bad news is that some DTI findings fail to replicate with TTI. For instance, in the well-known ADNI Alzheimer’s disease dataset, DTI shows that older people who suffer cognitive impairment have lower white-matter integrity in many regions compared to cognitively healthy people. This is typically interpreted as meaning that white matter damage or degeneration has occured in these individuals.

Yet when Sepehrband et al.’s re-analysed the same data using TTI, they found no differences between cognitively impaired and cognitively healthy people, although the impaired group did show increased PVS volume. This suggests that it is actually the PVS, not the white matter, that shows changes in these cognitively impaired cases. (Although the sample size of these analyses was quite small, with 17 cognitively normal and 16 impaired.)

Overall, the authors conclude that they have discovered a problem for diffusion MRI, although they are hopeful that study of the PVS may provide new insights in future:

We show that unincorporated anisotropic free water in perivascular space (PVS) significantly, and systematically, biases DTI measures, casting new light on the biological validity of many previously reported findings. Despite the challenge this poses for interpreting these past results, our findings suggest a new opportunity for incorporating the PVS contribution into diffusion MRI metrics of tissue changes, ultimately strengthening the clinical and scientific value of diffusion MRI.

This article is still a preprint meaning that it hasn’t been peer-reviewed. However, it seems to me that it raises a significant issue and it’ll be interesting to see how other experts in the field react to these claims.