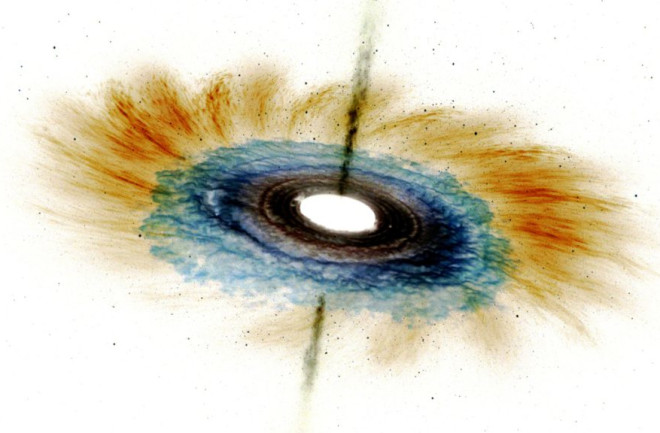 It was no less a luminary than Isaac Newton who taught us that for every action, there is an equal and opposite reaction. Push on the wall, and it pushes back. With that in mind, cosmic “white holes” make a lot of sense — they seem inevitable, even.

We all know about black holes, those cosmic vacuum cleaners that suck in anything (including light) that gets too close. Well, what about the opposite? Might the vast unending cosmos also feature white holes, which emit matter and energy into the void, but could never be entered?

It’s appealing to our sense that things often come in binaries — if there’s an off switch, there’s probably an on switch somewhere. And white holes also feel like a necessary balance to the finality of black holes: Where does all that sucked-up stuff go?

Unfortunately, whether or not white holes truly exist remains an open question. But that hasn’t stopped researchers from thinking about what they’d be like if they do exist. Some theories suggest they might even be necessary to solve some longstanding problems, from the nature of dark matter to the nature of the universe itself.

As with all things cosmic and “hole”-y, white holes trace their origins to Albert Einstein’s general theory of relativity. Some solutions of the theory’s complex equations produce black holes and, it turns out, other solutions produce white holes. The two are, mathematically at least, equally likely to exist.

Further, black holes and white holes are as intertwined as the names suggest. NASA astrophysicists have referred to the latter as “the time-inverse of black holes.” Reverse the film footage of a black hole, in other words, and you’ll get a white hole — and vice versa.

Great, but what does that actually mean? Some interpretations are fairly literal. White holes may simply be the opposite end of black holes, connected by theoretical tunnels of space-time called (of course) wormholes. So the matter and energy falling into a black hole would eventually beam out of a white hole, somewhere in this or another universe.

But don’t go rushing into a black hole just yet, hoping for a free vacation to a distant land: The crushing gravity would ensure that only a mangled and broken down version of you and your luggage would make it out the white hole on the other side.

Another interpretation of what they could look like in real life came in 2014, when researchers suggested white holes might arise from the corpses of black holes. Current thinking says that black holes emit radiation and slowly evaporate, getting tinier and tinier until they just pop out of existence. But, it now seems, certain conceptions of the universe say that might be impossible. Just as light and matter are quantized — they come in discrete bundles of packets that can’t be divided — so, too, might space-time itself come in distinct chunks.

If that’s true, then a black hole could only shrink until hitting that natural limit. That’s when it would rebound outward in a “quantum bounce,” turning the shrinking black hole into an expanding white hole. It sounds fantastical, but the math apparently checks out.

This idea could solve a number of problems plaguing physics. First, the black hole information paradox would be almost trivially resolved. Put simply, the paradox states that the information entering black holes would disappear completely along with the death of a black hole, as it evaporated into nothing. But information is supposed to be inviolate, and can never be completely destroyed. Quantum bounces would solve that problem neatly: All the information stored within a black hole would simply be spewed out when it becomes a white hole.

White holes might also help explain the identity of dark matter, another recurring headache among theorists. The problem here is that something is holding together parts of the universe, even though nothing is visibly doing so. The current explanation calls that invisible stuff dark matter, a mysterious substance that doesn’t react with light or any other known force of nature except gravity. No one knows just what dark matter might be, even though it seems to make up about 84 percent of all the matter in the universe. But a 2018 paper suggested that white holes — hard to detect, and made of a mysterious kind of matter — might just make up a big chunk, if not all, of the dark stuff.

Birth of a Cosmos

One final interpretation of white holes to end the discussion on. “You can think of the Big Bang as the ultimate white hole,” said astrophysicist Ezequiel Treister in a 2011 NASA chat.

It’s not as crazy as it sounds. The mathematics is largely similar for talking about a white hole’s emissions and the Big Bang’s creations. Both events are fundamentally inscrutable, too. It’s famously difficult even thinking about what transpired before the Big Bang and what caused it. And mirroring our solid understanding of how black holes are born, white holes have fundamentally murky origins: Einstein’s equations describe how white holes can exist, but not how they can form.

The parallels are enough for many researchers to suggest the Big Bang and white holes are one and the same. “By definition,” Treister continued, “a white hole cannot be created, so the only way to have it is if the universe ‘comes’ with one.” That is, maybe we and the rest of the universe are part of what a 13.8-billion-year-old white whole spewed outward. Maybe that’s the only kind of white hole our universe allows: the one that spawned it.

But, for any or all of these interpretations to be true, we’d need proof that white holes exist in the first place, and we don’t have any. It’s just one more way they’re the mirror image of black holes, which are well documented and almost certainly occur throughout the universe.

“White holes are speculative and there’s no reason to think they exist,” said astrophysicist Kevin Schawinski in the same chat as Treister.

As with so many other absurd objects, just because they could exist doesn’t mean they do. But that doesn’t mean white holes aren’t worth thinking about.