Where Will We Live After Earth? 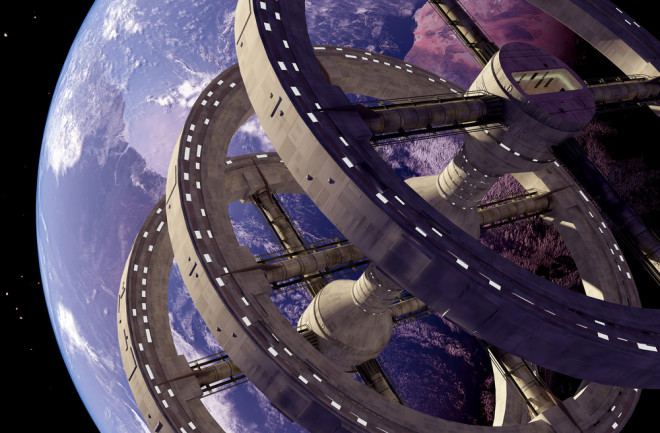 This article originally appeared on The Conversation.

Some climatologists argue it may be too late to reverse climate change, and it’s just a matter of time before the Earth becomes uninhabitable – if hundreds of years from now. The recent movie Interstellar raised the notion that we may one day have to escape a dying planet. As astrophysicists and avid science fiction fans, we naturally find the prospect of interstellar colonization intriguing and exciting. But is it practical, or even possible? Or is there a better solution?

Science fiction has painted a certain picture of space travel in popular culture. Drawing on stories of exploration from an age of tall ships, with a good helping of anachronisms and fantastical science, space exploration is often depicted in a romantic style: a crew of human travelers in high-tech ships wandering the galaxy, making discoveries and reporting back home. Perhaps they even find habitable words, some teeming with life (typically humans with different-colored skin), and they trade, colonize, conquer or are conquered. Pretty much, they do as humans have always done since the dawn of their time on Earth.

How closely do these ideas resemble what we may be able to achieve in the next few hundred years? The laws of physics and the principles of engineering will go a long way to helping us answer this question.

As Fast As We Can

Nature has given us a speed limit. We call it the speed of light – about 186,000 miles per second – because we first noticed this phenomenon by studying the properties of light, but it is a hard upper limit on all relative speeds. So, if it takes light one year to get somewhere, we can’t possibly get there sooner than one year.

The vast distances between solar systems combined with the speed-of-light limit puts severe constraints on the realities of space travel. Every space-based science fiction writer has to decide early on how to deal with this white elephant standing proudly in the room. Much of the more recent science fiction employs some form of “worm hole” or “warping space:” bending the four-dimensional structure of space and time to create shortcuts between two spatial locations in the universe.

Such possibilities have been analyzed with some mathematical rigor, and although the studies are tantalizing, they show that these methods cannot work unless we discover a form of matter that behaves very differently than anything we have ever seen.

Practical space propulsion systems available today and for the foreseeable future are based on Newton’s laws. In order to move forward, we have to throw something backwards or get hit by something moving forward. It turns out that even using the best propulsion systems available, there is not enough mass in the entire universe to propel even a single human being up to half the speed of light. Even relative speeds of 0.01% of the speed of light start to get prohibitively expensive.

Things look slightly better with advanced propulsion concepts such as thermonuclear propulsion, but optimistic near-future designs still top out at a few percent of the speed of light.

Large distances combined with low speeds means that exploration is going to take time. Astrobiologists tell us that our galaxy has no shortage of habitable worlds: estimates range from at least 1 every 10,000 stars to as many as 1 every 10 stars. Even so, given the vast distances between stars and the low speeds achievable by realistic spacecraft, you should plan on voyages between worlds taking centuries to millennia.

Consider also what is meant by a “habitable world.” To an astrobiologist, this means a planet with water oceans orbiting a sun-like star. But habitability by humansrequires more than just water, and the chances that ordinary humans could simply step out and populate such a world is slim. The atmosphere and living ecosystem of Earth is the result of its own unique evolutionary history, one that is unlikely to occur coincidentally on any other planet.

Kepler-186f was the first Earth-sized planet discovered in the habitable zone. Credit: NASA

Kepler-186f was the first Earth-sized planet discovered in the habitable zone. Credit: NASA

Despite its current problems, the Earth is still far closer to the ideal that our species grew up in than any world we are likely to discover out in the galaxy. Climatologists warn us of the devastation that could result from increasing the carbon dioxide in our atmosphere by less than a tenth of a percent. Compared to that, another living world, with its own unique ecology, would most likely have an environment that is unbreathable and infertile at best, lethally toxic at worst.

Terraforming, or modifying such a world to be habitable to humans, would require reconstructing its atmosphere and biosphere practically from scratch, eradicating any native ecosystem. This would be a task orders of magnitude more challenging than the relatively minor tweaks needed to restore the Earth’s environment to a pristine state.

Perhaps a more fundamental question, then, is why humans would wish to colonize other worlds. Given the centuries-long treks between stars, interstellar voyagers would necessarily have moved beyond the need for a planet to support their lifestyle: their vessels would be their habitat, autonomous and self-sufficient. They would not have to seek out new homes, they would build them.

From an economic standpoint, this would be vastly more resource-efficient than converting entire planets. NASA-sponsored researchers have developed detailed plans for spinning habitats that could accommodate tens or hundreds of thousands of inhabitants, from material that could be mined on site from an asteroid a few hundred meters across. This type of construction would avoid one of the major expenses of space colonization: the cost of lifting millions of tons of building materials into space.

Since our Solar system contains millions of such asteroids, they could support a population many times that of Earth, in air-conditioned comfort, with a fraction of the effort and none of the exotic technologies envisioned to terraform Mars, for example.

Do We Need to Visit the Stars?

Ultimately, travel to other stars and colonization of other planets will be driven not by need, but by desire: the intellectual impulse to explore strange new worlds, and perhaps an aesthetic preference for “natural” (albeit engineered) environments.

NASA studied the asteroid Eros up close more than a decade ago. Credit: NASA

NASA studied the asteroid Eros up close more than a decade ago. Credit: NASA

Already the lure of asteroid resources has fueled commercial competition. A single kilometer-sized metallic asteroid could supply hundreds of times the total known worldwide reserves of nickel, gold and other valuable metals. Space-based solar power could provide limitless renewable energy – once the cost of construction in space becomes manageable.

The hyper-exponential growth that we have seen in other areas like automobiles and computers can now take place for space technology. The physical realities described above paint a very clear picture of the near future: orbital habitats perfectly designed for our lifestyle using resources obtained from our sun, Earth, and the asteroids.

So if Earth ever become uninhabitable, we won’t need to traverse the stars to find a new home. Orbital habitats will require a significant expansion of space industry, but this will happen soon enough, especially if we are forced to leave the planet for a little while so it can recover from our mistreatment.

Of course, if we discover warp drive, the picture will be entirely different.