Where The Universe's Missing Matter Hides

After decades of coming up short, scientists have finally discovered it hiding in plain sight. 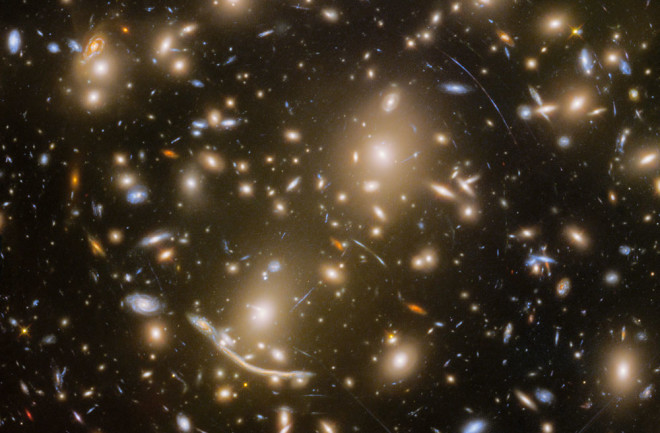 When Colin Hill found himself bored on winter break from Princeton University in late 2013, he decided to search through old cosmology papers. (Grad students are fun like that.) He saw one that sparked an idea: Now that telescopes are so sensitive, could we learn anything new about missing matter by comparing the latest maps of galaxies with traditional records of the universe’s oldest light?

Over the next few days, Hill worked through a quick analysis. It looked like he might be on to something. He returned to campus in January and sat down with his thesis adviser, David Spergel, and others to dig deeper on this map comparison. After finishing up — and triple-checking every step — they could do something no one had done before: reliably account for all of the normal matter in the universe.

It’s a surprisingly big deal. This normal matter, the types of particles that make up you and me and everything astronomers can see in the universe, seemed to be evading detection. The mystery of this missing stuff officially began in the early 1990s when scientists first tallied up all the stars, hot gas, cold dust and everything else they knew about. The total amounted to only a fraction of all the normal matter that the universe should have created during its first few minutes, based on other, super-solid observations using both the oldest cosmic light and nuclear physics equations. (Dark matter is its own mystery, and it involves totally different stuff.)

Over the next two decades, as telescopes became more sensitive, astronomers would make some progress hunting that unseen normal matter they knew had to be there. But the numbers still weren’t adding up.

“There’s a huge disconnect,” says Argonne National Laboratory cosmologist Lindsey Bleem. “We’re missing about 30 percent of the [normal matter] we know should be there when we do this accounting.”

And the fact that astronomers couldn’t find it was disconcerting. After all, telescopes can see every form of light, from radio waves all the way up to high-energy gamma rays. Regular matter shouldn’t be able to hide.

Unfortunately, those telescopes have their limits. Some can make out only cold dust, some only hot gas; if the target is too diffuse, stretched out across vast distances, it won’t show up in some detectors. To find that missing matter, then, you need an equal-opportunity approach, one that can see all material no matter its temperature or density. Luckily, the universe provides one.

It all goes back to the oldest light in the cosmos. It’s been traveling through our expanding universe since 380,000 years after the Big Bang. Today, it saturates the modern sky in microwave light. Embedded in this cosmic microwave background (CMB) radiation are hints aplenty about the universe in its infancy.

But the all-sky maps that chart the CMB also contain details of everything the light passed on its way to our telescopes. The gravitational pull from massive clumps of matter can yank on the light’s path, and the hot gas floating between galaxies in clusters can donate a bit of energy to the light. Moving gas can also impart some of its own momentum to the light particles passing through as microwaves, literally shoving around the CMB.

The CMB, combined with sky maps from future telescopes like the LSST (pictured), will map the universe’s matter with unprecedented precision. (Credit: LSST Project/NSF/AURA)

Rashid Sunyaev and Yakov Zel’dovich hypothesized this action in the 1970s, but it hid from astronomers’ detectors until 2012. Because it’s synonymous with movement, the momentum transfer is called the kinematic Sunyaev Zel’dovich, or kSZ, effect — and that’s what Hill’s team used to unveil the universe’s normal matter.

It’s not easy to find, but researchers are just barely able to detect the kSZ effect today by correlating two separate datasets: their CMB maps of choice and the newly precise maps of galaxy structures. When combined, these allow astronomers to see the exact locations of the moving gases that give the CMB light particles a kick. Hill’s team looked for the strength of that kick, because from that they can figure out how much matter is out there. However, determining that strength depends on two things: the velocity and amount of gas doing the kicking within the galaxy.

Once cosmologists have the kSZ signal, they can finally determine how much matter is out there — as long as they also know its velocity. Normally that’s no problem, as astronomers can study a galaxy’s light to learn how far away it is and how fast it’s moving. But that type of measurement is time-intensive and expensive, and Hill’s team wanted to look at a lot more — ultimately 46 million galaxies.

So they created a computer model based on scientists’ standard understanding of the universe — things like how old it is, how much dark matter it holds and how powerful gravity is. And from that model, they could estimate, statistically, the velocities of the galaxies across the entire sky. All the pieces fell into place.

The Cosmic Microwave Background. (Credit: ESA and the Planck Collaboration)

Their technique worked, and they published last year in Physical Review Letters. "According to the measurement we made, all of the [normal matter] is accounted for in the present-day universe,” Hill says. The kSZ signals, while faint, revealed the long-missing matter had been there all along, too diffuse to make out. Now researchers could finally see it.

But tallying that normal matter was just the beginning. “I was both relieved and excited with the results,” says Hill, now at Columbia University. “But what’s more exciting is to think about what we’re going to be doing in the next couple years.”

The next decade will include more advanced CMB telescopes and galaxy sky surveys. The Large Synoptic Survey Telescope (LSST), for example, will photograph all of the southern skies from its Chilean ridge in a matter of days, compiling information on 20 billion galaxies over 10 years.

Those observations will lead to refined maps of the universe’s normal material. “We’ll be applying [this technique] to these much bigger samples and measure how the gas distribution is changing as the universe evolves,” says Hill’s adviser and co-author Spergel.

That information can start to reveal details of cosmic structure. How exactly is matter distributed throughout a given galaxy? How much material do high-energy objects, like exploding stars or ravenous black holes, toss out of their galaxy’s gravitational grip?

“We’re hoping that by using these types of measurements over the next few years, we’ll probe precisely how this gas is getting moved around by these very dramatic processes,” says Hill. “That’s the next frontier.”

Liz Kruesi, a freelance science writer, ponders the mysteries of the universe from Austin, Texas. This article originally appeared in print as "Missing Matter Found."