When you've been stung more than 1,000 times, it's only sensible to write a book about stinging insects. 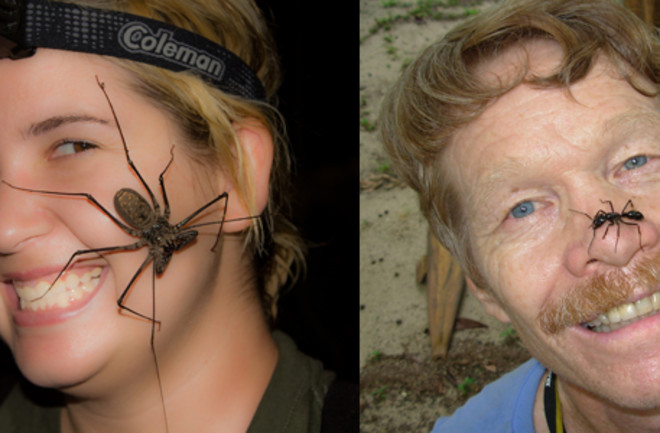 Schmidt and I have very different definitions of "gentle giant". You can tell a lot about an book by the author's photo. My author photo for Venomous, for example, paints me as the intrepid explorer; I look adventurous and daring as I smile unabashedly through the legs of a large tailless whip scorpion (amblypygid). But while the photo is startling, it's not as bold as it seems. It's a facade of bravado, not real bravery, as the menacing-looking animal on my cheek is actually harmless. Meanwhile, in his author photo for Sting of the Wild, Justin Schmidt shows that he's far more daring: on his nose crawls a large Dinoponera ant. Schmidt probably would laugh at my assessment of the image; after all, he refers to the Dinoponera, the largest ants on Earth, as the "gentle giants of the ant world." But I went with a non-stinging amblypigid rather than an ant for a reason. According to Schmidt's own colorful and cheeky index detailing the pain of insect stings, the ant crawling across his face possesses "A pulsing sting with some flavor." Sure, it only scores a 1.5 out of 4.0 on his pain scale—but that's 1.5 more painful than any species I would place on my snout.

It's a photo befitting the book of a man who has been stung by more than 1000 times by some 80+ different species. As an entomologist who studies the Hymenoptera—bees, wasps and ants—Schmidt has a lifetime of experiences to draw upon for Sting of the Wild, his first book, which which hit shelves May 15th. In the book, Schmidt teaches the fundamental science of stinging insects, including the evolutionary impetus for pain induction. But, of course, the book doesn't just focus on the scientific details; is also tells the stories of some of those many stings, taking the reader along with Schmidt as he travels the world in search of species that most of us would run away from. If you're interested in bugs of any kind, and especially the notorious ones, this book will entertain, educate, and excite. The book also contains the complete Schmidt Sting Index, published in its entirety for the first time, which rates the pain of stings from 83 different species on a four-point scale. Schmidt adds a personal description for each sting; the 'gentle giant' on his nose, for example, burns as if "You stepped into a salt bath with an open wound." Meanwhile, the most painful insect in the world, the bullet ant, has the highest pain score on the list ("In fact, if I made a 5 on the scale, it would be just the bullet ant and nothing else," Schmidt told

magazine). It's sting is "Pure, intense, brilliant pain. Like walking over flaming charcoal with a 3-inch nail embedded in your heel."

What? It's only a 2.0 out of 4.0 on the pain scale, says Schmidt. "Burning, corrosive, but you can handle it. A flaming match head lands on your arm and is quenched first with lye and then with sulfuric acid." Photo by Justin Schmidt Having experienced select few of the insects on the scale for myself, I can't speak to the accuracy of Schmidt's entertaining index. But his descriptions of the stings—befitting a sommelier more than a scientist—almost make me want to try a few stings for myself. Almost.