When the Lights First Turned on in the Universe 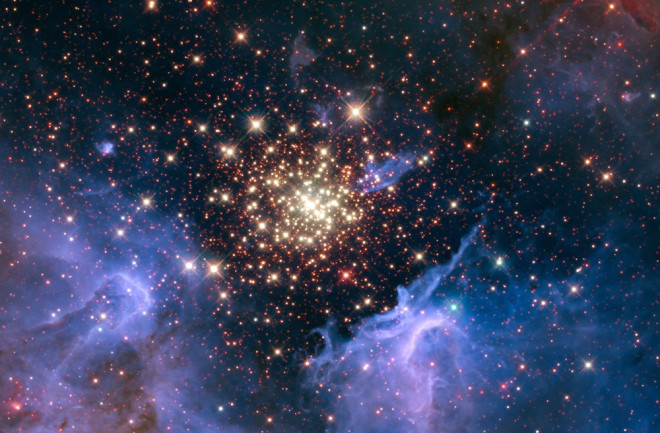 The universe in its infancy wasn't the bright place we know today. (Credit: NASA/ESA)

The Big Bang, as many cosmologists like to point out, was not very banging. Nothing exploded. But that doesn’t mean it wasn’t a busy and exciting event. The rush of inflation was a powerful outpouring of energy, which certainly included light. And yet, the energy contained in that early universe was such that light couldn’t even escape. For light to be seen, by telescopes or eyes of any species, it needs to be able to travel from its source to the observer.

But the universe when it first existed was too clogged by excited particles for light to get through. Imagine the infant universe as the first pinball wizard, batting photons back and forth and around, never letting them simply fall to stream freely away into space. The paddles and levers in this case were dense seas of electrons, clogging up the cosmos by constantly absorbing and re-emitting light in random directions, keeping the cosmos in the dark.

The universe in its infancy wasn’t the well-ordered system it is today. These days, matter clumps. Yes, into stars and asteroids, but also into much smaller units like molecules and even neutral atoms; the familiar model of a positive nucleus surrounded by orbiting electrons.

When the universe first formed however, this hierarchy didn’t yet exist. Electrons and protons flowed freely in a particle soup jostling with spare energy. It took the cosmos something like a quarter to a half million years to calm down enough for protons and electrons to pair up. Cosmologists call this era recombination, but there’s nothing “re-” about it. It was the first time ever that elementary particles joined up to form atoms.

Once they did, the pinball game stopped, and light was allowed to stream freely through the universe, which finally consisted of the empty space so prevalent today. But there was only one light present in those days: the crackle of energy from the Big Bang, already ancient but only then allowed to travel for the first time. The universe had just managed to stick together enough to form atoms, and shining stars were still eons away.

And so, after the Big Bang’s brilliance faded the universe went dark again, for something like 400 million years.

The first stars would have been giant, brilliant objects. (Credit: NASA/WMAP Science Team)

The universe had a lot of settling to do. Astrophysicists will tell you that cold gas is the key to making stars, and so it’s been since the beginning. And the Big Bang was nothing if not hot. The material it made took millennia to settle down just enough to form the simplest atoms, a single proton and electron joining forces to form hydrogen. To calm down enough for those atoms to stick together, for gravity to take hold and start collapsing clouds of hydrogen gas, took much longer.

But eventually, the same processes began that reign today: atoms cooled and stopped madly churning under their own heat. Clumps formed, and then gravity took over and pulled more matter in. In those days, hydrogen and helium were very nearly the only game in town. The early universe was made of something like 75% hydrogen, 25% helium, and traces of lithium and beryllium (that is, elements one through four, for those of you looking at a table of the elements). This is talking by mass. If you want the numbers of atoms, it’s even more lopsided, because hydrogen is lighter than helium. Counting atoms instead of grams, the ratio is more like 92% hydrogen and 8% helium, with again just traces of other elements.

This means that the earliest stars were very pure. What’s more, only these elements, drifting around in gas form, existed at all. Larger molecules like the dust that now litters our cosmos hadn’t had time to accumulate. This makes it harder for clouds of gas to cool. That means that when hydrogen did form clumps, it took truly massive clouds to condense enough to form stars. The first stars, therefore, were leviathans. Scientists disagree about exactly how big they were. But conservative estimates put them at about 30, and much more likely 300 times the mass of our sun. More extreme estimates range up to 1,000 solar masses.

The first stars would have exploded at the end of their lifetimes, much like Cassiopeia A in our more modern universe. (Credit: NASA/CXC/SAO)

Leaving a Mark on the Universe

Stars like these would burn hotter than a star like our sun, and that in turn would unleash powerful amounts of ultraviolet radiation. When scientists look for this first generation of stars (confusingly called Population III stars), that fingerprint of brilliant UV light on the star’s surroundings is what they look for. Some even purport to have found it, at only 190 million years post-Big Bang, half the age of the universe that scientists expected.

So the universe birthed enormous stars, which burned through their nearly-pure hydrogen fuel quickly, in only a few million years. Physics only requires about 100 solar masses before a star is destined to end its life as a supernova. So these behemoths definitely exploded, unleashing a slew of heavy elements into the cosmos, polluting it and changing the composition of the universe forever more.

These massive stars and the black holes they created attracted more stars around them, and the first galaxies began to emerge. Stars of all sizes were born in new stellar nurseries. And the universe as we know it now finally began to appear.