When It Comes to Giant Eruptions, Buoyancy Is the Key 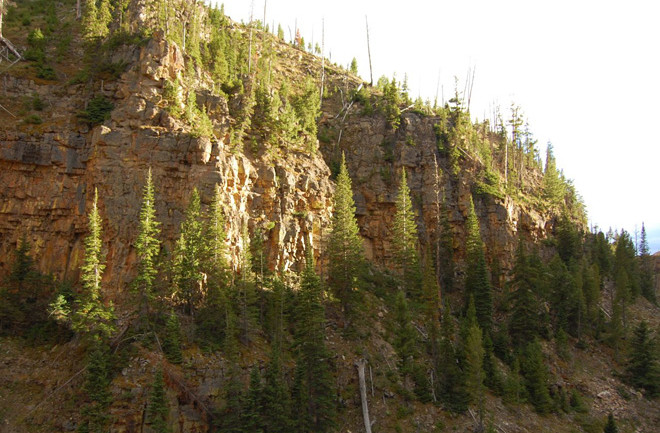 Cliffs of rhyolite in the Yellowstone Caldera. What triggered these eruptions? Image: Erik Klemetti One of the most daunting questions in volcanology today is what exactly triggers different volcanic eruptions. The problem is twofold: (1) eruptions are triggered deep underground (a few to tens of kilometers) in magmatic systems and (2) there may be no single trigger, but a group of potential triggers. What we can do is look for clues about what might be some of the most likely culprits for triggering eruptions. Most of those potential triggers are centered around adding heat, mass or volatiles (gases like water vapor, carbon dioxide, etc.) to a magmatic system with eruptible magma. However, what might be the root causes of eruptions and do they differ depending on the size of the eruption? This is where attempting to model an eruption being triggered could offer some clues about the most important factors. Two studies in Nature Geoscience this week help us in understanding how volcanic eruptions of different sizes might be triggered and it comes down to two factors: injection of new magma and the buoyancy of magma. In fact, both studies point to the idea that to produce a very large eruption -- we're talking tens to thousands of cubic kilometers of erupted material (yes, so-called "super-eruptions") -- it is the buoyancy of a large body of eruptible magma that might be the main driver for these eruptions. Both of these studies model subsurface processes in the magmatic systems, but do so in different ways. Caricchi and others (2014) use mathematical models to examine how different styles of magmatic injection could drive an eruption while Malfait and others (2014) use experimental data collected by looking at real samples of silicic magmas to model how buoyancy could trigger an eruption. Together, it appears that our theory that a recharge event (new magma injections) is needed to cause an eruption may require modification. Caricchi and others looked at how changing rates of new magma injections could effect the state of pressures within a magmatic systems. Most all magma is stored underground, so it has the pressure of the overlying rocks pressing down on it (roughly 4.4 meters of rock presses down on you as much as the entirety of the Earth's atmosphere above you), preventing an eruption. The pressure within the magmatic systems must exceed some critical pressure to allow magma to reach the surface and erupt. They assume two main methods to cause an overpressure: (1) adding volume by new injections of magma or (2) adding buoyancy to the magma by addition of volatiles and crystallization. Crystallization of a silicic magma will increase the volatile content of the liquid magma that remains, so the eruptible magma can be concentrated in volatiles, making it less dense. If you model high rates of magmatic intrusion at a constant rate, then the pressure of injection (additional volume in a confined space) alone can exceed the critical pressure, causing small but frequent eruptions. However, if those intrusions are sporadically introduced, the volatiles can concentrate and raise the buoyancy of the magma chamber as it stews, leading to the pressure of buoyancy to exceed the critical pressure. Considering that small eruptions have not tapped that reservoir, a much large volume of magma can erupt. If the rate of intrusion is low, it doesn't matter how it arrives: the critical pressure is never exceeded and instead you produce a pluton (magma crystallizing underground).

A graph showing the relationship between eruption volume and time between eruptions, using the models presented in Carrichi and others (2014). Notice how for buoyancy-driven eruptions (in blue), the time between eruptions doesn't vary much across a wide range of volumes. Image: Figure 3 from Caricchi and others (2014), Nature Geoscience. One of the most interesting implications of Caricchi and other's model is that if you use the buoyancy endmember for eruption triggers, the average recurrence interval of large eruptions (10s to 100,000s cubic kilometers) is between 100,000 and 1,000,000 years (see figure, above) -- which isn't unreasonable for caldera-forming eruptions. This is independent of whether the eruption is tens of cubic kilometers of hundreds of thousands of cubic kilometers. However, the timescales overpressure due to injection varies greatly depending on the size of the system, from months to millennia. Malfait and others (2014) tackled the question of the buoyancy of magma, and this buoyancy is driven by density. You might think we already know the density of rhyolite magma, which is true, except that we know it at surface pressures and temperatures. How does it change at depth with increased water contents? These are the conditions that are necessary to understand eruption triggers within a magmatic systems. Malfait and others (2014) used experimental data of samples of silicic magma held at high pressures and temperatures in order to measure those densities and they found that in magma with upwards of 7 weight percent water at ~30 kilometer depth pressures, the density is only ~2000-2200 kg/m^3. This is much lower than the surrounding continental crust, which is ~2700 kg/m^3. This means the magma will be very buoyant and want to rise. Put a thickness of ~8 km of silicic magma (see figure, below) in the crust and it could produce sufficient overpressure to exceed the critical pressure and cause an eruption -- and put that magma even closer to the surface, thus lowering the critical pressure, and it might be even easier to produce an eruption via buoyancy. This idea has been presented before in a study by Gregg and others (2011), where the overpressure also helps weaken the overlying rock, leading to eruption.

The relationship between buoyancy overpressure caused by magma and the thickness of the magmatic body using the models from Malfait and others (2014). For silicic magma with no water, a thickness of 8 km is needed to reach critical overpressure, while magma with water might need as little as 3-4 km thickness. Image: Figure 3 from Malfait and others (2014), Nature Geoscience. This means that merely constructing a body of rhyolite magma in the crust could be enough to cause an eruption without any recharge by new magma needed. Malfait and others (2014) look at the Yellowstone magmatic reservoir as we know it and conclude that there isn't enough melt present to cause anything close to overpressure. However, the pressure will constantly increase as the magmatic systems continues to cool -- so either the magma will cool completely and solidify before eruption or another eruption could occur -- and all bets are off if there are new intrusions of magma. These two studies lead to some interesting implications for understanding the cause of volcanic eruptions. As I mentioned before, it looks like there is no need for new injections of magma to cause a massive eruption -- all you need is the slow increase in buoyancy of the silicic magma. They also suggest that volatiles are indeed the most important player when it comes to eruptions, both in terms of causing explosive eruptions but also driving the eruption in the first place. At the Lassen Volcanic Center (LVC), we have one very large eruption, the Rockland Tephra. It stands out because it is the only very large eruption in the LVC and it was early in the history of the modern Lassen Field. These new studies might suggest that changes in the timing of recharge events from irregular to regular during the development of the magmatic system allowed for the change from very large eruptions to frequent smaller eruptions. In terms of volcano monitoring, these studies would suggest that knowing the physical state and size of the magmatic system under a volcano is paramount to predicting potential sizes of eruptions. This could be accomplished by seismic studies at large volcanic systems to image the magma. However, we would also need estimates of the volatile content of the magma, a much harder thing to do, likely through melt inclusions in minerals or examining degassing patterns. This means that we still haven't found the secret to predicting eruptions (not by a longshot). One final implication: as Lockwood Dewitt mentioned on Twitter, this could finally allow us to differentiate "super-eruptions" from small eruptions -- that is, eruptions triggered by buoyant overpressure rather than injection overpressure. It could be difficult to back out the exact trigger mechanism for past eruptions, but we could look for evidence (or lack thereof) of new injections of magma in the erupted material to tell them apart. Interesting idea, but we'll likely need to take these models and figure out how to apply them to real volcanic deposits. Overall, the studies by Caricchi and others (2014) and Malfait and others (2014) give us some fascinating new directions to examine to understand the triggers of volcanic eruptions. Neither of these studies say we're closer (or further) from the next massive eruption, but now we know it doesn't take new magma to get the action to start. References Caricchi L, Annen C, Blundy J, Simpson G & Pinel V, 2014. Frequency and magnitude of volcanic eruptions controlled by magma injection and buoyancy, Nature Geoscience. doi:10.1038/ngeo2041 Gregg P, de Silva S, Grosfils E & Parmigiani JP, 2011. Development, evolution and triggering of supereruptions, Geological Society of America Abstracts with Programs, Vol. 43, No. 5, p. 651. Malfait WJ, Seifert R, Petitgirard S, Perrillat J, Mezouar M, Ota T, Nakamura E, Lerch P & Sanchez-Valle C, 2014. Supervolcano eruptions driven by melt buoyancy in large silicic magma chambers, Nature Geoscience. doi:10.1038/ngeo2042