When Is A Planet A Planet? 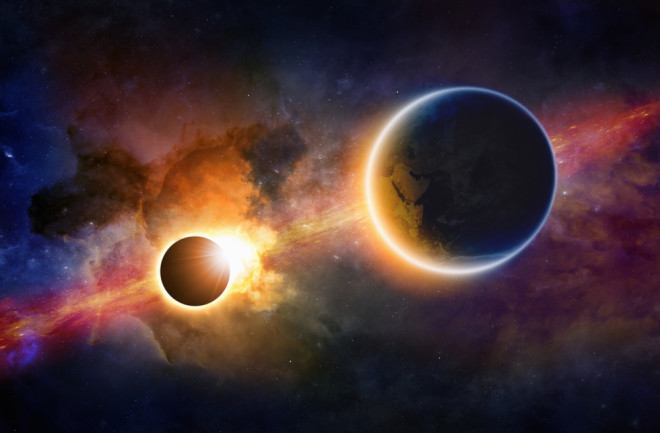 On a basic level, it seems that most of the universe can be divided into two kinds of big objects: stars and planets. A star is a massive ball of burning gas whose main function is fusing hydrogen into helium. They are formed by huge clouds of gas that eventually come together in sufficient quantities to kick off nuclear reactions. Planets, in turn, come from the material left around the star after its formation. They form from small bits that clump together into protoplanets which in turn smash together to form the large objects we see today.

Most other objects in our solar system — asteroids, dwarf planets, comets, and the like — are leftover building blocks of planets that never quite came together. “Large objects that are formed from dust clouds around a star” is usually the quickest, dirtiest way to define a planet. Except when it isn’t. Some objects fall in an odd in-between — not big enough to be a star, but too big to be planet. And other planets might never have formed around a star at all.

The absolute lowest mass we believe a star can be while still being a helium-fusing cauldron is around 7 percent the mass of the Sun, which is roughly 73 Jupiter-masses. Similarly, the upper limit of an object that forms like a planet, at least as we understand it thus far, is about 13 Jupiter-masses, or 0.012 solar masses. (Jupiter is almost 1 percent the mass of the Sun, but not quite.)

In the territory between 14 and 72 Jupiter masses are objects that astronomers call brown dwarfs, and they are neither stars nor planets. Scientists believe they form like stars, but never gain enough mass to begin the hydrogen-to-helium fusion process. Instead, they convert hydrogen into a heavier isotope called deuterium, a process that produces far less energy. Brown dwarfs have been found at a range of temperatures — up to about 1,900 degrees Fahrenheit and dipping down to several degrees below zero — and give off very little light, so most telescopes hunt for them in infrared rather than visible light.

The first official published literature seeking to explain the divide between stars and planets came in a 1962 paper by Shiv Kumar, who wanted to explore what happens with very low mass stars — those below 0.1 solar masses. He determined the 0.07 solar mass limit and termed everything else a “black dwarf.” Other early literature clumps in everything below the helium-fusion limit as a “substellar object.”

An artist's conception of a brown dwarf. (Credit: NASA/ESA/JPL)

It wasn’t until the 1980s that researchers began finding candidates for brown dwarf status, and not until 1995 that any detections were certified when Teide 1 and Gliese 229B were both confirmed as brown dwarfs. This came in the era where the first exoplanets emerged, and caused a heated debate.

Astronomers were finding objects in planet-like orbits around stars, except they were too large to be planets. The smallest brown dwarf reported in the first few years of exoplanet discoveries was a 17 Jupiter-mass object around the star HD 110833. While brown dwarfs may orbit like planets, it’s more likely that they formed alongside the parent star and never gained enough mass to ignite. But sometimes, something remarkably planet-like could form without a star at all — a sort of mini-brown dwarf.

The search for planets outside our solar system has led to the discovery of a few real oddballs. Perhaps the oddest place to find planets, though, is outside of a planetary system entirely. These free floating planets — sometimes called rogue planets — are usually around 5-10 Jupiter masses.

We’ve only ever discovered a small handful because they give off no light of their own, or at least very little light in visible wavelengths. But a few have turned up in infrared observations, their position given away by the heat their rotation creates. There are two possibilities for how these objects got there. The simplest explanation is that they were simply normal planets flung out of their home system by gravitational interactions with other bodies. But, more intriguing is the possibility that they formed exactly where we found them from a cloud of gas and dust, but independent of any star. If that’s the case, then despite being planet-sized, they never really formed like a planet at all. If a brown dwarf is a failed star, you could consider these failed-failed stars.

“My working theory is that they’re a mix—some of them could be planets that formed in disks and got flung out and others could be leftovers of star formation,” Caroline Morley, a Sagan Fellow at Harvard University says. Morley studies rogue planets. Their masses can be elusive, especially if the planet isn’t orbiting another object. (A good way to estimate mass is to study how much a planet or brown dwarf “tugs” on its home star at their shared point of gravity.)

One of the ways she says we can study free floating planets and figure out if they’re a “true” planet or not is to study how they move in relation to other objects in the region. A rogue planet in a moving group with other stars and brown dwarfs may have formed like a star, while an ejected planet may be speeding away on its own trajectory.

There’s also the matter of heat. Even if an object that formed independently of a star isn’t big enough to be a brown dwarf, it may still have a lot of heat leftover from its formation. Most planets may be a bit cooler, depending on their age. But there are some objects that appear to have formed on their own and yet seem remarkably cold.

“Right now there’s no good name for it,” Morley says. “Most people call it a really cold brown dwarf.”

The easiest way to determine the nature of rogue planets will be to peer at them with the James Webb Space Telescope and actually look at what they’re made of. A more brown dwarf-like composition could mean that they formed from a collapsed gas cloud rather than being a planet flung out from its home system.

There is another possibility for some free floating planets, though. Perhaps some didn’t form like either a star or like a planet. Instead, they may be giant clouds formed in times of violence. When a star encounters a black hole, all hell breaks loose. The black hole siphons gases off the star in something called a tidal disruption event, and its far from a clean meal.

According to a 2017 study by Harvard undergrad Eden Girma, you could produce planets — or something like them — from the debris created when a supermassive black hole consumes a star. Essentially, the jets of matter that the black hole ejects create one or two Jupiter-mass clouds of gas. They’re planet-sized, but don’t form pebble-by-pebble, and almost certainly bear little resemblance to small brown dwarfs. Instead, they puff out of a violent assembly line.

Like rogue planets, these “planetary-mass fragments” are alone out there — and would be moving even faster than ejected rogue planets, sometimes on a trajectory out of the galaxy. A tidal disruption event at a supermassive black hole could produce anywhere from 1,000 to 10,000 of these objects.

Finding them could be a different matter — they would cool quickly and thus be mostly invisible, and even if we were able to spot one, it might be hard to discern one of these objects from a relatively small rogue planet aside from its velocity.

Some planets exist where we wouldn't expect to find them at all — around neutron stars. Neutron stars are the cores of giant stars that have gone supernova, condensing into a city-sized chunk of neutron matter. (Some larger supernova stars become black holes, depending on the original mass of the star that formed them.)

The most well known kinds of neutron stars are called “pulsars” for the way they “pulse” in regular intervals. While they may seem like one of the least likely places to find planets — after all, a supernova destroys nearly everything in its path — a small handful have been discovered. Astronomers search for planets around pulsars by looking for disruptions in its regular rhythm caused by an orbiting object. Since many pulsars don’t do this, we don’t think there are many there.

“There are three different systems that have pulsar planets, and each of them are thought to have a different explanation for how they formed,” Rebecca Martin, an assistant professor in astronomy and physics at the University of Nevada, Las Vegas says.

In 1992, two planets were announced around the pulsar PSR B1257+12 and a third planet was announced in 1994. One of those planets is about the mass of the Moon, making it to this day the least massive known exoplanet. The other two are in the class of planets known as “super-Earths,” planets at the upper limits of rocky planets.

The planets are shockingly ordinary given their residence in an extreme environment, orbiting on the same plane like planets around ordinary stars that form from debris disks. Any planets in that extreme environment should have been obliterated. Instead, Martin says, the matter may have come from an unlucky binary star. The pulsar siphoned gas off of this companion, accreting mass and littering the area around it with gasses that then move like a debris disk. This then clumped into planets and perhaps even left behind something of an asteroid belt.

And one pulsar plane may not have formed as a planet at all. The planet PSR J1719-1438 b is slightly more massive than Jupiter — but its actual radius is much closer to Uranus. That leaves it nearly 20 times as dense as Jupiter. It’s so dense and has so much carbon that it’s been called a “diamond planet.”

“[Astronomers] think that that’s the remains of a white dwarf, which is why it’s so dense,” Martin says. White dwarfs are the cores of smaller stars like the sun, and the best explanation for 1438 b is that it formed like one only to lose mass until it was roughly the mass of Jupiter. It’s only fourth the mass of the least massive known white dwarf. Though 1438 b was once likely a star, by most common definitions, it is today a planet.

Large telescope facilities may help us best determine which planets didn’t start out like planets, or find objects intermediate between a planet and a brown dwarf. “We’ve found lots of things that immediately straddle across that boundary,” Morley says. Figuring out which is which will require intensive observations, and will maybe turn up a few oddities along the way.

But the era of big telescopes could end up further blurring the line between a “traditional” planet and something that simply superficially resembles one according to our best understanding of planetary formation. We may also confirm planets that formed in traditional ways but were radically transformed.

There are a few suspected “Chthonian planets” which formed as gas giants but had their gas envelope removed, leaving behind a dense rocky planet. The “what makes a planet” debate is old — and the coming decades will settle a few questions but possibly open up so many more. After all, in a seemingly endless universe, what other oddities are hiding out there somewhere?