When did Earth's oxygen atmosphere appear?

In my book Death from the Skies!, I described Earth's first mass extinction event: the evolution of bacteria that were able to ingest the primitive atmosphere of the time, and excrete oxygen. To these little beasties, oxygen was a lethal poison, and when enough accumulated in the atmosphere, it killed off a lot of our planet's nascent life. They couldn't survive their own waste (and, as I point out in the book, take home whatever cautionary tale from that you like). The survivors were ones who could use this new molecule to their advantage. Billions of years later, those survivors became us. But how many billions of years? Current thinking is that this event happened about 2.7 billion years ago. But new data seem to indicate that this event may have happened earlier than that. A lot earlier: like 3.5 billion years ago. This new data comes in the form of geological core samples containing hematite, a mineral that forms either through aerobic processes of bacteria (that is, biology using oxygen) or through photolysis (chemical changes from light) due to sunlight. But that latter happens only near the surface of water, and the hematite in the core samples seem to be from too deep in water to be from photolysis.

The new data are controversial, of course. It's one thing to push back a date for an event like this, but another entirely to do so by 750 million years! A lot of current evidence points to free oxygen being produced 2.7 billion years ago. Clearly, either one or both of these measurements is wrong. Sometimes, when I hear a controversy like this, I wonder if they're both in fact right: maybe there was free oxygen produced at the earlier date, and it went away for a time due to some mysterious event, and then came back 700 million years later as cyanobacteria rediscovered how wonderful oxygen is. I'm just talking out of my hat there. Usually in science, when there are two contradictory sets of data, one turns out to be wrong. Misinterpreted or dated incorrectly. But not always. The fun part of this will be the arguing that goes on between scientists as they try to figure this one out. My advice for them: before arguing, take a deep breath. And whoever turns out to be right, remember just why you can take that breath. There's no way that, all those eons ago, those little bacteria could have known that their distant descendants would ponder their very existence. But life's funny that way. 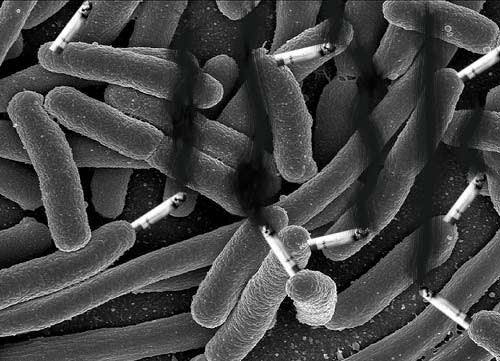 The real reason all the good air went away.